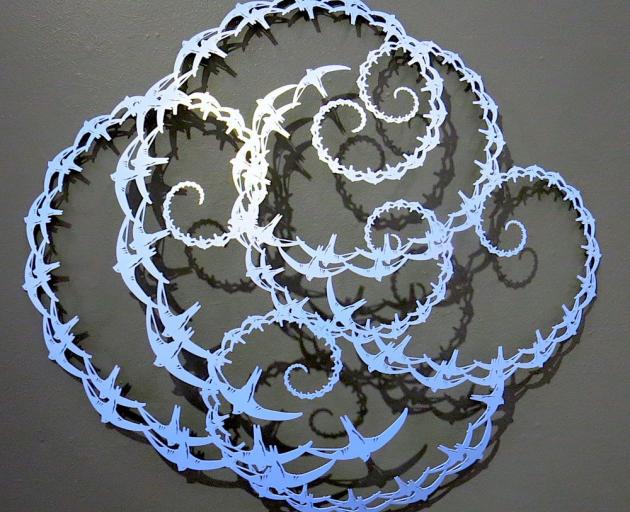 Neil Dawson is arguably the country's finest creator of metallic public sculptures, his work gracing locations from Dunedin Public Art Gallery's atrium to Wellington's Civic Plaza. He also works on a smaller scale, producing playful intricate geometries of painted steel, and it is these which currently grace Milford Gallery.

Dawson's work makes use of natural and structural motifs which he replicates to produce fractal-like patterns. Ferns and swallows become entrancing traceries, the sculptor's bowed and spherical works creating doppelgangers of shadow which enhance the effect of the steel.

In several pieces, such as Murmur Dome (Silver), the rear side has been powder-coated in rich colour to tint this shadowy companion, producing a warm radiance behind the sculpture.

Colour is also of importance in several of the architecturally inspired Mirror works, the differing hues turning the symmetry of the pieces into solid form and reflection. These sculptures, which are based on the architecture of the Milford Gallery's exterior, are a playful examination of where an art space begins and ends.

A more sombre yet powerful work is the double spire of Phoenix, one of the Christchurch-based artist's meditations on what the city lost in substance and gained in strength in the 2011 earthquake.

In her current exhibition, ''Utopia'', we are presented with a series of such images, ranging from the near-realism of her Ngataringa works to the ebullient abstraction of The Spark and Valbonne. The emphasis of these paintings is not so much to duplicate the flowers as they appear, as to capture their essential nature, to try to recreate the feeling of being surrounded by colour on a warm summer's day.

Stringleman works by creating images in charcoal, then blurring and drawing over these lines before applying thin veneers of oil paint. Finally, heavy, heady slabs of flat colour are placed over this to complete what is as much a palimpsest as a canvas.

Many of the works on display take their titles from mythical fantasy lands - Shangri-La, Xanadu, Arcadia - as if to suggest that these worlds of colour and flower are not real, but are an embodiment of what we would wish such worlds to be.

The exhibition is completed by two nude studies, each of which uses a similar synchromism-inspired approach to produce memorable art. 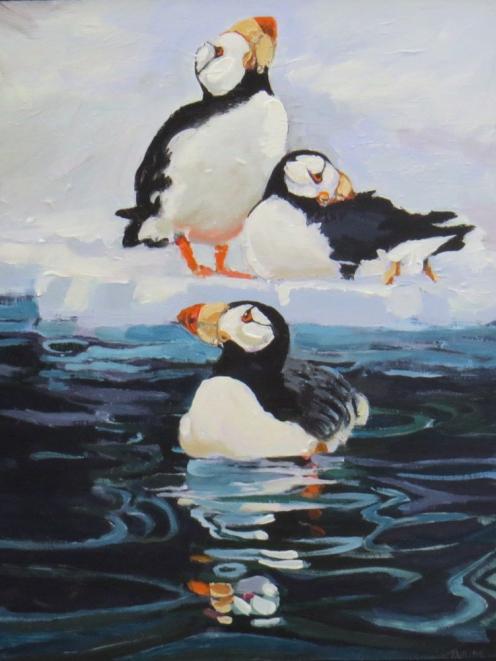 A trip to the United States' northern frontier has energised Pauline Bellamy into producing a fine series of works based on the trip north to Alaska.

Alaska is simultaneously challengingly different yet somehow familiar. A remote land of forests, wildlife and small settlements, it is in some ways like Fiordland with the dial turned up to 11. At the same time, it has the air of a somewhat forgotten outpost of America, known for its extreme cold and usurped for its mineral wealth, but otherwise largely ignored.

It is this atmosphere and these contradictions which pervade much of Bellamy's work. The astonishing scenery captured in images such as Glacier Bay and Bry Mwy Glacier sits uneasily yet appropriately against the drab cityscape shown in Ketchikan Rain and the head-on meeting of animal and industry in Black Bear, Anchorage. It is, to some extent, the animals which win out - in this exhibition, even if not in reality - with an impressive series of etchings of Alaskan wildlife and painted bird studies.

The scenes of Alaska's wilderness are particularly fine, whether they be naturalistic (as with the exhibition's lovely titular work) or reduced to the heavily stylised forms of ice floe and reflecting water epitomised by Leaving College Fjord.