Taking refuge down the bay 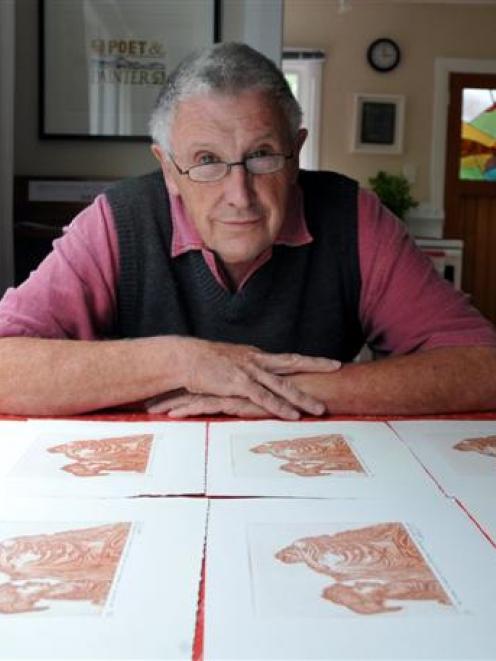 Printmaker Barry Cleavin has been taking a breather in Broad Bay as the Caselberg Trust artist in residence. Photo by Gregor Richardson.
Barry Cleavin's works may be uncomfortable but it's not the way he likes to live. Charmian Smith talks to the Christchurch artist who is enjoying refuge in Dunedin at the Caselberg cottage.

There's a strain of melancholy in printmaker Barry Cleavin's work. Irony too.

Over five decades his prints have recorded follies, played with words and imagery, depicted intricate skeletons and skulls. Sometimes what's going on is quite vicious.

But from time to time, artists need to sit back and reassess where they are up to, he says. The Christchurch-based printmaker has had the opportunity to do that this month, as the Caselberg Trust artist in residence for March.

He and his partner, artist Dee Copland, have been enjoying the refuge of the Caselberg cottage at Broad Bay, close to the water and with bellbirds in the garden.

In Dunedin, he has been drawing not only his grotesque, detailed skeletons and sometimes vitriolic sketches of ''turkey'' and ''donkey'' instead of John Key, but also more traditional drawings of coastlines and jetties on Otago Peninsula.

''You come to a place like this and you can't be vicious about what you see down there on the coastline, so I've been doing more the type of drawing that anyone else might do, of something that is quiet and contemplative,'' he says.

''The track of my work hasn't changed that much. It oscillates between more and less vitriolic commentary. I don't know how it's emerged in me, something that seeks to record follies, which usually involves something of the literary and on the other side something I like to think of as being unashamedly graphic.''

He shows recent etchings playing on the saying ''the elephant in the room'' with a ladder leading up to ''a room in the elephant''. In Dunedin, he has made etchings showing the Queen Victoria statue from Queens Gardens meeting the Alice in Wonderland Queen of Hearts from Larnach Castle.

But for decades he has been fascinated by bones and skeletons. A series of works from the mid-1990s entitled ''Hungry Sheep'' are detailed etchings of a ram's skull he found on a beach at Moeraki where he has a holiday house.

''That sheep is not an inert sheep. It's actually shouting. And as we know, in space there's a vacuum and there's no sound, so I look at it as a soundless moan coming from the thing. Every time I drew it and even when I print it, I try to get that sense of its departure, and if you get its sense of departure, then you have a sense of your own. This is our lot, there's no escaping this thing. Although I am a great escapist I do know there's not one way I can negotiate my way out of that.''

He admits to being of a melancholy turn of mind and the sense of memento mori (remember you will die) pervades much of his work.

However, he says, of skeletons, ''if a person gets past the memento mori thing that you are going to die tomorrow, they are a sublime form of sculpture, the way they lock in together, they way they actually form shapes. Bones are not inert dead things - they just happen to be extremely beautiful. Bird skulls I just love.''

He has drawn many animal and bird skeletons from both Canterbury and Otago museum collections, and is hoping to find the bagpipes that ended the siege at Lucknow, which he remembered seeing as a child in the Otago Settlers Museum.

Although he's lived and worked in Christchurch for 50 years, Cleavin (73) was born and grew up in Dunedin and says he feels his heart is here - partly because Dunedin cardiac services have kept him alive, he says.

''I have no family alive here, but I have memories of my grandfather going up Stuart St and my grandmother living in Graham St - just a sense of place.''

At King's High School, there was ''no such thing as art and a peculiar disposition towards music - essentially it was a sporting school. I didn't mind sport at the time and I don't mind it now, but it wasn't what I needed,'' he says.

While there, he decided to explore the printmaking room and that has become his main medium for the past 50 years. He taught art at high school, polytechnic and Canterbury University until he was 50, then retired to work on his art.

More recently, the aftermath of the Christchurch earthquakes has taken its toll.

When he and his partner tried to get help to fix the broken foundations of their Papanui house they ended up feeling like personae non grata. They have also found it difficult to live without a library or art gallery.

''You have no idea how difficult it is to live without a library, living with pop-up art with no sense of history involved. History is what happened yesterday on the street corner when someone has put up a painting - this is a bit devilish - but you are meant to be thrilled to see something go up on a wall in the city.

''They can't do what they can't do, I know that, but I need to be fed in other ways and I believe other people do too.

''It isn't all whoop ourselves up for a while and we'll feel better and have a few lights in the park and perhaps the 1812 Overture. It's not the way my mind wants to operate, so that's been a difficulty.''

The couple spent Christmas at Harington Point on Otago Peninsula and saw a house for sale in Portobello with space for two artist studios and print workshops, bought it, and will move permanently to Dunedin in the middle of the year.

Cleavin felt dreadful when he told his friends, many of them artists of his own generation, that they were moving, but now some of them are thinking about moving too - it's just that they want a form of stability, he says.

''The sociology of the artist in relation to the society they live in, the earthquakes have actually destabilised that, no matter the goodwill of putting things on street corners and so on. It's still somehow another stop to the continuum of creativity.

''Besides the earthquake and external circumstances, there's the notion of not enough time. When a person is making things, I think they have in their mind that it will go on, but there are so many things to solve, there are too many things to draw, too many things to actually write down and think about, and you've got your allotted span - memento mori,'' he says.