Veges and other musical fun 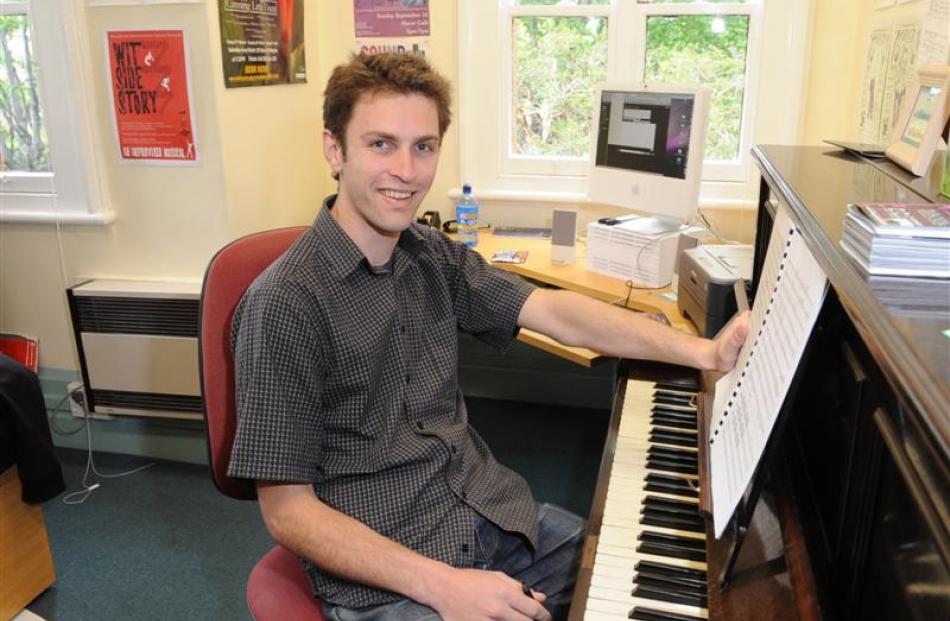 From composing orchestral music to performing comedy and improv, Robbie Ellis is a versatile musician. Charmian Smith talks to the 2012 Mozart Fellow at the University of Otago.

When Robbie Ellis learned he was to be 2012 Mozart Fellow at the University of Otago, he offered to write music for many different people, so it's been a busy year.

Not only has he been composing for orchestras and other groups, he also performs, writes songs, accompanies Dunedin improvisation troupe Improsaurus and runs Song Sale. Song Sale is a monthly event at which people can, for $5, commission songwriters and performers to write and perform music on any topic or in any genre they wish. The musicians go out the back, write their piece and perform it later in the evening. The last Song Sale for the year takes place next Thursday, which happens to be Ellis' 28th birthday.

"It's an idea that started in Wellington last year and I liked the concept so much I thought, 'let's bring it to Dunedin'.

It's good fun and gives an innovative performance opportunity to different types of musicians and creative people - composition students, composers, singer-songwriter types, comedians, theatre improvisers - and combine them all in together. Not everyone can play an instrument but some are lyrically clever,'' he says.Sometimes he revisits a song, as with his root vegetable opera.

"Someone wanted a song about root vegetables in the style of opera and I performed it again at a lunchtime concert in Marama Hall. It's a massively overblown tragic thing. I had Corwin Newall as piano accompanist, as I needed all my powers for my untrained voice to hit high notes and present it in a very operatic, overblown way, all the while articulating my words so that everyone can understand everything, unlike a lot of modern English-language opera,'' he says.

Ellis says he would rather write a musical than an opera - although he admits the dividing line between the two can be difficult to draw.

"Basically, if you put on an opera, you are going to have 30 of your colleagues and mates come and say, 'that was interesting'. But if you put on a musical, you can start engaging with the wider world and publicise it as a theatre event and also, you can escape all the horrible snobbery around using microphones, because you just use them. And maybe the language you are writing can be comprehensible for the audience, as it's in their native language. The number of times I've gone to operas which are in English and the words are not comprehensible - I don't know why people do that,'' he says.

"The type of voice training required for opera doesn't make sense in a world where we've developed instruments to such a point where they are louder than what any reasonable human physiology can balance with, but yet we are still turning out voice students to try to compete with that. It distorts their voice and makes the language sound very strange and it's not the sort of thing I want to be associated with too much. It doesn't make sense to me, when you can mike people up.''

This year he has written three orchestral works. The largest piece is Relish in immature bombast, a concerto for organ, drum kit and orchestra, which will be performed at an Auckland Philharmonia concert in the Auckland Town Hall on May 23, the culmination of a year-long collaboration allowing composers to explore the challenges of writing for organ and orchestra.

"With a drum kit in it, it's got a sort of funk rock bass to it. The big difficulty we've had is that you've got an orchestra that knows how to play together, then you've got an organ that speaks slower than the orchestra and a drum kit that speaks faster than the rest of the orchestra, and getting those two to be in time with each other - recently we had two decent sessions with the drum kit player and organist nailing the piece together before they meet the orchestra. It reached a point in the last session that we managed a full run of the 12-minute piece uninterrupted, with no screwing up. It's got to the point where they are secure enough that they are discussing what they are going to wear in the concert. The current thinking is brightly coloured suits and aviator sunglasses!"

Ellis also hopes to complete a work for Dunedin duo Tessa Petersen and John Van Buskirk, and is working on music for comedienne Penny Ashton's one-woman Jane Austen show that he will record in Albany Street Studios. He is one of the few New Zealand composers who are also involved in comedy and improvisation and plans to travel to the US and Canada next year to explore the improv scene, rather than return to his former job in Wellington as a producer for the Concert programme of Radio New Zealand.Ellis started composing while at high school in Auckland, it "being less about the front-incentive-virtuosic-performing side and more about the puppet-master-producer-concepts-and-ideas side'', he said.

"I found I had some good ideas and it was worthwhile keeping going.''

lthough he composes in whatever musical style he considers appropriate, he says he likes to think that whatever he is writing "has him in it'' and people who know enough of his music will recognise that.

He loves putting "wonkiness'' into his work, something he calls "out-of-tune tonality'' which he describes as something "you know is meant to be fitting in with some sort of tonal framework, but it sounds wonky''.He likes melodies that aren't immediately singable but are distinctive, and he loves cramming many syllables into a bar or eliding syllables to make new words.

"I like to make it sound authentic. I don't want to distort people's patterns of speaking too much just to fit it into singing, or what we think singing should be. It should always bear relation to how people talk,'' he says.

He identifies with Prokofiev's sense of fun and rhythmic drive and sense of melody. He'd also like to emulate the young Prokofiev, who was the enfant terrible at the St Petersburg conservatory. He entered his first piano concerto in a competition and everyone hated it, Ellis says.

"That's the sort of fun I really love, though I probably want to be [an enfant terrible] more than I actually am.''

See it, hear it

The last Song Sale for the year is at 7pm on December 13 at The Church on Dundas St, Dunedin.

Ellis says he will perform the 25 songs he has written this year.