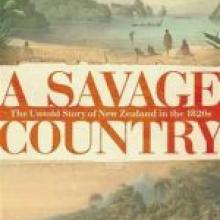 A SAVAGE COUNTRY<br>The Untold Story of New Zealand in the 1820s<br><b>Paul Moon</b><br><i>Penguin</i>
Our fascination with the early contact period seems endless. In recent decades historians Binney, Wolfe, Wright and Moon have released monographs on the period, supplementing several biographies of missionaries and their families as well as collections of letters.

So do we need more publications?

The answer is yes, if they are written to the standard of the two books under review. Vincent O'Malley and Paul Moon have doctorates and have studied the period extensively. Just as importantly, they know how to write succinctly for a lay audience, largely avoiding ugly academic jargon.

Paul Moon's A Savage Country probably offers less to subject specialists. The blurb describes it as completing the trilogy begun by Fatal Frontiers and by The Newest Country in the World. As he admits, selecting one decade is an arbitrary decision. 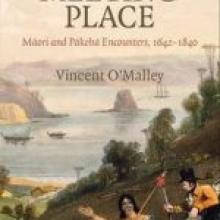 THE MEETING PLACE <br>Maori and Pakeha Encounters 1642-1840<br><b>Vincent O'Malley</b><br><i>Auckland University Press</i>
But the 1820s were interesting times here. The British Colonial Office had no intention of annexing the islands, but the wider world was washing over the Maori world. While European settlement was confined to tiny enclaves, based around extractive industries such as sealing, whaling, timber or flax, there were even some unsuccessful attempts to plant larger settlements.

A Savage Country takes us through that turbulent decade, as the Musket Wars raged across much of the country, as the Anglican and Wesleyan missions clung weakly to their northern stations, and as warriors such as Hongi Hika and Te Rauparaha established their reputations.

Moon concludes by reminding us that rather than the European world inexorably displacing Maori civilisation "... forms of cultural hybridisation sprouted across New Zealand's cultural landscape."

That is a message that The Meeting Place teases out in more detail.

O'Malley's book covers a much longer period, 1642 to 1840, and is intellectually more challenging, offering an in-depth examination of the production of culture during the pre-colonial era.

A veteran of the Waitangi Tribunal process, O'Malley emphasises that culture is not an impenetrable and unyielding fortress, but something that can be "created, defined and 'articulated' in the encounter situation." In other words, by coming into contact with each other, Maori and European changed the way each saw the world.

By exploring economic, sexual, religious and political cross-cultural encounters, O'Malley explores the mutual accommodation that each side created before the settler influx created by annexation swept it aside.

It is an exciting story that does away with arbitrary binary relationships and old ideas of "traditional" Maori culture.

Taking Greg Dening's idea of "the beach" as a space that everyone had to cross in order to construct a new society, O'Malley borrows an American concept of the middle ground.

In a chapter examining the political world before 1840, O'Malley attaches less importance to "exaggerated missionary depictions of widespread disease and depopulation" among Maori driving the march to Waitangi in 1840.

Instead, he places greater emphasis on the ability of a Maori chiefly culture that was more consultative than often portrayed developing new relationships with traders, settlers and with the British Government.

O'Malley takes us through the "murder, mayhem and massacre" so familiar to readers, but also stresses that encounters on the New Zealand frontier "could also bring genuine love, lust, or just plain friendship across racial lines".

The middle ground flourished for as long as Maori and Europeans felt a need to make accommodations with each other. But once settler numbers surged, "Maori would be required to dance to their tune". The middle ground evaporated, although it lingered longer in more isolated parts of the interior, and, of course, in the hearts of individuals.

O'Malley's Treaty work anchors his view of the past to the present, so not surprisingly, he concludes the book by quoting the old Maori proverb about walking backwards into the future. High Maori birth rates and growing economic power may lead to a new middle ground as people "again find things of value in each other that cannot be obtained by other means." My main reservation is geographical.

In his introduction, O'Malley says that nearly a third of Europeans in New Zealand by the late 1830s lived in and around the South Island whaling stations, yet pp. 87-92 offer the only solid chunk in a text of more than 230 pages. While sources pose problems, Peter Entwisle, Ian Church, Sheila Natusch and others have shone some light on Murihiku's early-contact past.

• Gavin McLean is a Wellington historian.