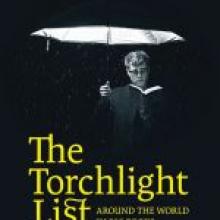 An edited extract from Prof Jim Flynn's latest book The Torchlist List: Around the World in 200 Books.

Britain and her empire (the (93rd on the list): Blackwell Classic Histories of England begin with the Saxon kings and run all the way to the present House of Windsor.

Particularly touching was the last attempt of an English king (William IV) to rule as well as reign.

Charles Dickens portrays England just as the stagecoach gave way to rail and she entered the industrial revolution.

He has a lively sense of sympathy with its victims.

If you must read only two of his novels, try (94) Tale of Two Cities, which will give you an English perspective on the French Revolution, and (95) David Copperfield, which is autobiographical. Dickens's mother, at a time when she was finically desperate, sent him to work in a shoe-dye factory and wanted him to stay at work when his father, a few months later, got out of debtors prison. He never forgave her.

From childhood he dreamed of being a gentleman, and although he deplores the fact that Pip in Great Expectations became a snob, he never questions the class hierarchy of Britain.

America is the story of ethnicity and race and unusual opportunities to make money.

England tells something of the same story with opportunity less present and everything overlaid with class, its upper classes strange, aloof, never doubting their prerogatives.

Howard Spring's (96) Fame is the Spur is worthwhile, because of its moving account of the British working class at the end of the 19th century and how they tried to better their lot in the 20th.

The sword of Peterloo is a symbol of their oppression.

It was captured by a worker at the Peterloo massacre of 1819, when British mounted troops used swords to cut down working people who had peacefully met to express their grievances.

The book tells of the rise of the trade union movement and the Labour Party and the suffragettes (and the vicious things that were done to them).

Cecil Woodham Smith's (97) The Reason Why tells how the aristocracy could buy the right to outfit a brigade and lead it into battle.

But it is not just the suffering or the privilege: it is the attitudes.

There is reason to believe that the Light Brigade charged into the valley of death because Lord Cardigan misinterpreted the orders of Lord Lucan.

But Lord Cardigan was not speaking to Lord Lucan and would not humble himself to ask for clarification.

In Barbra Tuchman's (98) The Proud Tower, read the vignette on Keir Hardie. His employer dismisses him, a child of eight, the only member of his family in work.

Tuchman has written a wonderful history of the early days of World War 1, (99) The Guns of August.

The common cause of the war did not bridge the gulf that separated the classes.

Lord Curzon, a leader in the War Cabinet, observed British soldiers bathing: How is it that I have never been informed that the lower orders have such white skins? A pity the lower orders were useful as servants. Otherwise these strange white-skinned creatures could have been kept in zoos.

He describes those who live among ordinary Britons as if surrounded by aborigines, and think nothing of the fact that they wear several men's clothes, eat several men's dinners, occupy several family's houses, and live several men's lives. They thought nothing odd about privilege without responsibility.

Eton, Oxbridge, a club in town, London in June, the moors in August, pheasant shooting in October, Cannes in December, and hunting in February and March.

George Orwell in (101) Road to Wigan Pier ranges broadly over the North during the great depression (do you realise that people on the dole actually buy ice creams).

The North-South divide is still alive in England.

The psychological barrier between the classes persists, though not as bad as during the 1970s.

I met a worker who got top marks in a management course.

After two such courses, he realised he was destined to take them forever.

The firm simply did not know what to do with him: no-one had ever moved from the shop floor to management.

There were five tearooms to ensure that no class ever defiled another.

The English are masters of the comic novel.

Evelyn Waugh wrote Vile Bodies, Scoop, A Handful of Dust, and The Loved One.

After Brideshead Revisited, his serious novels got too serious as he became determined to proselytise for Catholicism.

In (102) Decline and Fall, an architect views every home he designs with unspeakable disgust.

The only creation that pleased him was a chewing gum factory.

Jim hesitates to enter a darkened room: his department head may be at a characteristic hobby like watching phosphorescent mould.

When intoxicated he gives a public lecture forced on him by his professor.

His voice gradually approaches the tone of a Nazi at a book burning reading excerpts from the work of a Jewish communist author. Set in 1950, Jim's poverty illustrates how recently Britain achieved affluence.

David Lodge in (104) Changing Places does the same with nice touches: the useless department head revered because he did something in the war - no-one is quite sure what.

It is about Edward and Florence, a couple very much in love, who fall apart because they are sexually naive, untouched by the sexual revolution of the 1960s.

The brief account of the life Edward was to lead thereafter is a snap shot of how the lives of ordinary Britons altered from 1960 to the present.

Both Scots and Welshman rather resent the image of their countries conveyed by Decline and Fall (Waugh's comic novel noted above).

Paul Pennyfeather is a divinity student expelled from Oxford for indecent exposure.

Its theme is that the Welsh have been known from time immemorial as unclean, and thus have retained their racial purity.

Richard Llewellyn was born in England but was of Welsh lineage and visited Wales infrequently.

His heart was located there and the result was a novel that is pure poetry, namely, (106) How Green was My Valley.

Huw Morgan reminisces in very old age about the Welsh village of his youth as it was in the late 19th century.

The valley gets less green as the slagheap from the coal mines grows.

Owner versus union divides the valley, his father and older brother are killed.

Indeed, by the time he leaves the valley everyone he loves has been killed or moved away.

She lives through her control of a coterie of her pupils: "Give me a girl at an impressionable age and she will be mine for life."

She teaches them what she considers important, art and admiration of Mussolini and Franco, and charts their lives whether going to bed with one of her lovers or dying in Spain for the Fascists.

The characters are drawn with impeccable skill.

Two novelists have each written a multi-volume series tracing English life over many decades.

C. P. Snow's Strangers and Brothers is about Oxbridge intellectuals but their lives reflect history between the two great wars and after.

The Masters (108) is the best known. Old Gaye who turns every common room tea into a personal feast is a great character (my compliments to the chef). But read (109) The Light and the Dark. Roy Calvert, a charismatic young scholar cursed by manic-depression, recovers the will to live just in time to die in World War 2.

If the last paragraph does not make you weep, something is wrong with you.

Anthony Powell wrote the 12 volumes of A Dance to the Music of Time, which covers English political, cultural, and military life over half a century.

Read the first (110), A Question of Upbringing, in which the narrator begins to tell of his schooldays.

The trauma of 20th-century England has been, as Orwell put it, the loss of an empire that left it a not very important island off the coast of Europe.

By 1918, the sun had set on all the European empires, although it took them 50 years to realise it.

Today, only America thinks it can establish an empire.

Britain was the first nation into the industrial revolution.

It had the naval tradition of an island nation.

It could also sink most of its resources into its fleet because, unlike other European powers, it did not have to maintain a large army on the continent of Europe, once it gave up its territorial ambitions there.

That navy would not have been enough without two other assets: its sense of moral superiority; and the fact that so many Asian and Africa peoples were stunned into thinking that they really were inferior.

For the insidious effects of imperialism, read Mahatma Gandhi's (111) An autobiography: The story of my experiments with truth.

He once believed that the English had a physical and inner strength his countrymen lacked and, despite being a Hindu, experimented with eating meat to see if that was their secret.

An example of what the English thought is Rudyard Kipling's (112) Kim published in 1901.

Kim is the orphan son of an Irish soldier.

According to Kipling, this exempts him from the fate that awaits Indian boys: lively minds until adolescence, but then intellectual torpor, a sort of premature senility, sets in.

Two things swept away the psychology on which empire was built.

First, the notion that Asians could not compete was shattered in 1905, when Japan beat Russia in a war.

In 1942, despite numerical inferiority, the Japanese captured Singapore.

Second, the sense of moral superiority faded with the mindless slaughter of World War 1.

Sebastian Faulks's (114) Birdsong tells how very terrible the war in the trenches was.

Something had collapsed within Europe's psyche.

It was not just a matter of the enormous loss of life.

America lost a similar percentage of its young men killed in the Civil War.

But there had been some point to it: slavery was abolished and the Union was saved.