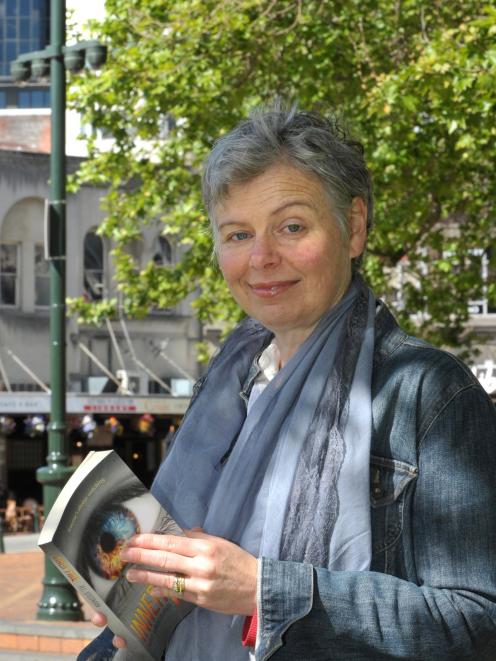 Rachel Stedman believes most people don't think about the closed-circuit television cameras in the Octagon and the same was true of those she saw in Britain last year. The real issue with technology, she says, is the controls over who can access it. Photo by Christine O'Connor
In her new book, award-winning Dunedin author Rachel Stedman plays with the idea of where technology might take us. Kim Dungey reports.

As author Rachel Stedman delved into the mysterious world of surveillance technology for her new book, Inner Fire, she also drew on a real-life encounter with suspected spies.

Back in 2004 the Dunedin woman was with her family near Akaroa when she met three men speaking in what she thought was Hebrew. When she asked if they were from Israel, they looked at her strangely and said yes.

''They asked a whole lot of questions about where we lived and what we did and they wouldn't tell us anything about themselves,'' she says.

About six months later, two Israeli citizens suspected of being agents of Mossad, the national intelligence agency of Israel, were caught trying to fraudulently acquire a New Zealand passport using the identity of an unsuspecting man with cerebral palsy.

A colleague managed to avoid arrest by fleeing the country.

Stedman rang police again and was told they probably were the men she met as there had been other reports of them in the area.

''It made me think about how people think spies are different people but actually they're just the same and they're not any smarter or cleverer than anybody else, it's just that they've had different training,'' she says, adding that three sinister characters in her latest novel were based on the Israelis.

Released in the wake of Edward Snowden's claims of mass surveillance in New Zealand, Inner Fire deals with topical themes such as security and privacy.

The young adult novel is set in England, where a government security system takes feeds from public and private security cameras and uses facial recognition software to match people against a database of criminals and terrorists.

The female protagonist, 16-year-old Corinne Peterson, has moved with her family to London but when strange men start watching her house, she is sent to the country to live with her great-grandmother and meets 18-year-old Rowan, who has troubles of his own.

Corinne's gran shares her ability to draw heat along her body and create fire, an idea that came to Stedman when she asked one of her work colleagues about the medical alert bracelet he wore and heard for the first time about a rare, life-threatening condition.

The man told her he was a carrier of a gene mutation called malignant hyperthermia which causes severe muscle contractions and a rapid rise in body temperature, leading to circulatory collapse and death if not treated quickly.

Stedman found it could be triggered by exposure to coffee, stress or certain drugs used for general anaesthesia and could also occur in animals.

When she holidayed in London last year and found the city had one of the highest numbers of security cameras in the world, the 46-year-old began thinking about how sustained muscular contractions (like those that occur in malignant hyperthermia) could change someone's appearance.

The self-confessed ''technology buff'' thinks surveillance is inevitable and the issue is the controls around who can access it and how it is managed.

Technology interests her partly because it is so pervasive and partly because of people's reactions to it: ''Either people are scared about it and won't have any technology. Or they'll totally use it and don't think about it. But I think that since the Snowden tapes, we're more aware of what we say. I know I am.''

The book contains coarse language and sexual references and is aimed at readers 15 and over.

It was largely written during National Novel Writing Month. The annual internet-based creative writing project challenges participants to write 50,000 words in the month of November.

In retrospect, she thinks the allotted time was too short. Writing the first draft in six weeks (after three months of planning) helped, but she then spent nine months editing because many of the scenes needed to be moved or totally rewritten.

A freelance procurement professional with a background in business and health, Stedman began writing at age 30 because she ''likes telling stories''.

Her first novel, A Necklace of Souls, won a Storylines Notable Book Award and was named Best First Book 2014 at the New Zealand Post Book Awards, but earned her only a ''tiny'' amount of money: ''Most writers of children's literature in New Zealand do it for love, definitely not for financial gain,'' she says.

Inner Fire is her first foray into self-publishing and though she thinks it is the future of publishing, particularly in a small market such as New Zealand, it was more complicated than she imagined.

Recently she had so much going on in her head - a sick child, a report due at work, a Kindle format that had not uploaded properly and her next novel, which is about science, religion and bioterrorism - that she crashed her car driving out of her garage.

''I was driving under the influence of writing,'' she says, laughing.

Perhaps it is no surprise if she were granted superpowers, Stedman wouldn't want to create fire like Corinne but to have the adaptability and dexterity of Elastigirl from The Incredibles.

It's not just that she can turn herself into a parachute that appeals: ''She can grab the washing off the line, grab the kids, form her body into any shape. She's pretty cool.''