It is our writing, even with the notable omissions 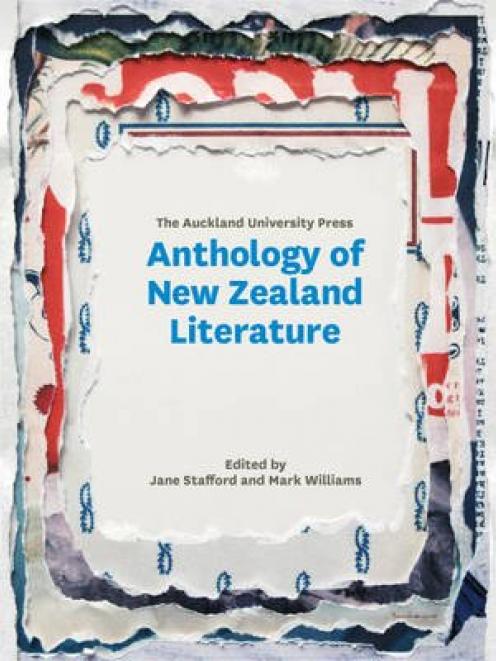 ANTHOLOGY OF NEW ZEALAND LITERATURE <br> <b> Jane Stafford and Mark Williams, eds. </b> <br> <i> Auckland University Press
Weighing in at just under two kg, containing almost 1200 pages, this volume is a big book in several senses: not only is it physically the biggest book to be published in New Zealand last year, but it has also aroused considerable discussion in print, online and on the air, especially concerning who is in and who is out.

The cover and title page, with Anthology of New Zealand Literature in large print in three lines and the preceding The Auckland University Press in small type on a single line above it, imply its status as the first and only anthology to attempt to represent all of New Zealand literature in English in all genres from 1769 to 2011.

As such, it has guaranteed readership of university students taking a survey paper on New Zealand literature, and it is unlikely to have any rival for some years. But the publisher hopes for a wider audience: Sam Elworthy, director of The Auckland University Press, told Andrew Stone of the New Zealand Herald that despite the $75 price, he ''was confident the book would find an eager audience'', and cited the best-selling 2009 Macquarie PEN Anthology of Australian Literature.

Leaving aside the question of how useful the book could be as an academic text, we can concentrate on the question of what the general reader with an interest in New Zealand literature might receive for $75.

One thing the reader will not receive is any writing by Janet Frame, Vincent O'Sullivan, and Alan Duff. The editors had selected texts for all of them but were refused permission to publish them. Duff gave no reason for his refusal, but the other two refusals relate to the editors' principles of selection and arrangement.

To represent Frame's work the editors had selected some poems and some extracts from the novels and autobiographies and had planned also to seek permission to use a passage from the posthumously published novel Towards Another Summer as opening epigraph, but the Janet Frame Literary Trust would not allow publishing of any extracts from longer works but only complete short stories, poems and non-fiction texts.

Since the editors included in the anthology no full-length novels or autobiographies or plays, but only extracts, there seems to have been an irreconcilable clash between the editorial principles and the trust's policies. O'Sullivan, on the other hand, seems to have disliked what he called the ''narrow and prescriptive'' grouping of the selections under themes chosen by the editors.

Again there seemed to be a disagreement about a central principle of arrangement, for while the anthology is divided on historical grounds into 11 somewhat overlapping periods (given suggestive titles), ranging from ''Contact'' (1769-1835) to ''How to Live Elsewhere'' (2000-2011), the sub-sections are organised by theme and given descriptive or allusive titles such as ''A Dying Race?'' or ''Memory and Desire''.

Whatever the reasons for their absence, the anthology is the poorer for the lack of texts by Frame, O'Sullivan and Duff. Otherwise the selection of authors is reasonably inclusive and admirably balanced. Of the 97 poets represented in the Oxford Anthology of New Zealand Poetry (of which Williams was a co-editor) , 73 are represented here. In addition there are about 25 poets included that were not in the Oxford - mostly ones who have published mainly since 1990, plus a few very early ones. Of the 45 short-story writers represented in O'Sullivan's 1992 The Oxford Book of New Zealand Short Stories, 31 are represented here, while Stafford and Williams have included 10 writers not included in the Oxford. Some significant names are missing, such as poets W. H. Oliver and Michael Jackson, or short-story writers Roderick Finlayson and Charlotte Grimshaw, but as a collection of New Zealand poems and short stories the anthology touches most of the bases.

The coverage of non-fiction is more sketchy: of the 28 authors included in Alex Calder's 1993 anthology, The Writing of New Zealand: Inventions and Identities, only nine are represented in the new anthology. However, the borders of literary non-fiction are relatively undefined, and Stafford and Williams have selected several texts not previously anthologised, even drawing on letters to newspapers or ''Worser'' Heberley's previously unpublished Reminscences.

There seems to have been no attempt to represent all the most significant non-fiction writers, but rather to select material that will supplement fiction and poetry in presenting themes. Nevertheless, some of their most striking texts are extracts from non-fictional works such as Archibald Baxter's We Will Not Cease or Geoff Park's Ngai Uruora - The Groves of Life.

Drama has been treated similarly, with only a few playwrights represented, but with extracts chosen that fit neatly into thematic sub-sections, such as the titular speech from Greg McGee's Foreskin's Lament slotted into the ironically titled ''National Anthems'' sub-section (the speech's climactic ''Whaddarya'' provides the title for the entire 1980s section) or a scene from Jacob Rajan's Krishnan's Dairy slotted into an ethnically and culturally mixed group of 1990s texts dealing with ''Love''.

Aside from the big hole left by the absence of Frame, novelists are well-represented. The 45 extracts selected, drawn from 44 different novels by 38 different writers, represent the majority of significant New Zealand novelists, with no evident bias as to gender, ethnicity or mode. The selection is heavily weighted towards the past 50 years, but that is because the number of New Zealand novels published has grown greatly during those years.

Nevertheless, the extracts from an impressive range of novels are a strong feature of the anthology, not least because of the artful selection and arrangement that fits them in appropriate thematic sub-sections next to related poems, short stories, and extracts from plays and non-fictional texts.

That deployment of all the texts in thematic sub-sections is the most interesting aspect of the anthology. There is some loss in not arranging them by author - for example, the seven different stories by Frank Sargeson appear in five different sections, and it is only by using the index that the reader can link them.

Likewise, since there is no arrangement by genre, any reader would have a difficult time trying to piece together the narrative of, say, the development of the New Zealand novel. But the demands of chronology are at least minimally met by the large historical sections, and the grouping of works in thematic sub-sections within them encourages the reader to make connections among the texts from different authors and genres treating the same theme in the same historical period.

From the first sub-section,''The Uncultured Shore'', the editors' artfulness is evident in their grouping of the aged Te Horeta's 1852 account of his childhood memories of Captain Cook's 1769 visit with extracts from Cook's log concerning the visit and with an extract from John Savage's 1807 Some Account of New Zealand giving his impression of the Maori.

The artful mixing of texts from different genres is evident in the later sub-sections such as ''At the Beach'' in the ''Between the Wars'' section, where Katherine Mansfield's long story At the Bay is paired with Robin Hyde's seven-poem lyric sequence The Beaches, followed by Eileen Duggan's brief lyric The Tides Run Up the Wairau and Len Lye's short prose poem Dazing Daylight.

Extracts from novels can be fit effectively with poetry, as in the ''Imagining the Other'' sub-section of the ''From Kiwi Culture to Counter-Culture'' section, when the first three chapters of Part One of Noel Hilliard's Maori Girl are juxtaposed with James K. Baxter's The Maori Jesus, an extract from the Arahura whitebaiting sequence involving Arty Nicholson and Joe Taira in Bill Pearson's Coal Flat and Rod Derrett's wonderfully politically incorrect lyrics to his song, Puha and Pakeha - all from the first half of the 1960s. The anthology is filled with suggestions to make such fascinating connections of texts which, in the editors' terms, ''converse with each other''.

Sturdily bound and nicely printed, made up of well-chosen imaginatively arranged texts covering something approaching the full range of New Zealand literature, accompanied by brief, suggestive introductions to the whole and to each historical section (but without any intrusive notes), good bibliographies, and brief biographical outlines, the book will be good for browsing, will be a useful reference work, will encourage the making of many interesting literary connections, will serve as a useful (but not complete) guide to further reading, and, inevitably, will be a spur to good literary arguments as to inclusions and exclusions. For the right readers, the $75 might be money well spent.