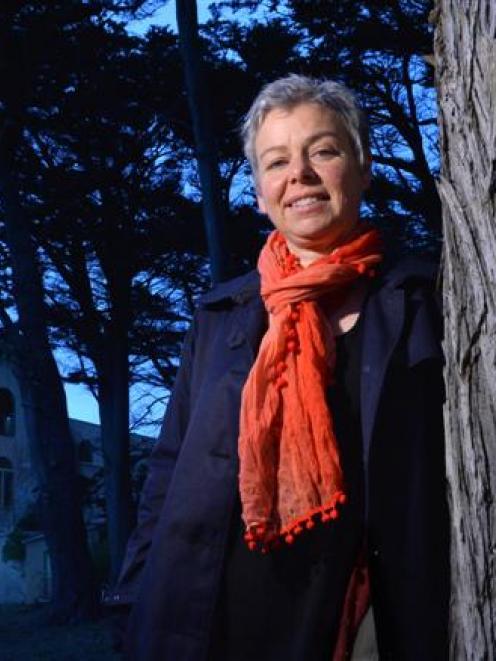 A castle is the backdrop for Rachel Stedman's first novel, A Necklace of Souls. Photo by Gerard O'Brien.
A prizewinning novel has kicked down some doors for its first-time author. Which is also a theme of the story, Kim Dungey reports.

Ask award-winning Dunedin writer Rachel Stedman about the most challenging aspect of her craft and she answers without hesitation.

By day, the former physiotherapist handles tender negotiations and contracts for the Ministry of Health. Outside of work, she is mother to two busy sons. The main problem is finding time.

Working on her first book, A Necklace of Souls, was a case of scrawling notes on scraps of paper, taking out her tablet on regular flights to Wellington, and sitting down at the computer in her spare bedroom at nights and weekends.

The dream that inspired the fantasy came to her five years ago so writing it was not a money-making venture, she says, laughing. But winning the Storylines Tessa Duder Award for young adult fiction was life-changing because it meant the book was published and the chances of that happening today are ''almost infinitesimal''.

The dream she had was of a girl fighting, martial arts-style, in a forest. Dappled light turned the surroundings dusty grey and her opponents were clad in black. When she woke, Stedman started thinking about why the girl would be there and how teenagers often feel they have to do things that society or their parents expect them to do, even if they would rather not.

''There's always that conflict between duty and freedom and I really liked that tension because it's quite fundamental to those years.''

The book's main character, Princess Dana, wishes she had been born a boy so she could wear hose, ride horses and have adventures. At 13, she sneaks out of the grounds of the family's castle and comes into contact with the Guardian, who protects her kingdom with the help of a magical necklace. Evil forces are also seeking the necklace and the young girl, helped by her companion, Will, must claim it and save her people.

The fight scene in the forest is at the end of the novel and the entire book the back story to it.

Although nothing like the rebellious Dana as a teenager, Stedman identifies with not wanting to do something and being told you have to, particularly because you are a girl.

When she was growing up, clothes were more expensive than they are today and many women made their own, she says.

''So I spent what seemed like hours trying to sew or standing on the top of a table while my mother poked pins into me when she was getting skirt hems right ... I often put sewing into my stories because I was so bad at it and hated it so much.''

Now, girls are not told they can't do things because they are girls but they do ''get role-modelled'', she says, describing how she recently flicked through the television sports channels and saw not even one female athlete.

Few boys sew but it is often men who are the top designers. In healthcare, the majority of the workforce is female but the top managers are mostly men. In toys, construction and action is strongly marketed as being for boys while crafts, role-playing and nurturing are marketed as for girls.

''I do think there are societal pressures that are so subtle we don't often stand back and look at them.''

''What I wanted to do with Necklace was to have protagonists of both sexes who interacted at an equal level; who were both equally developed characters.''

''Personally, I've found it quite hard to find fiction that treats male and female characters equally. In this, I don't mean to give them the same opportunities or equal rights or anything - but just to get inside their heads and to have them interacting with the world in the same consistent manner ... ''

'' I think literature - and by extension, movies and gaming - have quite a powerful role to play in developing gender equality. And I'm not sure we've got the balance right.''

As she wrote the book, Stedman drew on personal experiences - from the summer she spent doing archery as a child to the kickboxing she did when other young mothers were learning ''tennis and scrapbooking''. She also spent several hours watching YouTube videos of Kali knife fighting.

She hopes the novel will be the first in a trilogy and has completed the first draft of a sequel, this time set outside Europe.

Since moving to Dunedin from Christchurch with her scientist husband five years ago, Stedman has studied creative writing with poet and novelist Diane Brown, been shortlisted for the Storylines Tom Fitzgibbon Award and published short stories in School Journals and Semaphore Magazine: ''I don't think I would have done as well if I hadn't been in Dunedin because it's a very supportive community ... and it's not hard to come into contact with other writers.''

Like many of the best authors, she has also had her share of rejection. A science fiction story she wrote 10 years ago was turned down by an agent and a thriller was cast aside when an author's critique said she had not really thought about the characters: ''I think every writer's got at least two [manuscripts] stuck in a back drawer somewhere.''

Even her most recent success came in a roundabout fashion. An initial email said she had not been successful. Then, organisers told her that message was sent by mistake and she was still in the running.

Returning to university to do an MBA was pivotal to gaining the courage to submit her writing.

Storylines is to be applauded for supporting children's literature, says the 46-year-old, who grew up in a house without television and who was always a voracious reader.

''I love the way they're all about promoting reading for children because I think children learning to read is just so fundamental to how they'll cope in the world ... Kids now are all into computer games and YouTube and video stimulation. It's not about the written word. But that's what they need.''

The book
A Necklace of Souls, by Rachel Stedman, is published by HarperCollins.