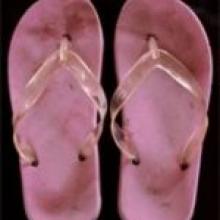 NICE PRETTY THINGS And Others <br> Rachel Bush<br>Victoria University Press
Rachel Bush is almost 70 years old. Her debut collection of poems The Hungry Woman (VUP, 1997) was shiny, sharp and satisfying. Her follow-up The Unfortunate Singer (VUP, 2002) was beautiful and heartfelt. Nice Pretty Things and Others is a continuation of the rich, surprising and bracing poems Bush is able to produce.

Bush's stirring poems explode unexpectedly. At times she confronts the reader head-on with her verse. There seems to be a sense of loneliness in some of her poems - but there is more than flashes of emotional depth.

Take the stand-out gem "Tyler, Lily and Mozart". It begins:

These people (too small, too young) have no
spare breath to cry. Incubators mute
sounds. There's electronic anxiety,
you hear its bells and beeping. Also
a taut mother who tells a midwife
she's scared something is wrong with his face
and why won't the doctors say, are they
hiding something? ...

Bush's thoughts don't stay in the hospital, they also head into houses, clothing and into schools. She even wonders what it may be like one day to live in a rest-home in "Think of you":

Think of you Dorothy (big as a year)
Think of your legs (sore as an empty cup but filled with
sorrow)
Think of your stories (your mother sewing, the wooden
trucks
your father made the boys)
Think of your cough (thick with time and disorder)
Think of your want of new clothes, a new pair of bras
Think of the licorice allsorts you hid under the tray of
your
walking frame
Think of your gait and the unease and stiff angle, the
bent
flower of your walk, Dorothy.

This is a tour de force that zooms in on human details. It would be wonderful if Nice Pretty Things earned Bush a few new fans. If you like your poems biting, passionate, stunning and magical, this is the one for you. There is a chilliness that grabs the reader's attention. 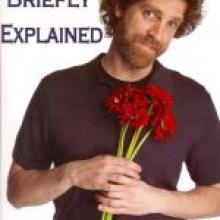 MEN BRIEFLY EXPLAINED<br> Tim Jones <br>Interactive Press
• Just like Bush, Tim Jones is releasing his third collection of poems, Men Briefly Explained. Boat People (Headworx, 2002) had tough, emotional content. All Blacks' Kitchen Gardens (Headworx, 2007) had some beautiful poems about love, sex and children. Jones came to New Zealand as a toddler from England and grew up in Gore. His dad was a fisheries inspector in Bluff. This latest collection finds Jones growing into a man. As a son, brother, friend, lover, husband and father these poems explore familiar sensations but combine a wry juxtaposition of good fortune with a bit of a bleak outlook. There are plenty of poems which are quietly devastating and really intimate. I liked his coming of age "happened to meet":

Jones produces a few prose poems like "As you know, Bob" and "Three Southern Prose Poems".

Do not be fooled by the funny-looking cover.

These poems are strangely compelling and slightly unnerving. A boy feels his feet getting cold and dodges rain, about to attend Otago University. Jones explores relationships with teams of people. Men Briefly Explained is a topic which seems close to Jones' heart. He blogs about it often. He has a keen eye. This slim book is his best yet.

Jones extracts ache from irony easily. Some of these poems might be anchored in melancholy that some readers might find distracting, but there is prettiness to the sadness that stops you jumping out of the window. Men Briefly Explained is rich stuff. 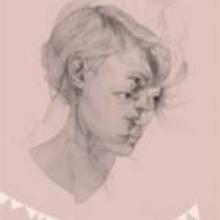 THE SAME AS YES<br> Joan Fleming<br> Victoria University Press
• Joan Fleming is a young woman who lives and works between Wellington and Golden Bay.

She has attended the Bill Manhire Writing School. The Same As Yes is her debut collection.

She puts together a series of prose poems. Her poems mean more than what is mentioned.

The candle tries to lick the ceiling. The
bedside table
wonders where it put its shoes. The rug says lie
down, the
walls say stand up straighter, the curtains say
hide. Knives
and forks carry on their ancient argument
inside the
cutlery drawer, while the hand asks the
chopsticks to just
make things easier, for once in your life. We
are never, quite,
what we want to be, or quite where we want to
be it. The
pocket dictionary says all the words it can
think of, and it's
still not enough.

Fleming knows how to be appealing and vulnerable in her work. It is hard not to get swept up in the fun. A man talks to the saddest bride in the world, a dancer with eyes on the palms of her hands talks to the floorboards and in a poem about growing old, an old man talks to the radio in his sleep. The Same As Yes is vibrant, a quiet joy. Gritty poems are delivered with a sweet authenticity.

For Fleming, nothing is out of reach in her poems. Inanimate objects have thoughts and feelings. There are lots of playful surprises to be found. The weight of the world is fabulous through the words of Fleming.

These pared down poems from a new talent are eloquent. The Same As Yes is mission accomplished. 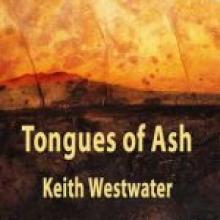 TONGUES OF ASH <br>Keith Westwater<br>Interactive Press
• Keith Westwater is a friend of Tim Jones. He lives in Lower Hutt and has been writing poems since 2003.

Westwater has been around for quite a few years and these poems Tongues of Ash have been bubbling up inside him for a while. An annotated map of New Zealand, with Wellington as a special inset, is set up as a guide to these poems.

Westwater's poems roam around New Zealand and hit on themes of romance, family, love, weather and landscape. The centre of this little book explores his army days at Waiouru and presents his strongest poems.

"Navigation point on the Desert Road for Greg Hill":

... We're halfway through
Greg said in his quiet way
pointing out the trees.
During Vietnam, Uncle Sam
licked Greg with orange rain.
Later, his life was cut in two.
He showed us how to get to
further yet, helped us with the pain
of that, made sure we all got home.

Westwater does not quite have the light touches of Bush, Jones and Fleming, but he refuses to be boring. Statues talk to each other in a small town and a field trip is not always a place of learning.

Westwater admits in "Canterbury Visit, Winter 1982" "I have to fumble my way". At times things seem a little clumsy, but there is still something good about Tongues of Ash. Westwater writes poems that make you want to believe the guy will eventually get his stuff together. I am looking forward to his next shot.