For some New Zealand soldiers love conquered all in wartime Italy 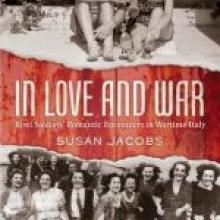 IN LOVE AND WAR<br><b>Susan Jacobs</b><br><i>Penguin Books</i>
Susan Jacobs has plumbed deeply indeed in writing of New Zealand soldiers' romances in Italy in the latter stages of World War 2. It is a book both of triumph and thwarted passion; about temporary romances and those which blossomed into marriage.

More than 16,000 Kiwi servicemen were deployed to fight the Germans and their Italian Facist allies in the Italian Campaign.

More than a million Italian civilians were killed or wounded in vicious bombardments; countless towns and villages were destroyed.

Women in Italy were living on the front line, a constantly shifting space.

Struggling to look after their families, they bore the brunt of the devastation, the author writes.

For more than two years New Zealanders lived in close proximity with Italians. They also drank, traded, bartered, worked, danced, courted and made love with Italians, and they married them.

They learned their language, empathised with their suffering, lived and in some cases, died, alongside them.

New Zealanders did have remarkable independence in Italy, Jacobs writes. In the latter stages of the war they requisitioned their own leave passes, appropriated trucks and took off to visit girls in other cities.

The Italian women who met and married New Zealanders were as diverse in family background, education and personality as their prospective husbands.

Some women remained unsure about their decision but were encouraged to marry by their families. Others rebelled against their parents' disapproval.

The first part of In Love and War examines the common preoccupations and experiences most soldiers shared.

Also discussed is the New Zealand military's response to what the author describes as "two vexatious issues" that arose out of the Italian Campaign: venereal disease levels and marriage applications.

In the second section of the book, both New Zealand husbands and their Italian wives, more than 60 years later, tell of their wartime and peacetime experiences. Their recollections make for riveting reading. The author has done them proud. Truly, as the Latin phrase has it: Amor vincit omnia - love conquers all. The many photographs of spouses are a bonus.

• Clarke Isaacs is a former chief of staff of the ODT.