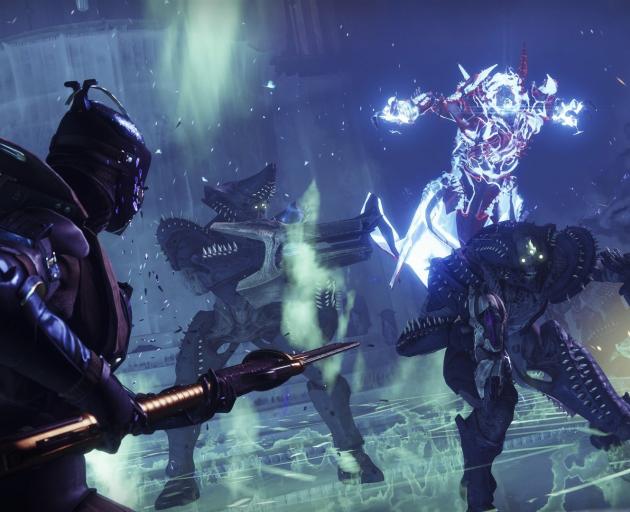 The Hive have learned some nasty new tricks in Destiny 2: The Witch Queen. IMAGE: SUPPLIED
DESTINY 2: THE WITCH QUEEN

Four-and-a-half years after its release, Destiny 2 just seems to keep powering on, with any signs of a Destiny 3 out of sight over the horizon. Accordingly, its major expansions have come to feel almost like new game launches themselves. Enter latest big addition The Witch Queen, which after much anticipation landed in late February with new locations, new activities, new bad guys to fight and perhaps juiciest of all, the culmination of a narrative with threads that go back literally years. And great news: the hype was mostly justified.

What if you're a new or lapsed player and don't know your Rasputins from your Rahools? It's silly to pretend that people new to or not up to date with Destiny 2's story — which stretches across dozens of factions and back billions of in-game years at this point — will not be a little confused at all the proper nouns and references thrown their way up front in The Witch Queen. But mostly, this is all you need to know: Savathun, the eponymous occultist regent of the title and an ancient alien enemy of humanity, has somehow nicked the magical power bestowed on Guardians (the players), which is known as the Light. The Light gives Guardians their supernatural abilities and has been key to a defence of humankind that brought us back from the brink of extinction, but now Savathun’s got it and is turning it against us — sacrilege! It's up to players to travel to her throne world, conduct an investigation into how she got hold of the Light — mostly by shooting things — and put a stop to her evil schemes.

Players of The Witch Queen will thus be spending a lot of time in Savathun's Throne World, which is half swampy wilderness and half sprawling bone-white alien citadel. Bungie have made a name for themselves with their spectacular sci-fi environments and here they're absolutely at the top of their game. From ominous lost temples deep in caverns to spiky, striking edifices towering over the landscape, each new location you’ll fight through in the expansion's campaign seems to one-up the one before it in terms of spectacle.

While familiar Destiny enemies make up most of the opposition in the midst of all this panoramic splendour, Savathun's nabbing of the Light means they have a couple of new tricks up their chitinous sleeves. Most notably, baddies the Hive have added Guardians of their own to their ranks. These have a nasty habit of turning the sort of magic powers Destiny players have been deploying against hapless foes for years back your way, and an even nastier habit of (also like player Guardians) coming back to life with full health when killed, unless you approach and deliver a coup de grace fast enough. On higher difficulties, they can make for a seriously tough fight — a different play experience than many of the game's previous bosses.

With its amazing locations, lengthy missions and dramatic reveals — including a heck of a ‘‘to be continued’’ ending — the story campaign is a huge highlight of The Witch Queen, but you’ll knock it off in perhaps 10 hours or so, so will be casting around for more things to do. Fortunately, there’s plenty. Simply running around the expansion’s new areas offers Destiny’s familiar trove of secrets to discover, puzzles to solve and ‘‘lost sector’’ mini missions to battle through, while new six-player activity The Wellspring offers a couple of different versions of an intense battle. There’s also further weekly ‘‘memory’’ missions to add to your playlist, two new strikes, and exotic weapons to chase via specific activities, and virtually all of the above has an enhanced difficulty version for when you’re getting too big for your space boots (including the campaign missions, which are fun to tackle all over again).

The expansion’s premium endgame content, its six-player raid, has also now launched and offers another Bungie masterclass in imaginative gigantic spaces and fiendish puzzles that require intensely co-operative gameplay. It’s the game at its best and its memorable, boot-heavy boss has already spawned a thousand memes. Goodness me, there’s a lot to do — and that’s even if you opt out of ponying up for the game’s ongoing seasonal content, which offers yet more activities, weapons, and tied-in story content.

Any quibbles? Well, the concept of crafting weapons, which also arrives with the expansion, is a welcome addition to the franchise, but the implementation feels like it’s not quite right. Before you can make anything, you need to uncover its pattern — an often protracted process that relies on random loot drops going your way — and then the resource cost of even altering a crafted weapon is high, which discourages experimentation. (New weapon class the glaive is fun though, consisting as it does of great big pokey polearms that also have a gun in the end of them, because why not?)

Long time players may also be a mite disappointed at the relatively minor changes in the game’s other core areas, with still no sign of new maps for either the PvP Crucible (although some retired ones have reappeared) or competitive PvE Gambit mode, the latter of which is starting to feel especially like a bit of an evolutionary dead end. But in better game-refreshing news, there’s a vastly expanded suite of powers in the new-look void subclass, which is the first of the game’s power trees to get a major overhaul, with more scheduled down the line.

At this point, many gamers will probably have a good idea whether Destiny is for them or not, but it’s fair to say with The Witch Queen, the game is in the best shape it’s ever been. If you’ve been on the fence or drifted away from the game, it’s a great time to jump in.