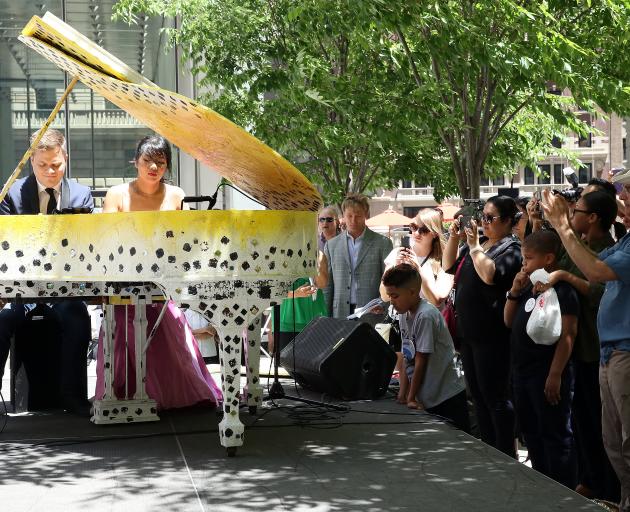 A full house at the Glenroy Auditorium was blown away by the sheer virtuosity and rapturous engagement with the music exhibited by pianists Greg Anderson and Elizabeth Joy Roe.

A vibrant programme showcased their performance virtuosity and their talent as arrangers of mainly popular 20th century works. Their lithe presentation and relaxed stage manner sealed the audience's approval.

They opened the evening with their arrangement of Mozart's Cosi Fan Tutte. Although superbly played and despite being given an upbeat introduction, this was the least engaging of the works and the most out of keeping with the rest of the programme. What followed was outstanding.

Stravinsky's "Adoration of the Earth" from The Rite of Spring was as powerfully visceral and sensual as the orchestral version. With the exception of the opening bars which do not translate well, the chords, clumped discords and high trills were thrilling.

Their variations on Leonard Cohen's Hallelujah were sensationally wrought. It starts naively and culminates in a rousing hymn.

However, promised allusions to Beethoven's late quartets or Schubert's sonority were not fully realised.

Schoenfeld's fiendishly difficult "Boogie" from Five Days from the Life of a Manic Depressive was amazing for its mad-cap speed.

Their magical performance of Piazzolla's tangos Oblivion, Primavera Portena and Libertango exemplified the dances' captivating risk. Their dampening and plucking the piano strings captured elements of the guitar. Stamping feet and rapping the piano's wood exemplified the works' spirit.

A change of pace was provided by an alluringly sweet arrangement of Brahms' Lullaby.

Then the jaunty and challenging fantasy from West Side Story highlighted Bernstein's rapport with the pathos and violence of New York.

The standing ovation won the audience two encores after what was already an emotionally generous and physically demanding programme.