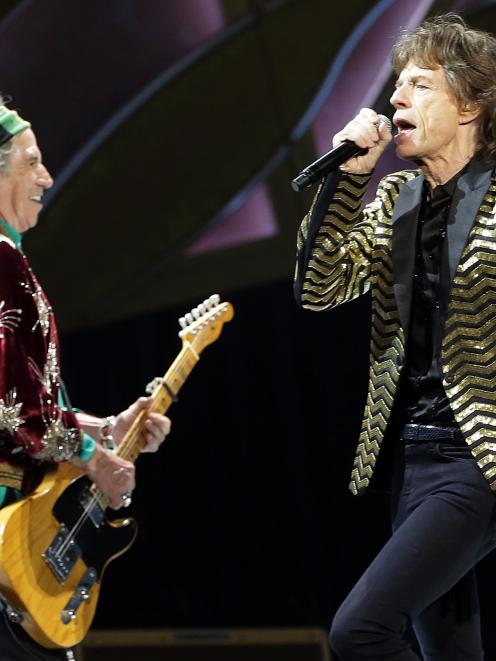 Mick Jagger and Keith Richards of The Rolling Stones perform in Sydney last week. Photo by Getty Images.
When the Stones roll into New Zealand a 300-strong army will mobilise to stage the greatest rock show on earth.

Mick Jagger and his band will rock 47,000 fans at Auckland's Mt Smart Stadium on Saturday.

It will be a case of second time lucky for the band's fans here, after their planned concert in April was canned after the death of Jagger's partner L'Wren Scott. The band is embroiled in a $16.3 million legal dispute with insurance underwriters over the costs of the cancelled Australasian tour.

And despite the Stones' ramshackle reputation, their 14 On Fire tour is being run like a military operation. It has already pulled in $130m in box office receipts and been attended by more than 600,000 people at 29 shows.

The Rolling Stones live juggernaut is so well-drilled it has been studied by the United States defence forces for ideas about improving efficiency.

"We've had the army and navy come in mufti to see how our guys put the stage up without an order being given," guitarist Keith Richards recently told Australian media.

"They are amazed how we run this. And to be honest, I can't tell them how it got to be this way.

"It is a big organisation, but everyone works at it. We improvise, adapt and overcome."

Fans of all ages will travel from every corner of the country to see the Rolling Stones belt out rock classics such as Satisfaction, Brown Sugar and Jumpin' Jack Flash.

Via the band's website, Kiwi gig-goers also get to vote for what favourite track they want to hear on the night. The Stones will oblige in Auckland by performing the song most requested by New Zealanders.

Now they are in their 60s and 70s, the band's wildest days are well behind them. Richards and guitarist Ronnie Wood will warm up for the Mt Smart show with a game of snooker backstage; Jagger, 71, insists he needs "lots of rehearsal, lots of sleep and lots of privacy".

Drummer Charlie Watts doesn't have a rider for his dressing room. He believes they are "silly" and he hates having people around him, except for his wife and daughter.

The band travels in style, though, with five-star accommodation and BMW or Mercedes limos that must be black with tinted windows.

The band will stay at the Langham Hotel in Auckland.

Kiwi fans feared the Mt Smart gig would be shelved for a second time when a recent concert at Hanging Rock, near Melbourne, was scrapped when Jagger contracted a throat infection.

But the Rolling Stones sprang back into action at Sydney's Allphones Arena on Wednesday, when Jagger showed no hangover from his voice problems.