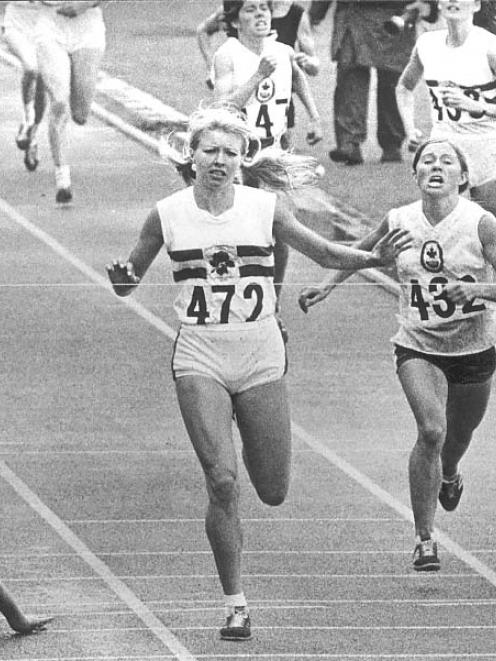 Sylvia Potts falls just short of the line in the 1500m final at the 1970 Commonwealth Games. Photo from ODT files.
Hayden Meikle counts down the 150 greatest moments in Otago sport.

Sylvia Potts (nee Oxenham) almost came away with golden glory at Edinburgh in 1970. But her gallant effort in the 1500m ended in tragedy.

The 10 women in the final stayed together most of the way as they jostled and elbowed each other for most of the race.

Going round the bottom bend for the last time Potts seized her chance, shot to the lead and headed for home.

The Commonwealth Games gold medal was in her grasp as she entered the front straight.

Her lead was slender but it was enough.

She had pushed herself to the limit and was desperately holding on to her lead in the last 10m.

But 2m from the line, tragedy struck.

There was no strength left in her thigh muscles and she could not pull her right leg through.

She staggered and fell, crashing to the ground from sheer exhaustion, as England's Rita Ridley took two more steps to win the gold medal.

Potts clambered to her feet and walked over the line in ninth place, in 4min 25.20sec.

The physical education graduate married her coach, Allan Potts, in 1965 and the husband-and-wife team coached thousands of young athletes in Otago and Hawkes Bay before she died from cancer at the age of 55 in 1999.

She was athletics team manager at the 1990 Commonwealth Games in Auckland, where her son Richard was a competitor, and she and Allan were awarded a joint ONZM for their outstanding contribution to track and field.