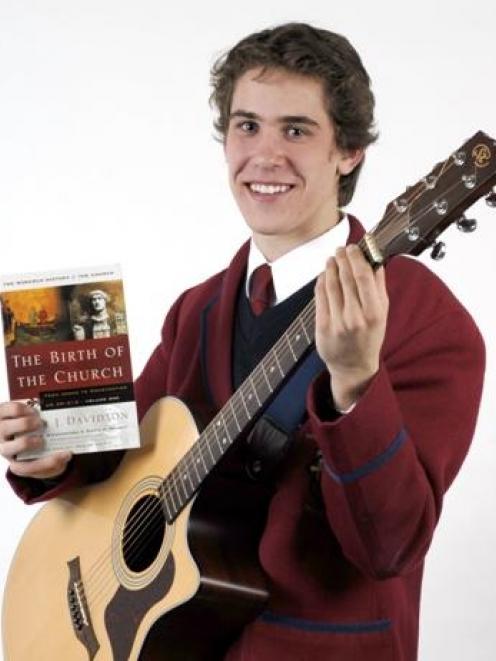 Jordan Redding
Although Kavanagh College tutor prefect Jordan Redding's life is never far from the "good book", it has not stopped him from transforming his choirboy voice into that of a "rocker".

"I used to do a lot of choral singing at primary school. But once I learnt to play guitar . . ."

Jordan (17) says the guitar changed his life and he has never looked back.

He has been a finalist in the Otago Smokefree Rockquest for the past three years and a lead in the school musical for the past two years.

He composes his own music and was recently commissioned by the Presbyterian Church of New Zealand Global Mission office to write and record a "light rock" song for a video highlighting child poverty.

"I like to compose my own music and perform it. It's a way for me to express myself, and writing songs helps me to work through complicated moral issues."

In the classroom, Jordan has worked above his year level in several subjects.

Last year he studied level 3 maths with calculus while gaining an excellence credit in NCEA level 2 and was first in level 2 classics.

This year he is studying early Christianity at the University of Otago and ultimately plans to become a theology lecturer.

He hopes his study will go hand in hand with a career as a professional musician.

Role model: Bono from U2.

Hopes for the future: To be a professional musician, open his own recording studio and become a theology lecturer.