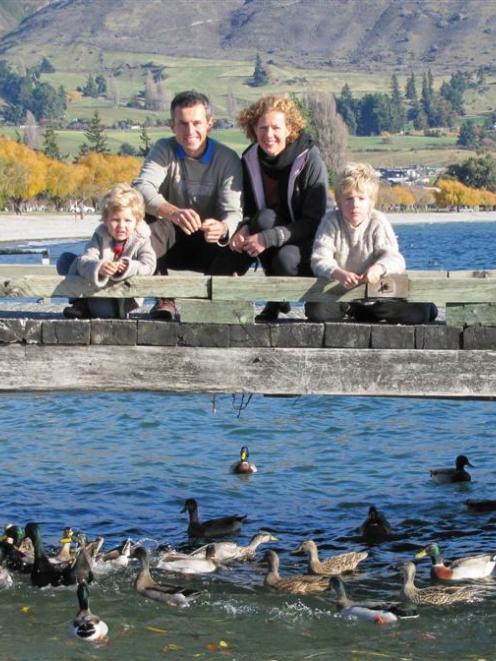 Feeding ducks on the Wanaka jetty are (from left) Joseph (3), Steve, Steph and Alexander (8) Combe. Photo by Marjorie Cook.
Sometimes you can feel you are living in a war zone. Wanaka couple Steph and Steve Combe know what that's like and how it feels when you let stress go. Marjorie Cook reports.


The Combe family is a normal, happy family enjoying Wanaka's lifestyle to the full.

Mum Steph (43) is a Pilates instructor, Dad Steve (39) is a helicopter pilot and they have two adored boys, Alexander (8) and Joseph (3).

They worship at Wanaka's New Life Church, relish sports and the great outdoors and enjoy the company of their friends.

It's just that there was a time when Mr Combe, a former British Royal Marine captain, thinks he was behaving like an "arse" and skating on thin ice with the woman he fell in love with 11 years ago.

"I think everybody underestimates the effect stress has on the psyche and the body ... I felt like I didn't deserve to feel the way I did or to seek treatment because there are always people worse off than you ... People feel you have a stiff upper lip or be staunch, which is very Southern Man," Mr Combe said. 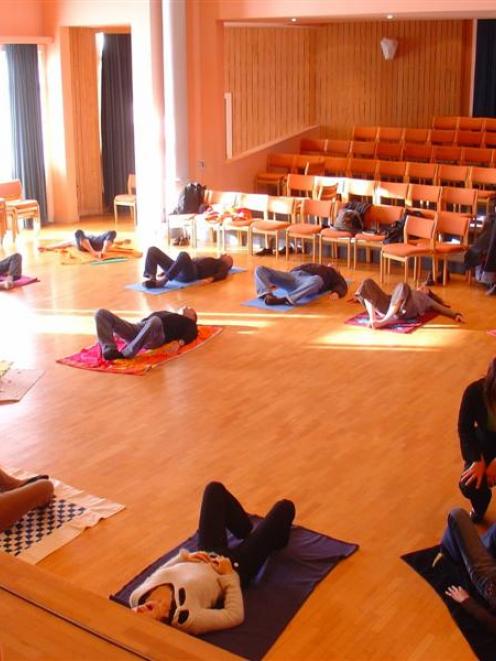 Participants in a TRE workshop. Photo supplied.
She did, when she was working as a senior executive for a management consulting firm doing corporate strategy work for BP.

She felt stressed when Alexander was born seven weeks prematurely and again when her husband went to Iraq in March 2003, leaving her at home with a five-month-old baby.

"Everyone tries to get on with life ... Alexander was picking up my stress. And I had to stop watching the news because it was too stressful. When Steve came home, it was like we should be all right now. But we didn't realise we were still in the flight-fright mode ... People get used to living in that environment and begin to accept it as normal," Mrs Combe said.

Mr Combe's three-month tour of duty in Iraq marked the end of his eight-year military career.

He wanted to leave before being sent to Basra but had no choice.

His unit was the first of the allied forces to enter Iraq, apart from special forces, and he is proud 847 Naval Air Squadron did not lose a single chopper.

"I entered Iraq in a small unarmed helicopter wearing a breast plate and kevlar helmet. It carried two people. We were doing observation. It was like going to war in a Robbie [Robinson R22]. It was hilarious," he said.

By September 2003, the couple had emigrated to New Zealand, where they'd never been but had heard was fantastic.

Mrs Combe began her Core Strength Pilates business and Mr Combe found work, first with Wanaka Helicopters and now with Over The Top in Queenstown.

Over the years, stress has raised its head from time to time and recently the couple began exploring a tension and trauma release process (called TRE), developed by international trauma and natural disasters recovery authority Dr David Berceli.

Dr Berceli has taught TRE, an exercise programme, around the world for 15 years to the US military and survivors of war and natural disaster such as the Australian floods and the Thailand tsunami.

Mrs Combe set up TRE New Zealand earlier this year and TRE Australia director and physiotherapist Richmond Heath is visiting this month for three workshops in Auckland, Christchurch and Queenstown.

Mr Combe has been her willing TRE guinea pig and says the exercises have relaxed his tight diaphragm and helped him feel more rested.

It was clever of his wife to tell him they were quite hard, he said.

"That was a challenge ... She knew how to put a carrot in front of me," he said.

The shaking triggers the central nervous system, rebooting the subconscious brain to deal with perceived threats.

Dr Berceli's research noted shaking is a physical fear response exhibited by animals and children but human adults may quash it for social reasons.

Stress can put the parasympathetic and immune systems under such pressure the body seems in a permanent flight-fright-freeze state.

What Mr Combe particularly likes about TRE is it's not being promoted as the next big exercise fad.

"It seems to me that no-one's ever grabbed this and thought 'Great, I could get rich from this' ... It just seems to me that it's a dollop of goodness and this guy's just thrown it out there and let it ripple around the world," Mr Combe said.

Mrs Combe likes it because it complements talking therapies.

"It's neurological, not psychological.

"So you don't have to tell your story. But it is still helpful to do the talk therapies or write a diary or paint or draw ... . "It fits with other modalities," she said.

Mr Combe addresses the "what happened at war" question with humour.

"It's the worst thing you could ask a child too - 'What did you do at school today?' 'Nothing'."

He was born in South Africa, raised in Britain, and obtained a technology degree at university in Plymouth.

He decided to work for Christian organisation Food For The Hungry in a Rwandan village during that country's civil war.

From the day he arrived mob justice ruled and people were being murdered in the streets.

Children were victims and gun battles raged at night.

He lived in a compound and white people were rarely targets, although a stray bullet could come in, he said.

One day he and a medical worker were briefly taken hostage by Zairean military police.

"We had to pay our way out. I kind of thought nothing of that because I had got used to it," he said.

When he returned to England, he found it really dull.

So he joined the British Royal Marines and served in a logistics role for eight years in places such as Sierra Leone, Kosovo and Basra.

Iraq was a war he morally disagreed with.

He'd signed up for military service because he supported the "good stuff" such as United Nations peacekeeping.

"But I also had a dark vengeance thing against the negative people I came across [in Rwanda]," he said.

"I felt I had to stick with it. It was too late to say "Hang on, I'll just jump off the ship."

His reconnaissance missions in Iraq were among the most dangerous and being shot at was like seeing fireworks without the fizz.

Mr Combe did not contract full-blown post traumatic stress disorder and does not suffer flashbacks but accepts he was "running around like a headless chicken" when he arrived in New Zealand just months after leaving the military and did not want to talk to his wife about his experiences.

The couple say you don't have to be shot at to feel stressed.

A flight-fright-freeze response can just as easily be triggered by natural disaster, divorce, a high-pressure job or financial issues.

"Natural disasters are as unpredictable as a war zone and have just as catastrophic consequences," Mr Combe said.

"Trauma seems like a big word but what it's referring to is the system in a state of high alert," Mrs Combe said.

Regular exercise, counselling and humour could all be integrated with TRE to achieve a calm state, they said.

"If everyone could calm down and be who they are meant to be, it would be amazing ... "If we are calmer, it ripples out to others.

"We have discovered the joy in our lives again," Mrs Combe said.

Tremors are an innate way of discharging tension through rapid muscle contraction and relaxation, which helps reduce general stress, anxiety, tension and pain, especially in the lower back and pelvis.

However, in most cultures tremors are seen as a sign of weakness and vulnerability and tend to be suppressed or avoided, resulting in chronic pain and tension in the core of the body.

Neurogenic tremors, or involuntary shaking, occur in severe shock or fright, or when extremely nervous or excited.

Every person has their own tremor pattern, just as they have their own individual heart rate and respiration in response to exercise.

After the TRE exercises are learned, they can be done regularly and added to existing exercise programmes. Once mastered, they can be reduced to a couple of times a week or whenever a stress situation arises.

Many people experience no emotional content during the exercises. For others, emotions can arise, either with or without associated thoughts or memories. As long as participants are comfortable with these emotions, they may simply allow them to arise and release in the same way they allow the tremors.

If the emotions are overwhelming or too uncomfortable, people can simply stop the process by laying their legs out flat or lying on their side. In such cases the exercises should be done with a health professional or support person.

TRE workshops are being held in Auckland from May 21-23; Christchurch on May 26; and Queenstown's St John's rooms at Frankton from May 28-30. A donation to the Christchurch Earthquake Appeal will be made from the proceeds of the workshops.