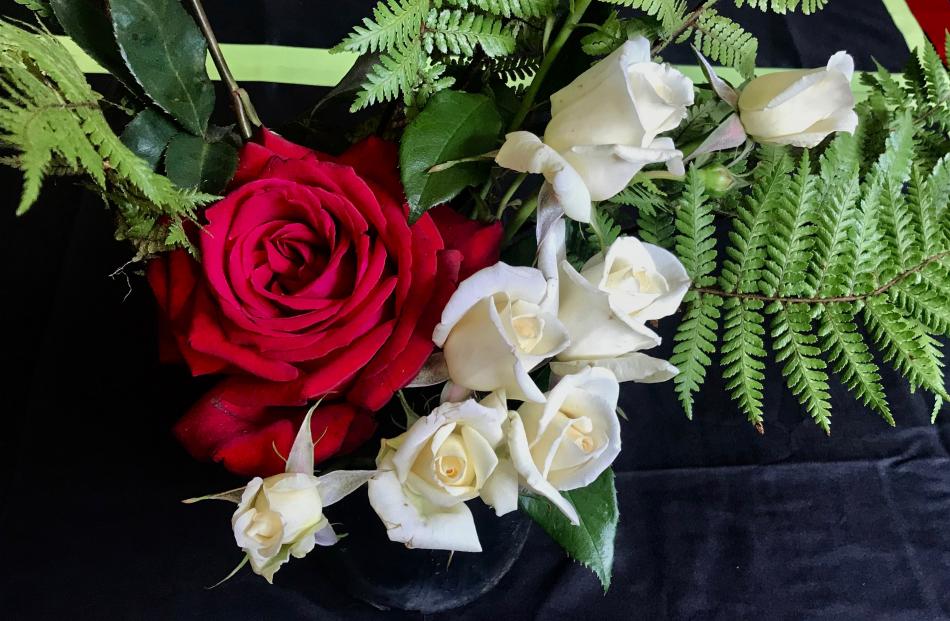 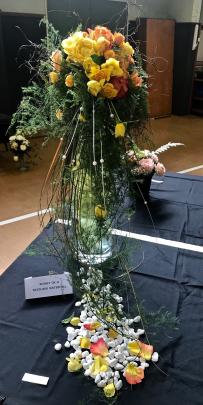 North Otagotook top honours in the floral art section with Sunset on a Westland Waterfall, created by Alison Ludemann. 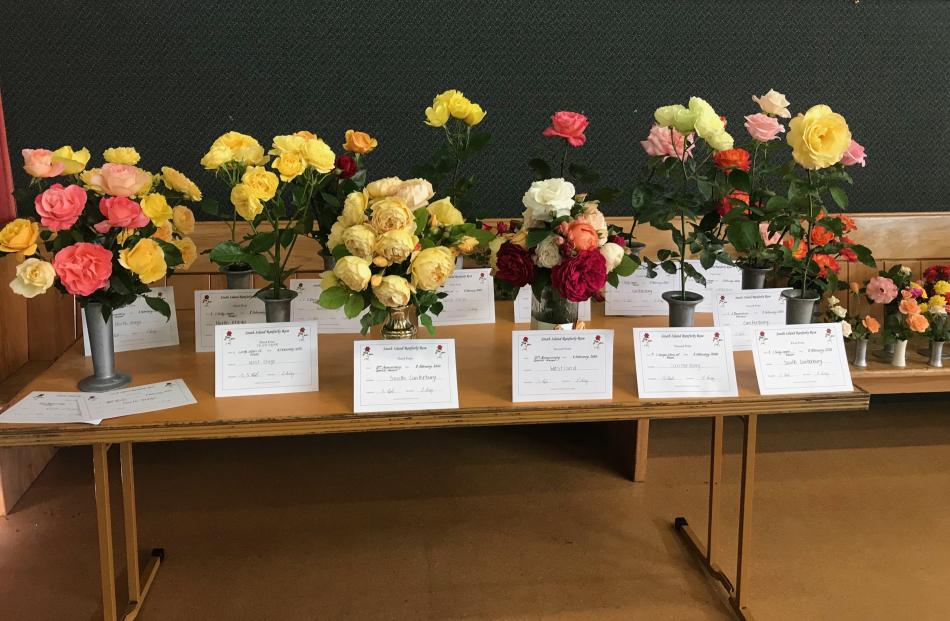 Section winners at the Greymouth show. 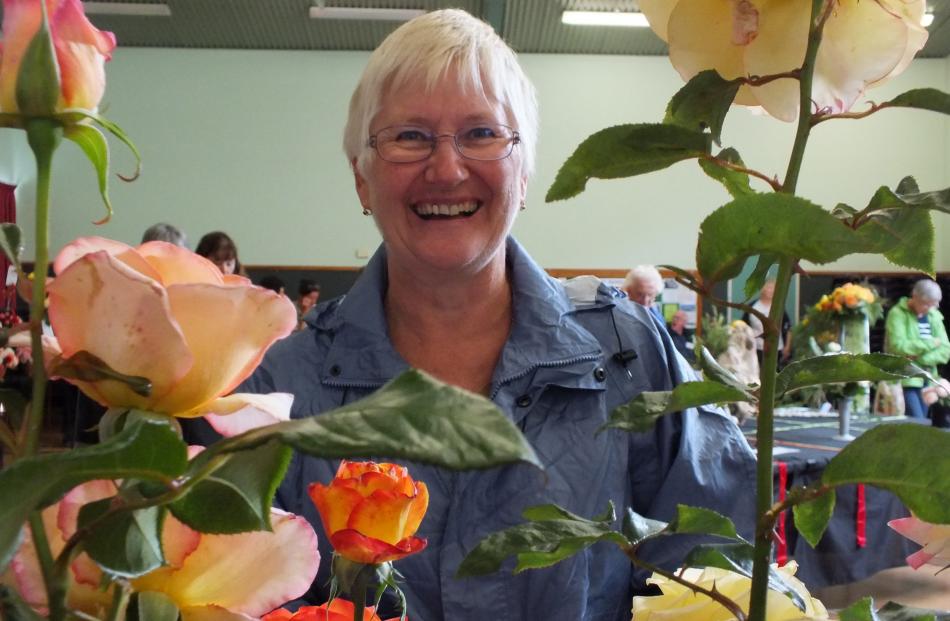 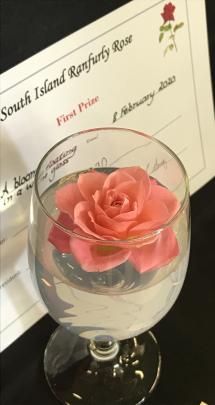 The Otago Rose Society won the section for a rose in a wine glass with this entry. 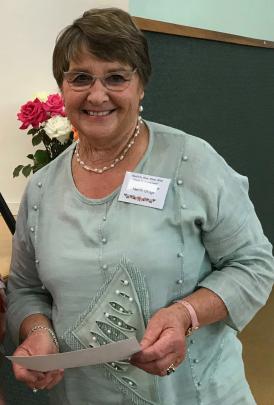 Representatives of all South Island rose clubs met in Greymouth earlier this month for a weekend that began on the Friday evening with whitebait patties and ended on Sunday morning with an informal gathering in the garden of Westland Rose Society president Stan Hyde and his wife, Margaret.

Between the socialising was the shield competition, with clubs from Nelson to Invercargill vying for the award. They brought their own roses, which survived in great condition — even the Southland flowers, which had endured a longer-than-expected car journey thanks to a six-hour hold-up at Five Rivers.

"We stopped on the way over Arthur’s Pass and picked some ferns from the roadside," she said. 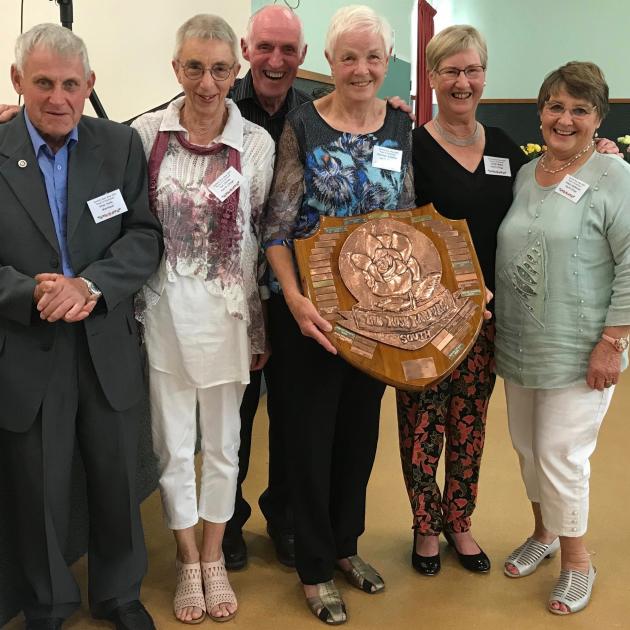 "Entries were down a bit this year because of the weather but it’s still a pretty good show," she said.

Judge Sheree Gare, of Waikato, praised the freshness of the blooms, which, with substance, can account for up to 60 points, while the overall appearance is worth up to 40.

"Sometimes it’s harder judging at this time of year because the quality isn’t generally as good as in the spring. These are second and third flushes and for us the first flush is ... the best, which is why we have great November shows," she said.

Nonetheless, she was pleased with what she saw in Greymouth.

"Have a look at this; it’s absolutely gorgeous," she said to her steward, Lyn Anisy, of the West Coast club.

"It" was a miniature rose in a wine glass and it won first prize for the Otago Rose Society, which also took several other awards.

Ms Gare described the floral art section winner as "amazing, just beautiful". Entitled Sunset on a Westland Waterfall, it was created by Alison Ludemann, of the North Otago Rose Society.

Together with the club’s other highly placed entries, the North Otago team garnered enough points to win the massive shield for the second year running.

The shield was instigated by the late Sam McGredy who, as well as being a world-renowned rose breeder, was an avid rugby fan. He felt the rugby competition could be replicated in the rose world, so donated shields for the annual North Island and South Island club competitions.

The first South Island competition, held in 1977, was won by Canterbury. Next year’s Rose Ranfurly will be hosted by the West Otago Rose Society and is scheduled to run in Tapanui over the last weekend of February 2021.