Anchored by the harbour 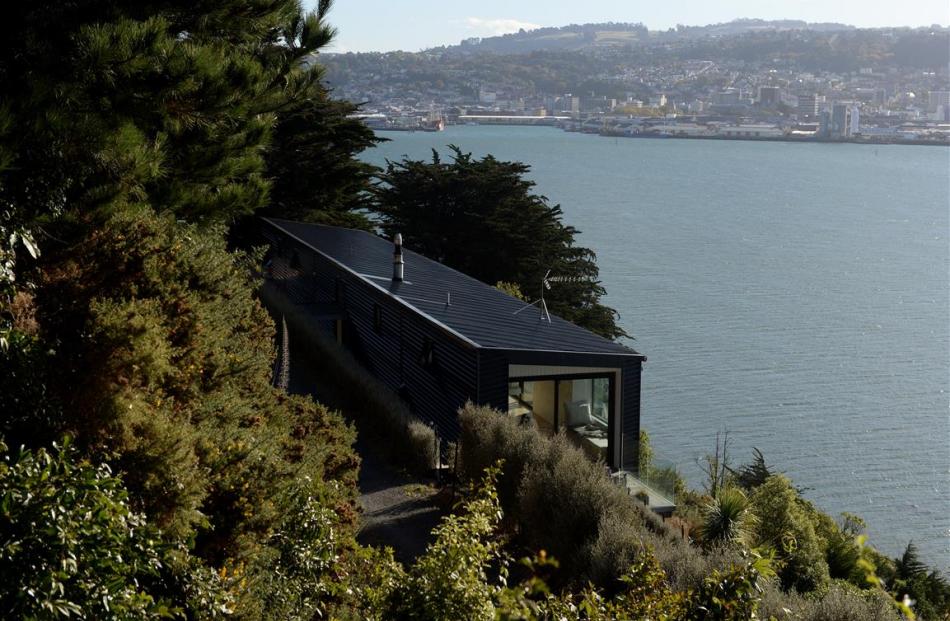 The long narrow shape of this house was dictated by the steep Otago Peninsula site, which drops away dramatically from the driveway. The black steel, a cost-effective material, gives an industrial feel to the exterior. Photos by Linda Robertson. 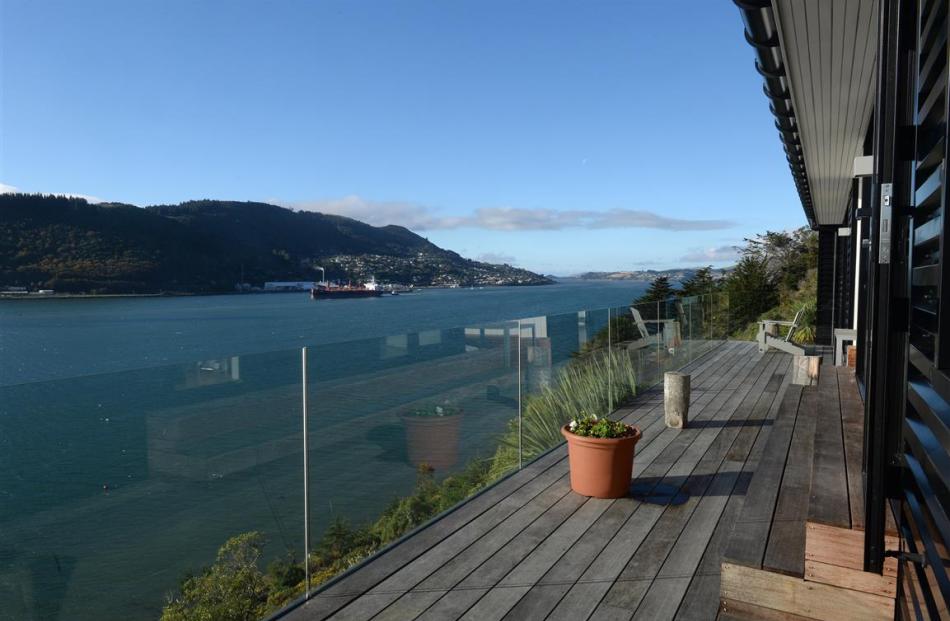 The front deck offers views to Taiaroa Head and there is almost always activity on the harbour. 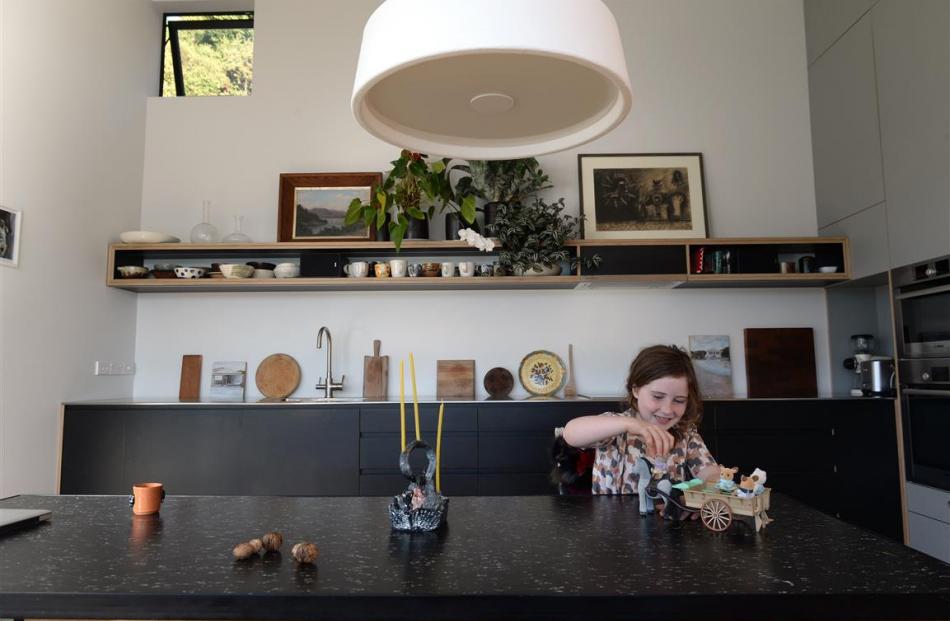 Frances (8) plays in the kitchen, where favourite ceramics are on display. 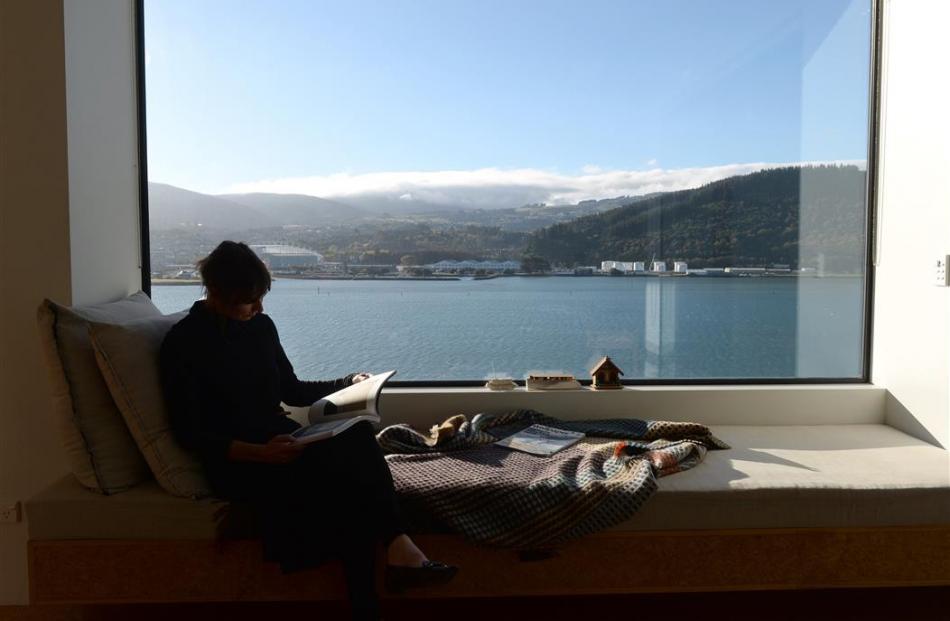 The family spend most of their time in the kitchen-dining area, where a window seat offers views across the harbour to Forsyth Barr Stadium. 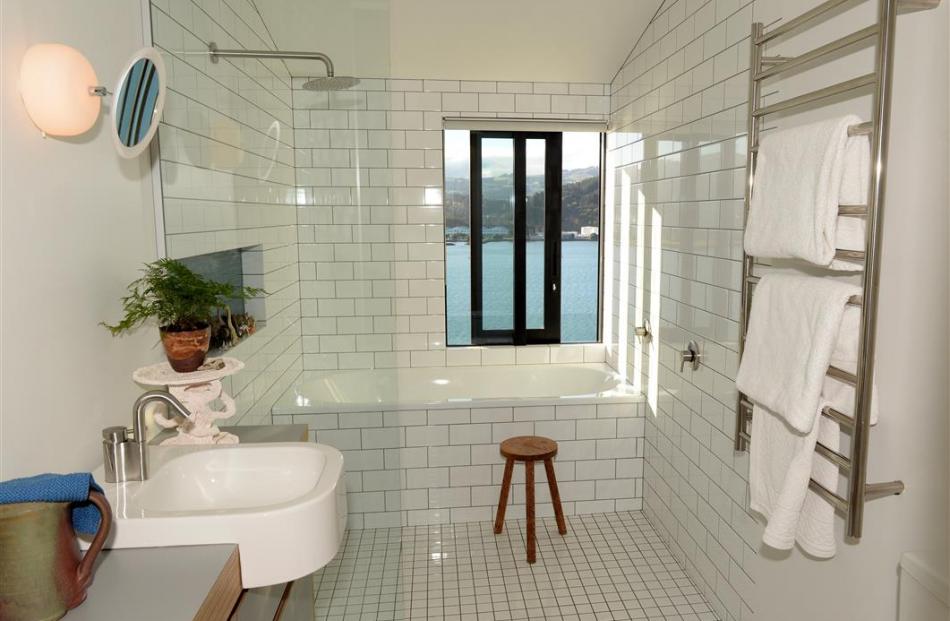 Being only one room wide, the house has water views from every area, including the bathroom. 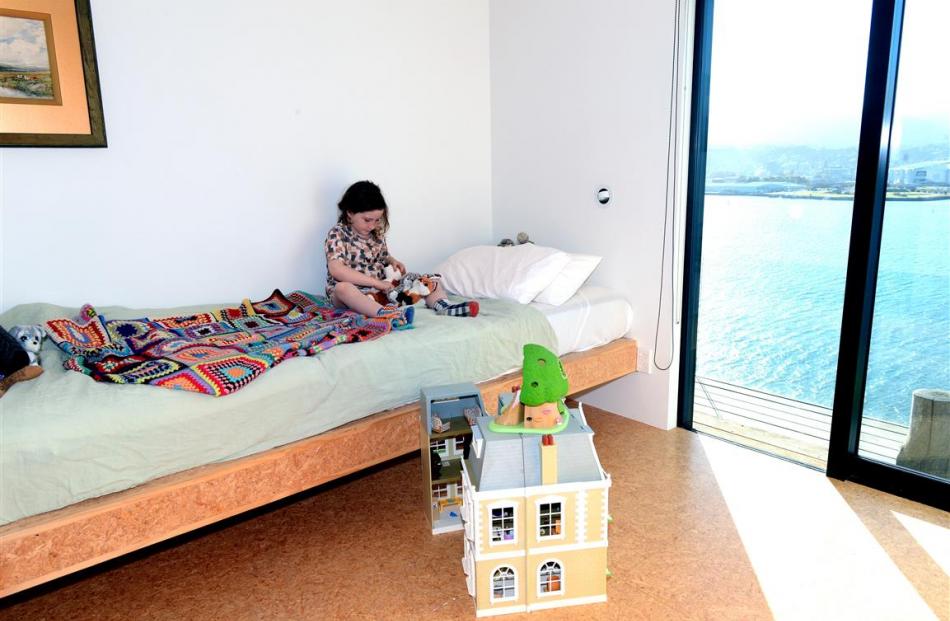 Frances plays on her extra-long bed, which allows her to have a friend stay over. Although the bedrooms are compact, the expansive views prevent the house from feeling small. 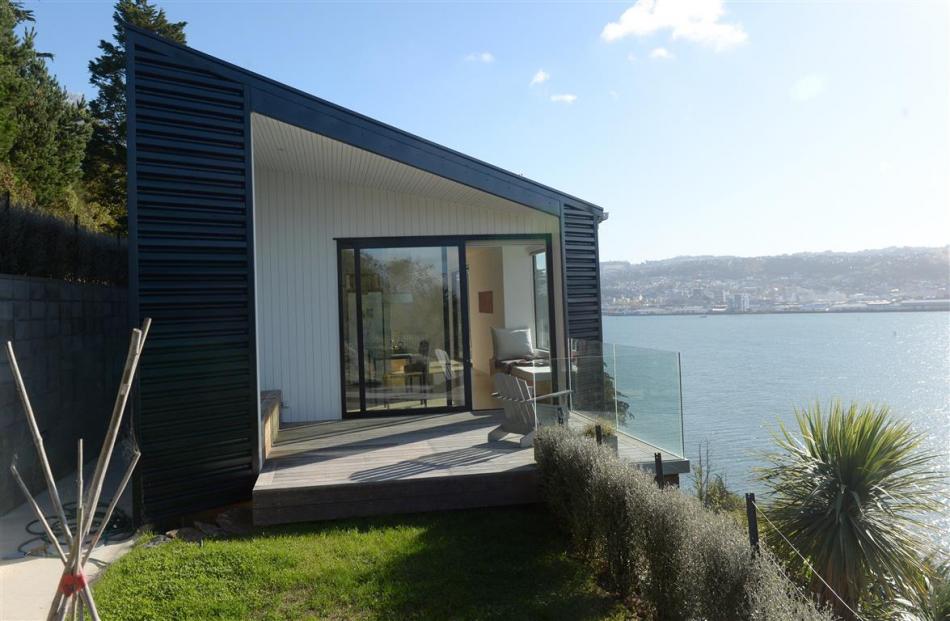 The sheltered seating area at the eastern end of the house leads to a small flat lawn and garden.

Others saw only a steep, overgrown site but a Dunedin couple saw potential and set about planning their dream home. Kim Dungey reports.

Many people building houses want all the bells and whistles: two living areas, an ensuite, an office and attached double garage. Not the owners of this Dunedin property.

When ceramic artist Amanda Shanley and financial advisor Rhodes Donald planned their Vauxhall home, they thought about what they could leave out rather than what they could add.

One reason was they didn't see the need for spaces such as a scullery or lots of spare rooms for occasional guests. Another was their limited budget. But above all, they wanted a building that was simple.

At a time when many new houses exceed 200sq m, theirs is just 150sq m (plus garage and decks) and only 5m wide, its linear form dictated by a steep narrow site offering sweeping views from the central city to the entrance of Otago Harbour.

The couple bought the north-facing section in 2005, but built only three years ago after buying and renovating the old railway signalmaster's cottage in Port Chalmers.

Donald says the overgrown section, previously a quarry, had been on the market for quite some time because no-one could picture it as a building site.

However, good-quality bedrock was found at "just the right depth'' and 24 rock anchors tether the house to the basalt, the foundations coming in under budget.

The design of the home was entrusted to Bronwen Kerr and Pete Ritchie, of Kerr Ritchie Architects, who Shanley says seemed to appreciate and enjoy building smaller houses: "You look at a lot of homes in magazines and a lot of architecture does seem to be completely out of reach ... They seemed approachable and they took our budget seriously ... '' 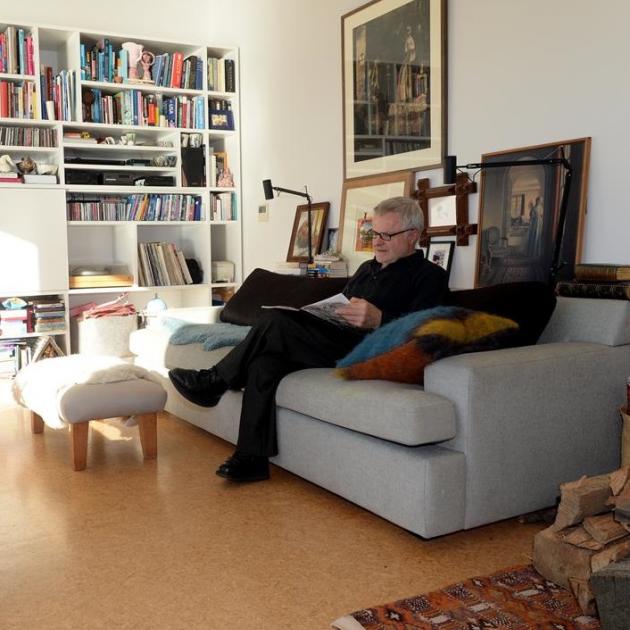 Rhodes Donald relaxes with a book in the living area. Photo: Linda Robertson

The Dunedin couple asked for a house spacious enough for them and their 8-year-old daughter Frances and to accommodate Donald's three adult sons when they visited from Auckland.

For Donald, it was important to be able to walk out on to the section from the house (something they can do from three points, including the front deck).

Pete Ritchie says the reason the house is only one-room deep is that the site falls away "incredibly quickly'' from the driveway: "It's probably one of the steepest sites we've ever worked on. So it seemed logical not to fight the contour, but to run with it.''

The east end of the house tapers to face towards the harbour with a sheltered deck recessed into the building envelope and a small flat lawn adjacent.

The exterior seating area is lined with white-painted timber that contrasts with black steel on the home's exterior, a look that Shanley had admired in the Fogo Island artists' studios designed by Canadian architect Todd Saunders.

Despite the steepness of the site, they didn't want a big concrete driveway or lots of excavation and retaining walls, she says: "That sort of alters the landscape. We wanted to touch it as little as possible.''

However, they did remove 40 tall pine, gum and macrocarpa trees, replanting with fruit trees and 350 natives chosen to attract birdlife.

In the process, they discovered several stone walls from a road built during the Depression.

Some had collapsed but others will become features of the landscaping.

Inside, the material palette was deliberately kept simple with white walls, particle board floors and doors, and dark kitchen and bathroom cabinetry made from plywood, overlaid with laminate.

To the west of the entrance is a hall leading to the three bedrooms, bathroom and laundry.

Down a few steps in the opposite direction are the living, kitchen and dining areas.

A wood-burner is the main source of heating, Donald says, and combined with heavy insulation, low-E glass, thermally broken window frames and plenty of sun, means they are always warm; "a revolutionary experience for us, having lived in old villas''.

All the exterior glass is laminated to prevent ultraviolet light fading furnishings, while a ventilation system and heat exchanger improve air quality and ensure heat is transferred from the living area into the bedrooms.

The family spend most of their time in the kitchen-dining area, where a window seat offers views across the harbour to Forsyth Barr Stadium.

"We get a lot of wood pigeons, sometimes flying along below us,'' he says.

"And there's a lot of activity on the harbour: pods of porpoises, interesting boats, seabirds following schools of fish.''

Built-in shelving separates the living area from the kitchen and also hides the television, while the window seat doubles as a bed for visitors.

An extra toilet and plenty of storage are provided in the laundry, a room that Shanley says is often forgotten about in new homes.

In a small house, every square metre needs to function well: "We haven't got wasted space or rooms that are empty.''

While some architects might have used glass on the entire north wall, Ritchie says it is nice to sometimes have respite from the sun and the scenery: "It's about framing the views and creating a variety of spaces ...''

Shanley says the approach gave them good wall-space on which to hang artwork and the architects also included a long shelf for her ceramics collection, a variety of items, many of them made by friends and used daily.

The former Auckland woman moved to Dunedin in 1993 to study at Otago Polytechnic.

At her Macandrew Bay studio, she makes wheel-thrown domestic ware from a white earthenware clay and draws over the cups, bowls and beakers with ceramic pencils.

The pieces are "not overly decorated'', which is also the case with her simple, elegant home built on a scale that she thinks an increasing number of people can relate to.

"I think New Zealanders have still got a bit of a love of bigger homes, but I think it is changing.''