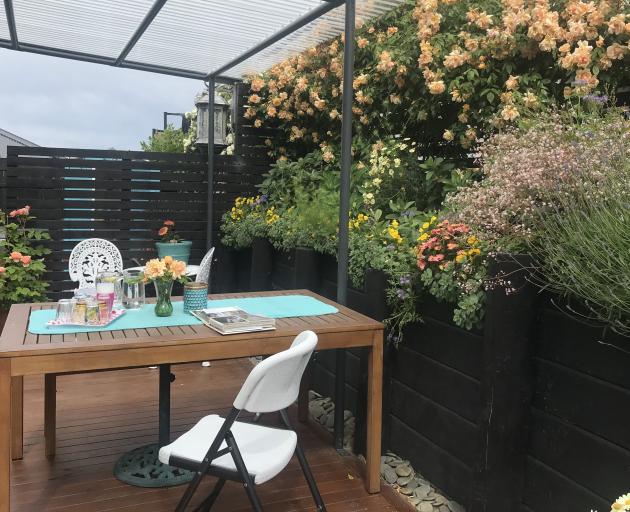 Old roses, including apricot Crepuscule, were propagated before relocation to Oamaru.
Gillian Vine finds lots to admire in a small Oamaru garden. 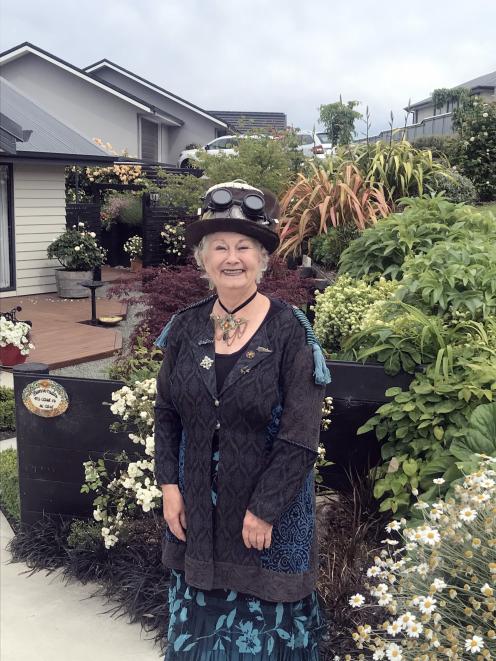 Jill Buckingham, pictured outside Windrush, is an enthusiastic steampunk supporter.
When Jill Buckingham was a tot, she was given a small book called Two Little Gardeners.

"That probably started me on my gardening journey," she said.

Four and a-half years ago she downsized from a large garden in Owaka to a 663sqm section in Oamaru, on which she built a new house.

Starting from scratch was not new: the home of Jill’s impressive collection of heritage roses in Owaka started out as a bare horse paddock.

The Oamaru section was more challenging to landscape, as it sloped and had clay soil "and a tight carpet of couch grass".

The clay was dug out by hand and organic material added, while every bit of soil brought in had to be sieved to get rid of weeds.

"I worked really, really hard in the beginning," Jill said.

Waiting in the wings were 360 pots of plants, all of which she had propagated.

"I think I’ve got a natural green thumb.

"Some had 10 plants in a pot, so I didn’t buy a single plant when I landscaped here."

She admitted taking more than she needed, so a friend took duplicates of heritage roses.

With nowhere to go, even temporarily, until the ground was cleared and revitalised, the plants sat in their pots. When released into their new homes, the roses "without exception ... burst into flower, so desperate were they to have a permanent home". 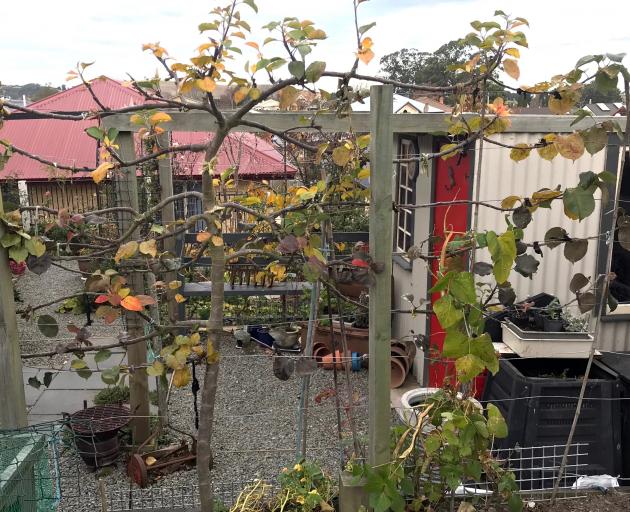 A New Zealand Leptinella fills the gaps between pavers under the clothesline.
She called the Holmes St property Windrush after David Austin’s rose, released in 1984, and has a bush planted as a welcome. In a nod to the street name, Sally Holmes smothers the mailbox. 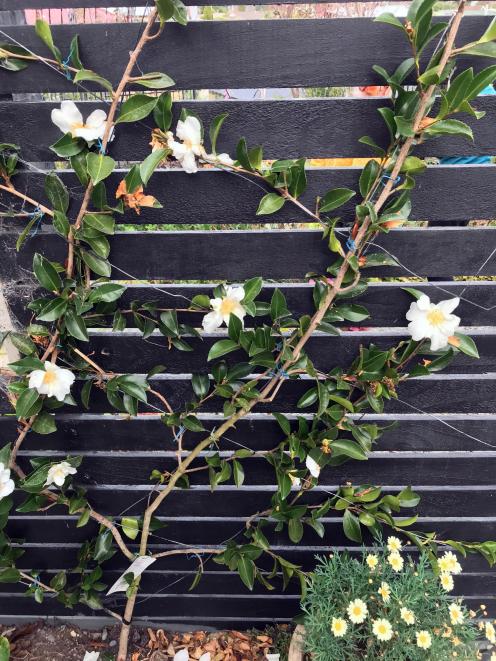 Camellia sasanqua Setsugekka espaliered in classical diamonds.
The back garden is packed with fruit, vegetables and herbs.

New potatoes were ready to eat in October and the last crop harvested in mid-May.

She always buys in new seed and favours Rocket, as it takes only 60 days from planting to harvesting, as well as Jersey Benne.

White butterflies are a problem in summer, so cabbages and other brassicas are planted in autumn, but there is no lack of other vegetables in the summer months.

"I grow a lot of tomatoes, especially heritage varieties and plant Tumbling Tom on the edge of a wall. They fall down and they just go on and on."

Fruit abounds, too, from "millions of strawberries", as Jill puts it, to apples, dwarf Garden Belle pears, grapes, red and blackcurrants, gooseberries, Cape gooseberries and, in big pots, blueberries and Meyer lemons.

"I’ve just put in a citrus grove of eight lemons and limes," she said.

Apples are espaliered to save space, a technique also applied to a winter-flowering Camellia sasanqua Setsugekka. 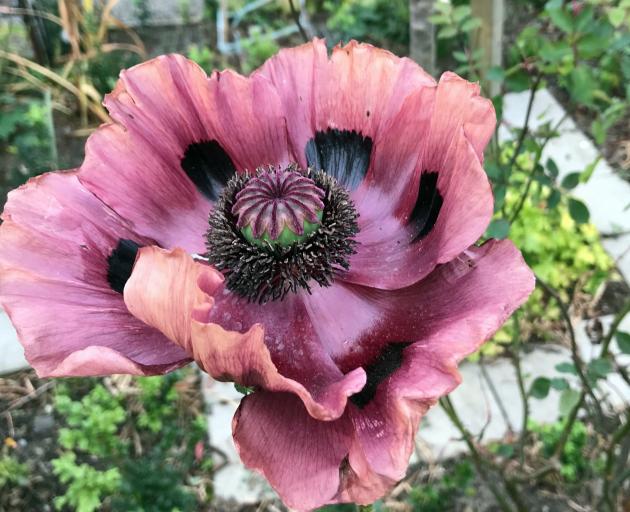 Jill Buckingham describes the poppy Patty’s Plum as ‘‘a real treasure’’.
More recently, with the aim of growing only what the household can eat — and also to free up some space — gooseberries were cut back. 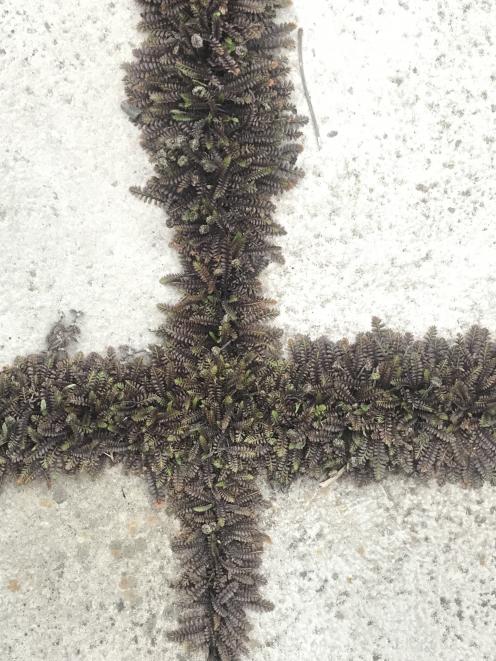 With the leaves gone, Jill’s espaliering of this apple can be appreciated.
Being as self-sufficient as possible was essential, she said.

"People have had a wake-up call [since Covid]. I remember a 2005 talk by Kay Baxter of Koanga Gardens and she said that only four of our vegetable seeds were grown in New Zealand. ‘What if we have a pandemic?’ she said.

"So as soon as the pandemic came, I made sure that I had the seed I needed."

She is strongly anti-spray and was upset to lose a smoke bush and 14 boundary plants because of spraying nearby.

No garden remains static and Jill has spent the past six months revamping it so vegetables now take precedence over flowers, reducing the number of roses by 50 and making the garden less time-consuming.

She is involved in local organisations, including steampunk, and she wants to be able to travel overseas again.

Despite the changes, there are still lots of flowers, including roses, spring bulbs, perennial wallflowers and Jill’s all time favourite poppy, Oriental Poppy’s Plum.

"It’s a real treasure. I don’t covet much but that one I had to have."

"I don’t want the garden to restrict what I can do," she said.