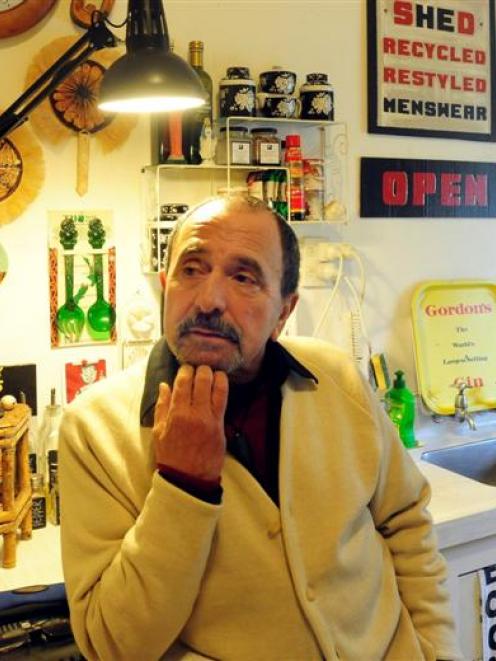 Gordon Clarke in his kitchen. Photo by Craig Baxter.
He dressed British film stars in the 1960s but in recent years has brought his creative talents home.

Gordon Clarke's flair is apparent in his small Port Chalmers apartment that is packed with sculptures and artworks.

So, too, are his foraging skills, most of the pieces being made from things he has found - shells, stones, metal, feathers and bark.

Clarke says he has tried to evoke the New Zealand spirit of innovation - the same sort of resourcefulness that saw previous generations make furniture from beer crates, tea chests and packing cases.

After 37 years in Europe, he returned home to "find his roots", but it was when visiting friends in Dunedin - not his hometown of Auckland - that he discovered the New Zealand he was looking for.

"It's like it used to be when I was a kid. It's still Kiwi here and that's what I've tried to capture."

Clarke was an apprentice cutter at an Auckland clothing firm when it was visited by Hardy Amies, the English couture designer who made dresses for Queen Elizabeth.

Clarke's mother persuaded Amies to look at her son's drawings and before he knew it, 18-year-old Gordon was in Savile Row working on one of Amies' first ready-to-wear ranges.

London in the 1960s was the world capital of cool. As the British economy recovered from postwar austerity, trendy nightclubs opened, pirate radio stations hit the airwaves and the Beatles were invited to 10 Downing Street. New boutiques sold miniskirts, bell-bottomed trouser suits and high-heeled "go-go" boots.

Until then, high fashion was only for the rich, but suddenly designers like Mary Quant were making fashion for young people, Clarke says.

"London was swinging. God, it was a fantastic place to be.

"I was young but working more with classy old broads - Lauren Bacall, Vivien Leigh, Eartha Kitt, Elizabeth Taylor. Hardy Amies did all their beautiful tailoring and [what was known as] the English look.

"Here I am in Cosmopolitan," he adds, pulling out a clipping from the January 1973 issue. The page, headed "Who's Who", shows Clarke posing for the camera with one of his two former wives - both of whom were models - and other "trendies" like Princess Anne, actress Claire Bloom, hairdresser Vidal Sassoon and restaurateur Michael Chow.

Katharine Hepburn even slept on his sofa after having dinner at his house.

Later, the New Zealander had his own fashion label, was voted 1978 women's wear "designer of the year" in London and was a freelance consultant in Italy, working on, among other things, Armani's first underwear range.

He also designed lights using natural materials such as rock, rope and even porcupine quills.

For the past seven years, he has lived in the creative seaport of Port Chalmers, where his home is like a gallery, a work of art in itself.

In Florence he designed home furnishings in a 14th-century pottery studio with a stream running through it. Here his work space is the dining table or kitchen bench. He rolls canvas out on the floor and puts on music or the television: "I love having everything around me ... and the wonderful old feeling of a Kiwi villa that Dunedin is so full of."

He also likes the idea of giving life and new identities to things others have thrown away, he says.

So, in among the family photos, paintings and comfortable old sofas are items bought cheaply at secondhand shops.

"It's taking the ordinary and making it something extraordinary, which I absolutely adore."

One of the most striking artworks in his rented rooms in the former Royal Hotel is made from an old chain found half-buried in mud at Careys Bay.

A lamp base in the hall was made from ice-block sticks. Identical feathers in one artwork were collected over years of walking his dogs around Back Beach. The chest of drawers in his bedroom cost $2.50 at a local garage sale. The chocolate brown bathroom overflows with greenery.

Two hundred women filed through the apartment during a school fundraising tour and many more went through his previous house, decorated in similar style: "I thought it might have been too avant-garde, but they loved it."

The 64-year-old says he got his "arty-farty" streak from his mother, a hardworking Maori women's welfare officer, who once made dining chairs from oil drums lined with velvet.

New Zealanders used to think if something came out of Europe it had to be good. But now they are gaining in confidence, he says, adding there is a certain realism in New Zealand that comes through in our products.

"When I've talked to art and design students, I've said, 'Don't try to be European. Be Kiwi because this is what the world has run out of: that earthy, laid-back, human element'."