Gardening club goes back to basics 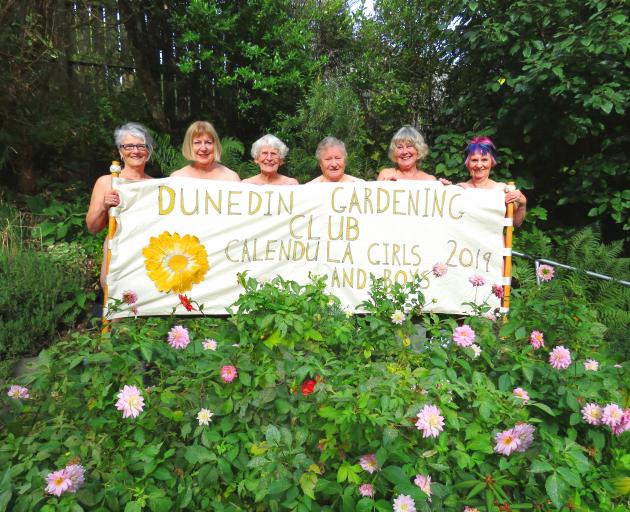 Fred Earl calls himself "a perennial gardener, someone who gardens for ever".

Certainly, the Dunedin man and his wife, Gaynor seem to show no signs of slowing down, even at 87. One of their bravest exploits recently was to strip to the buff to be photographed for a fundraising calendar for the Dunedin Gardening Club (DGC), of which they are the longest-serving members, having joined in 1980. (Their friends, Phyl Beagley and Isabel Goodman, joined a year later.)

This is the second time the Earls and Isabel have stripped for a DGC calendar. This one is a centennial project for the club, which celebrates the milestone in March. The format is similar to the earlier one, published for the club's 90th anniversary.

The theme is floral - Fred's vegetables apparently were not tall enough to allow him to pose tastefully - with club members and friends enthusiastically offering their gardens as settings for Kirsty Irvine's month-by-month photos.

Among the group photographed for the calendar's cover was Daphne Bates - at 93 the club's oldest member. She is a keen supporter of the Steady as You Go programme and still leads two classes.

One of the foundation members of the DGC when it was formed in 1919 was David Tannock, superintendent of Dunedin's gardens and reserves from 1903 until 1940, and a respected garden writer who spoke to the DGC on topics such as alpine plants.

He and other early members were also linked to the Dunedin Horticultural Society, whose shows DGC members supported.

Unfortunately, the loss of many records means the club has had to rely on newspaper accounts of early events, and although speakers were noted and the annual meeting reports in the Otago Daily Times usually gave all the office bearers elected, ordinary members were rarely mentioned.

Midge Ruka is always hopeful old records, photos and show cards will come to light, and encourages anyone who has memorabilia to share it with her.

Three generations of one family are known to have been members: Judy Tait's parents joined the DGC in 1981, then she followed their example, and her daughter, Susan, is now a member, too.

The club continues to attract younger members, which Midge attributes to the friendliness of those in the club and their "go ahead" attitude, which encourages people to step out of their comfort zones, not least by taking part in the calendar project.

As well as speakers at the regular meetings on the second Tuesday of each month in Dunedin's Church of Christ hall in Filleul St, there are visits to gardens.

Outreach into the community is important, not only in promoting gardening, but in such activities as helping maintain the Otago Community Hospice garden, supporting the annual Waikouaiti musical and donating a defibrillator to Dunedin's Community House.

The club's flower is a calendula, so the calendar is called "Calendula Girls + Boys".