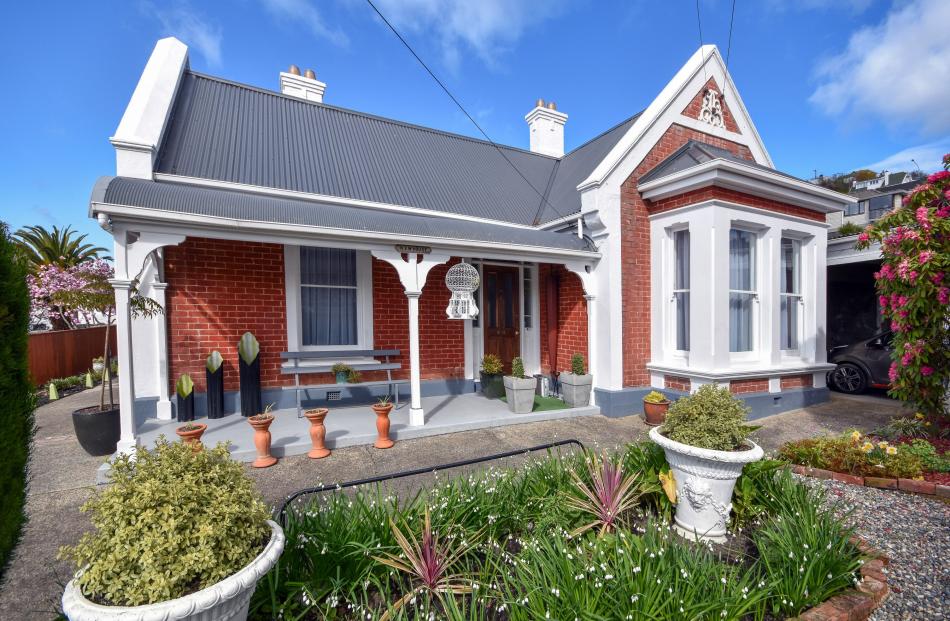 Surrounded by a cottage garden, Kew House is charming inside and out. 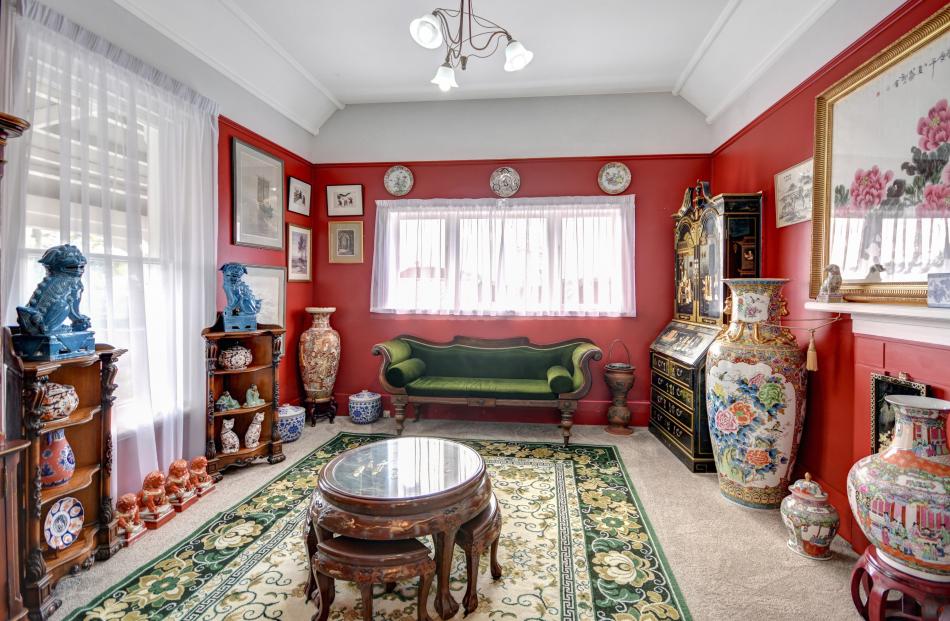 A pair of blue foo dogs, or Chinese guardian lions, sit in one of the front rooms. 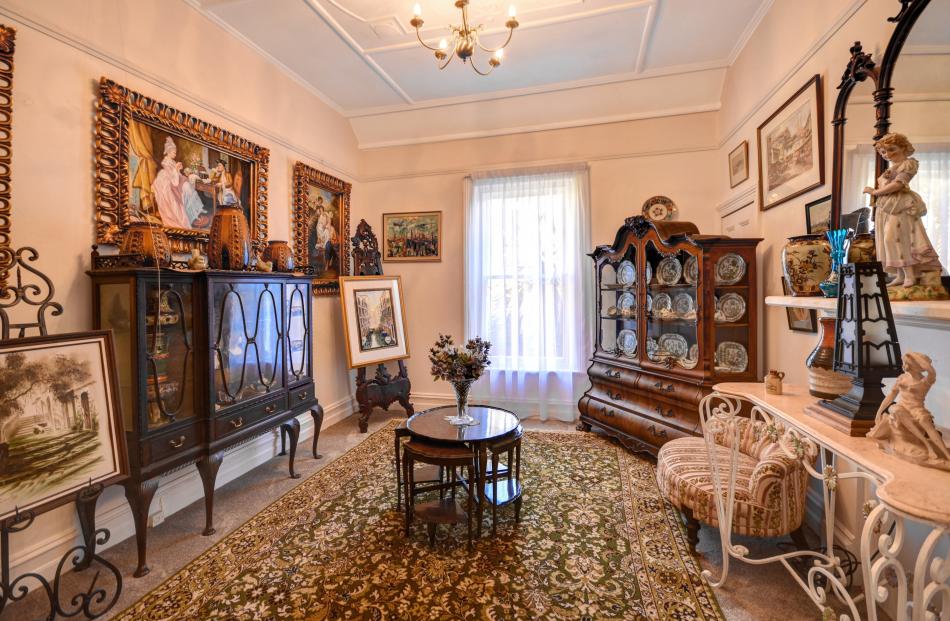 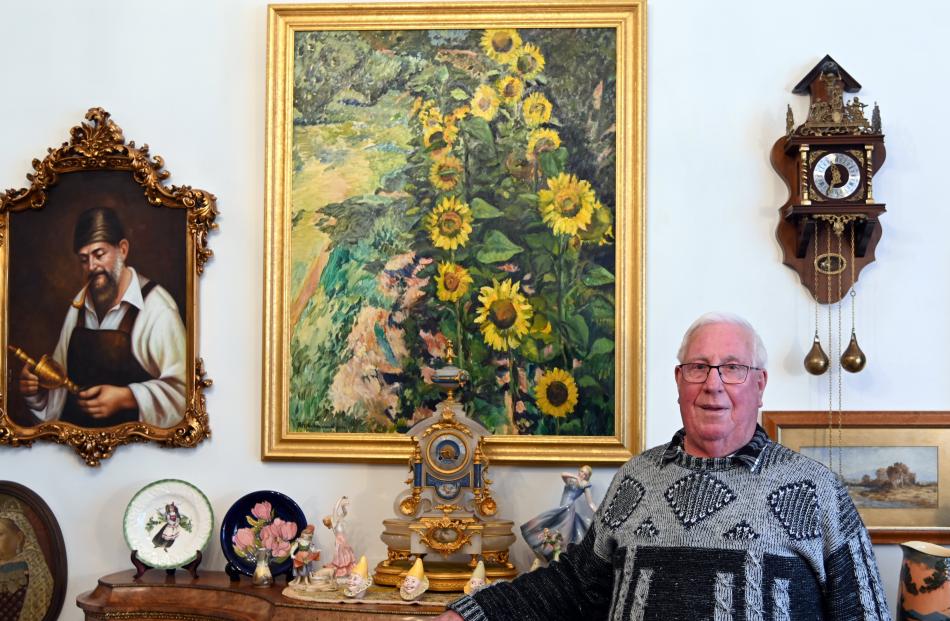 Bob Fitzpatrick says specialising in perfect examples of one thing would be "boring". The oval portrait of Queen Victoria (bottom left) is one of his latest purchases.PHOTO: CRAIG BAXTER 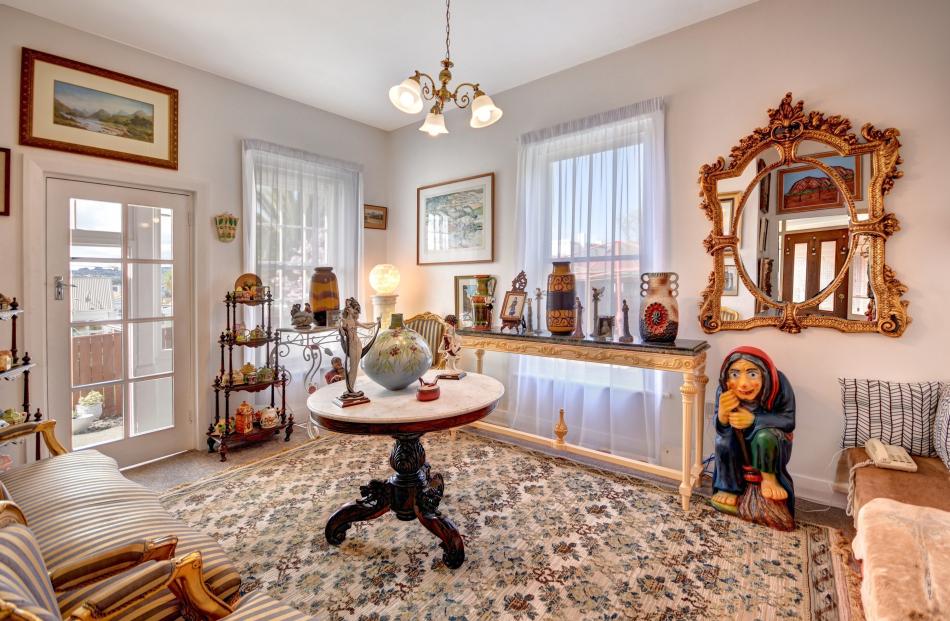 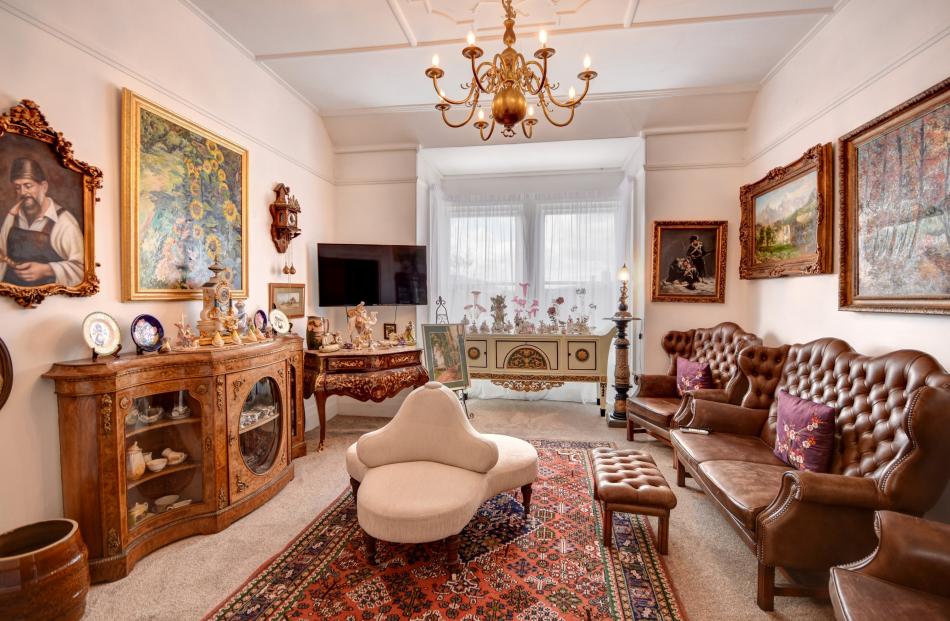 The three-seater chair in the centre of this room is one of Mr Fitzpatrick’s favourite pieces of furniture. PHOTOS: WAYNE MAGEE 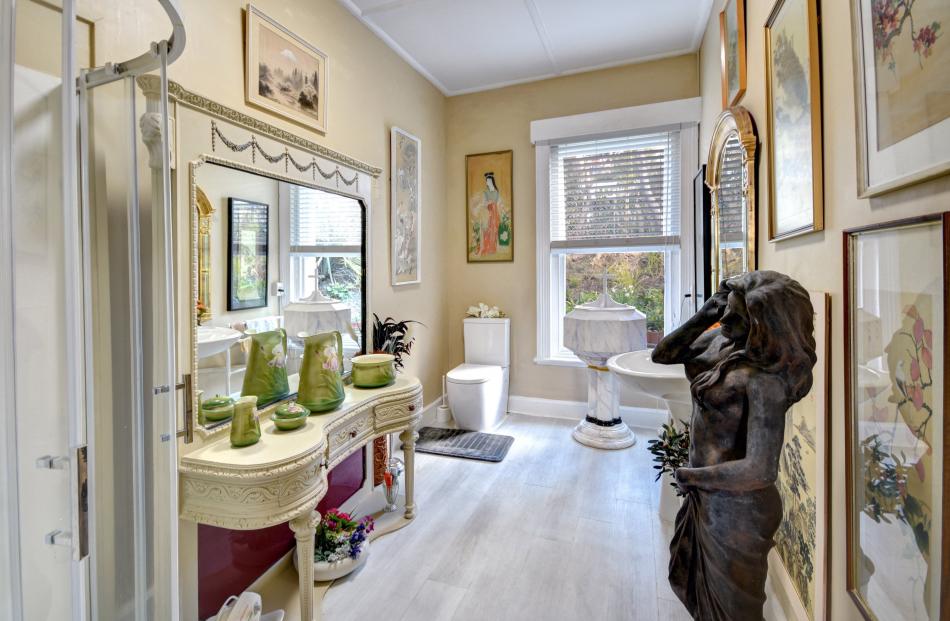 The christening font (seen in the back middle of this photo) holds rolls of toilet paper. In the 1870s, it was in the Church of St Michael in Palmerston. 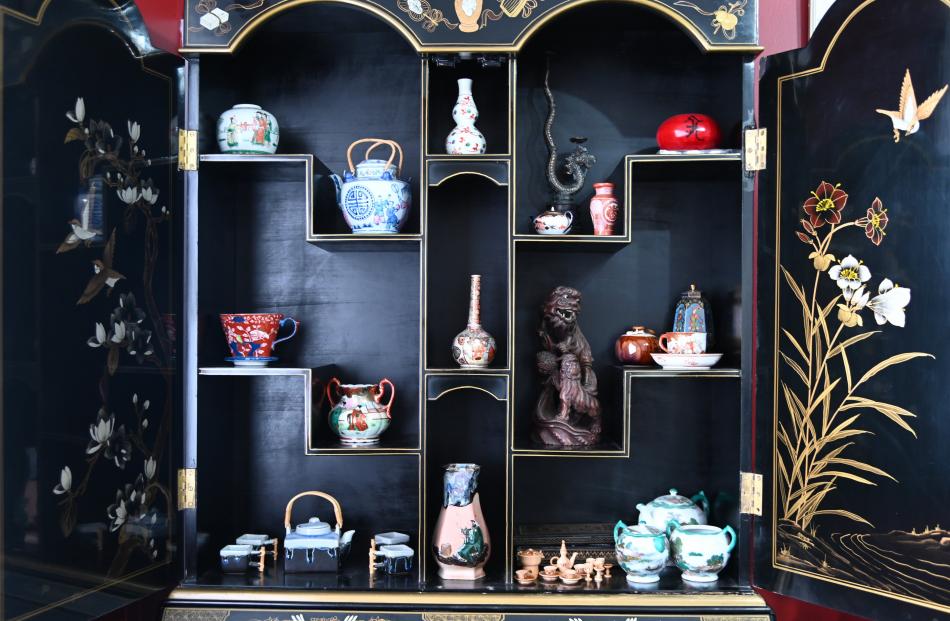 Miniatures are displayed in a painted cabinet. Right: A light inside the front door illuminates the hallway.PHOTO: CRAIG BAXTER 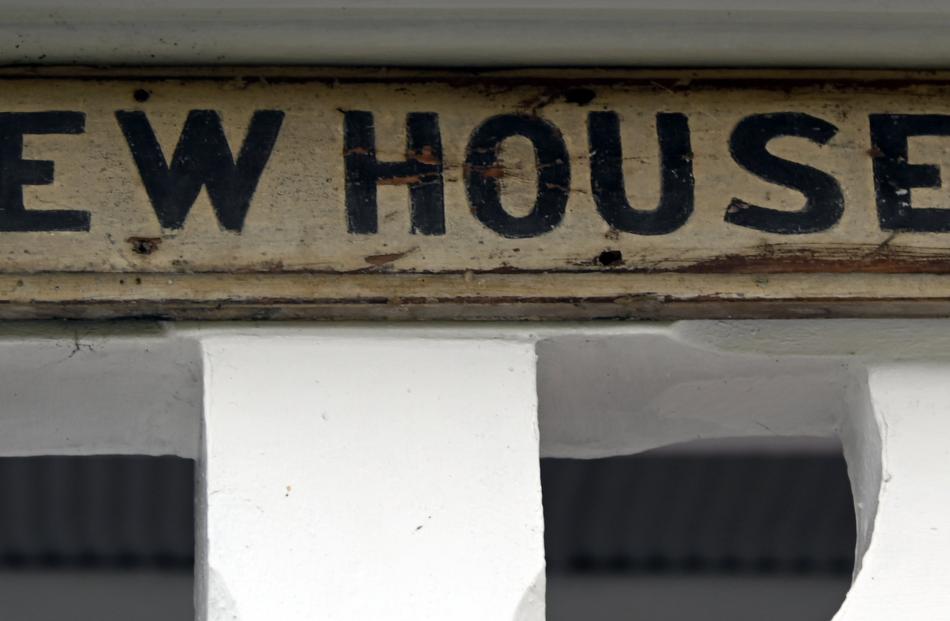 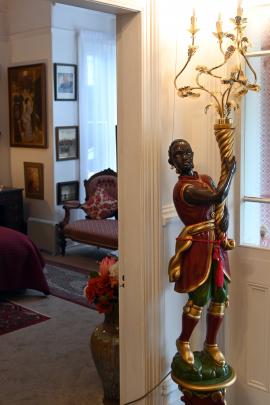 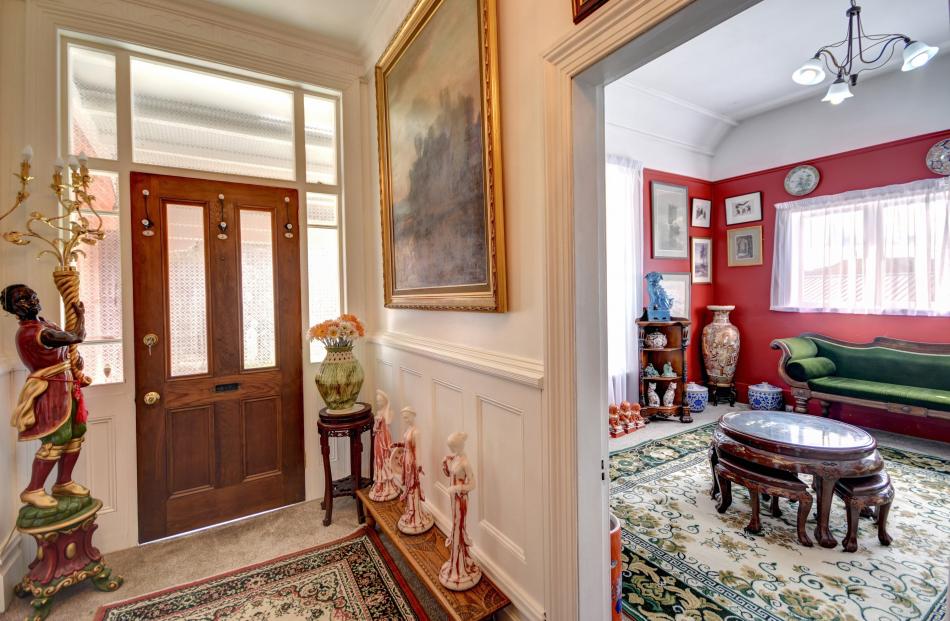 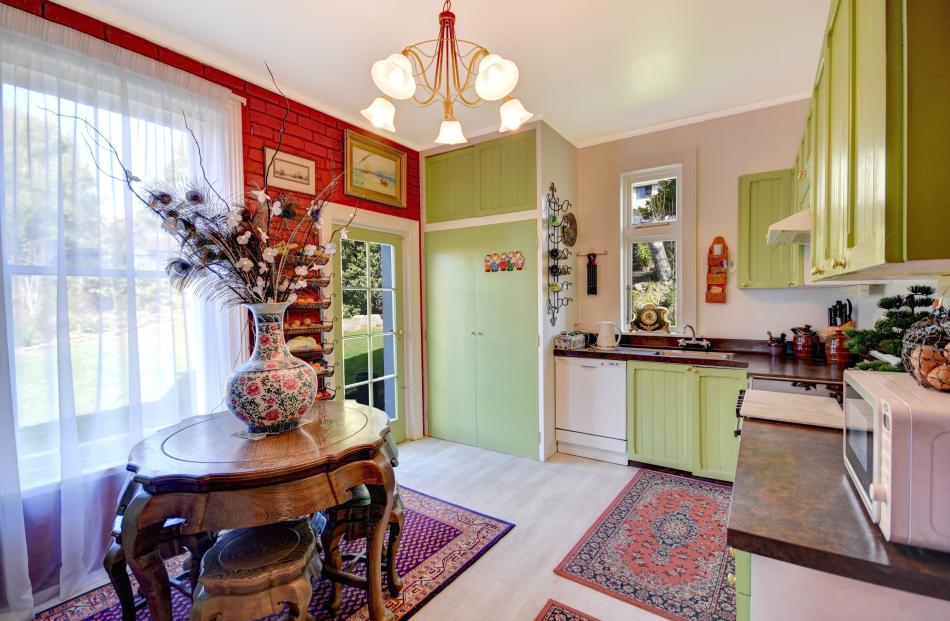 Bob Fitzpatrick likes nothing more than searching for a new treasure for his Dunedin house. Kim Dungey reports.

Avid art lover Bob Fitzpatrick has turned his home into a living gallery.

The three-bedroom house is full of porcelain and furniture. One hundred and thirty-five paintings line the walls. A wooden, spire-like object hangs by the front door, a wicked witch lurks in the living room and a christening font stands in the bathroom.

The retired typographer says he "loves hunting" in the auction houses and junk shops of Dunedin.

"It’s getting harder and harder to find the unusual pieces and that’s what I like looking for... But I just can’t stop. I’ll collect until I die."

Known to some collectors as "Mr F" and to others as "Bobby", Mr Fitzpatrick has been a regular at auctions for about 70 years. It all started as a 6-year-old, when he began accompanying an uncle to them on Fridays and occasionally headed home with a lead toy.

Over the years, he has seen tastes change and once sought-after objects, such as Royal Doulton, fall from favour.

He enjoys talking to fellow collectors but likes out-bidding them even more.

"If you’re both after the same object, you’ve got to be one [step] ahead of them to get it. You’ve got to try different ideas like not starting early, waiting til late or looking around at another object and pretending you’re not interested ..."

His hall has hand-embroidered pictures, screens inlaid with jade and a large oil on canvas of Gustav Klimt’s famous "woman in gold".

The 2m-wooden "spire" was probably connected to grain sowing, the plaster witch was possibly a promotional tool for Disney’s Snow White movie and the christening font, now full of toilet paper, "makes everybody laugh". 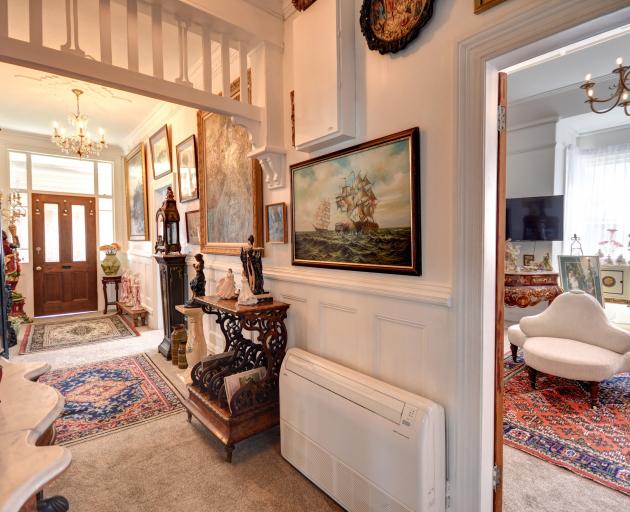 Paintings line the hall.
But there are a few things he does not like at auctions — jewellery, watches, babies and children.

"They make too much noise," he says, of the last two. "I think they should be banned."

If he really likes something, he will pay "anything" for it, but one of his favourite items is a painted wooden plate with little monetary value. An uncle bought it in Egypt before being killed in action during World War 2.

The Dunedin man, who dusts weekly and hangs every picture himself, does not appear to regard his house as anything out of the ordinary.

"You get used to it after a while."

"A lot of people love it. Some think it’s full of clutter, but I just laugh. It’s me. That’s it."

The opera-loving 79-year-old rises at 5.30am every day in order to get things done, but says he hates cooking, is "absolutely useless" at anything mechanical and will take "five or six goes" to get a nail in straight — "My fingers will be covered in bruises. Blood everywhere. You’ve got no idea".

"The walls here are double brick so when I put nails in, of course they bent. You just crossed your fingers [and hoped] that you got them where the cement was."

The move to Kew House near the Forbury roundabout took place last year. The character property had street appeal, a homely feel and big rooms that were ideal for displaying art. 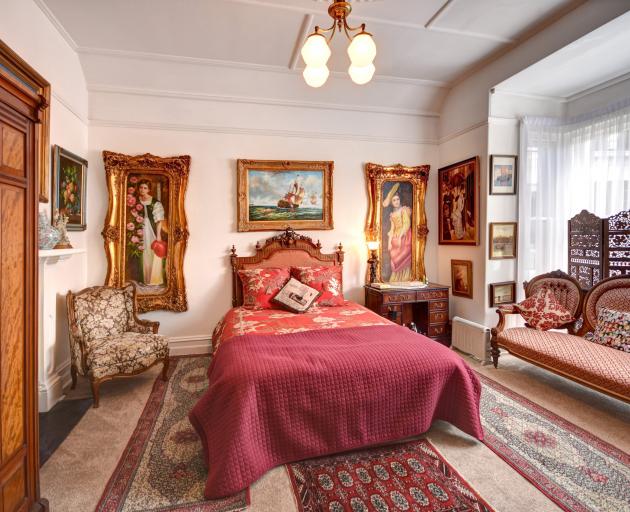 The main bedroom.
He replaced the roof, wiring, carpet and drapes, repainted and filled 22 skips with rubbish, including weeds.

But the 940sqm section has become too much for him and he is now looking to move to a bigger house on a smaller site. If that does not eventuate, he will fill the back yard with early farming machinery.

"Then I won’t have to cut the lawns."

As for how he can afford such a hobby, he says he doesn’t travel and would rather go without meals than without art.

"It’s like a drug — an expensive one — so I’m pleased there’s only one [antique] auction a month."

Despite the house being full of treasures, he still thinks it needs a wow factor — "something that stands out, like a great big statue or something very unusual".

The walls and the cupboards might be full but the "hunt" continues.