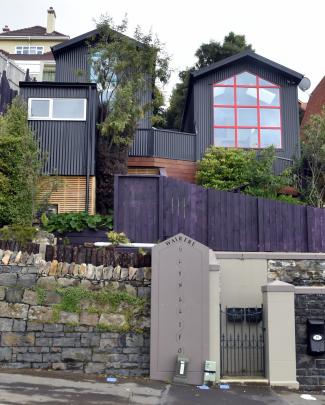 These two tiny houses were squeezed on to a steep section in central Dunedin. One has a separate laundry and storage area ... 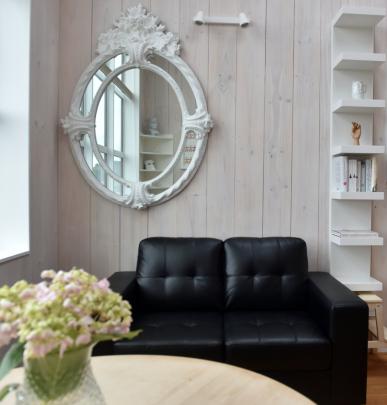 The whitewashed boards on the walls are the same boards used in the cross-laminated floor and roof panels. 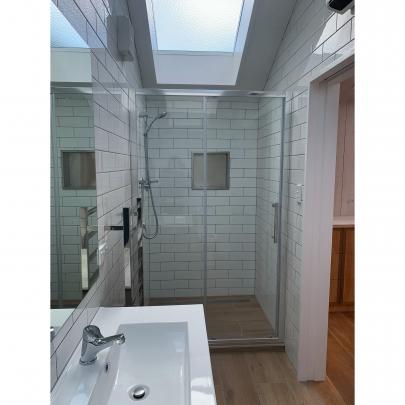 The owners wanted the houses to be simple and functional. 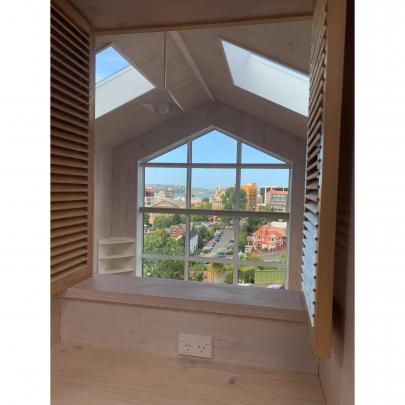 The bedroom in the larger unit is at the back of the property but connects to the view at the front through an internal window. The shutters can be closed for privacy. 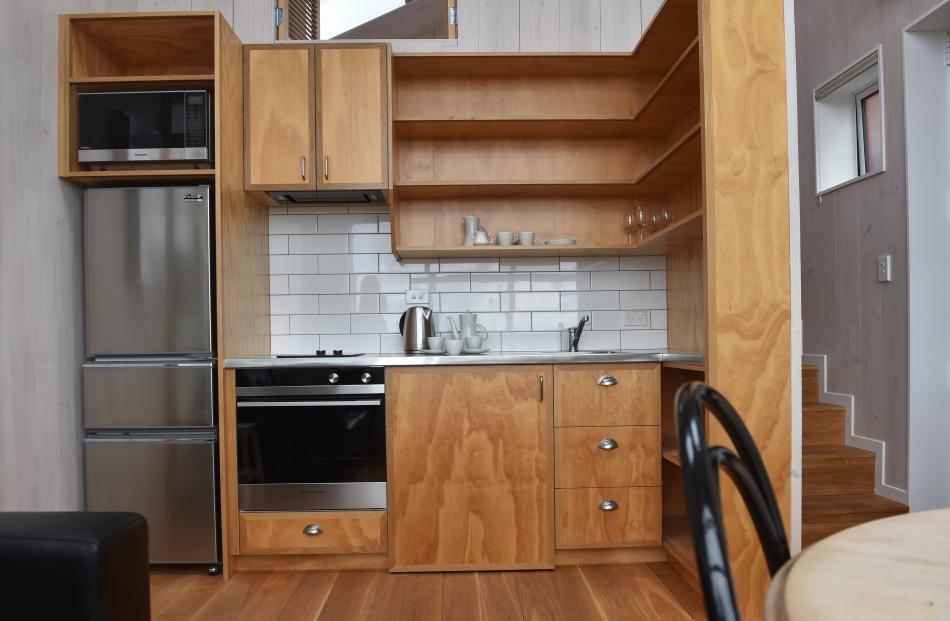 The kitchen in the larger unit, with stairs at right leading up to the bedroom. A combination washer-dryer is integrated into the joinery. Because of the difficulty of getting gas bottles on to such a steep site, the houses also have piped gas. 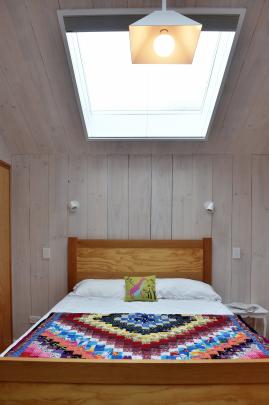 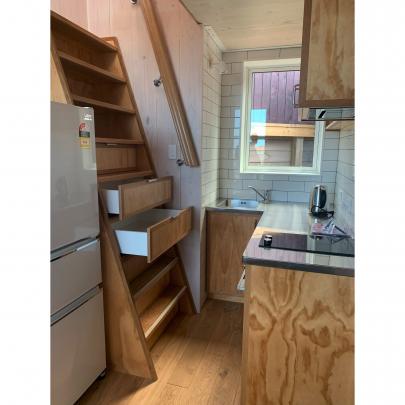 The smaller house has steep stairs leading to a loft bedroom; drawers pull out from each tread. 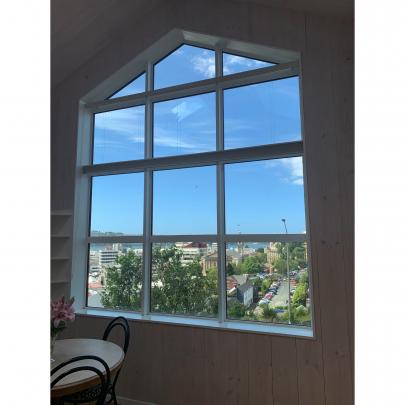 Both houses have outstanding views towards the Dunedin Town Hall. 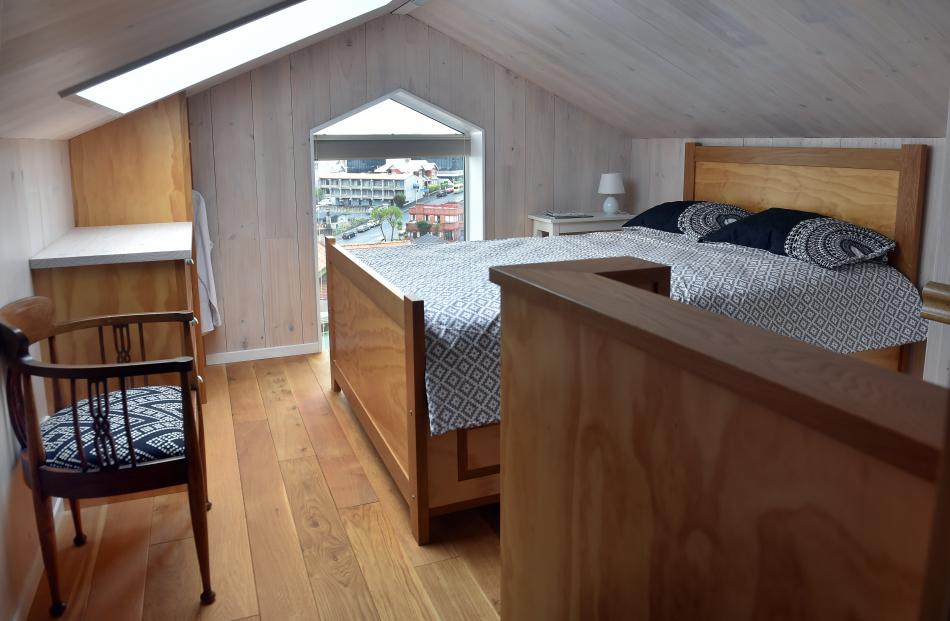 The bedroom in the smaller unit. The floors are oak and the joinery is ply with an oak trim.

Site constraints can lead to innovation, as these two houses on a small, steep plot of land show. Kim Dungey reports.

As the Dunedin City Council plans more areas of medium-density housing, two small units have taken shape in the front garden of a central city property.

One is just under 33sqm; the other is only 14sqm. Together, they sit in an area of large character homes.

Architectural designers Sarah Copeland and Bevan Wood, of Eco Workshop, said while the rental units did not quite fit the definition of medium-density housing, they did expect to see more secondary dwellings built now the council has proposed district plan changes to provide for more housing.

"In the past, a big old character house [might] be broken up into three apartments or nine bedrooms and a kitchen," Wood said.

"[The changes will] enable you to put two or three one-or two-bedroom units on a site. You’re increasing the housing supply and catering to different markets ..."

The houses were deliberately lined up with neighbouring ones so they would not dominate the rest of the street. PHOTOS: PETER MCINTOSH, SARAH COPELAND
Fourteen new medium-density areas, where the density of housing could be increased, have been identified by the council. These include parts of Mosgiel, Mornington and North East Valley. Rule changes would also allow for smaller sites and duplexes. Proposals are online at www.dunedin.govt.nz/2gp and public submissions close on March 4.

The owners of these houses are artists who have lived in their Cargill St home since the early 1980s. Originally, the only access to their door was a flight of 79 steps from the bottom of the street. However, several years ago — after buying, selling and surveying land — they gained level access to their property.

The long, winding steps became redundant and the land on which they were located became a separate section. 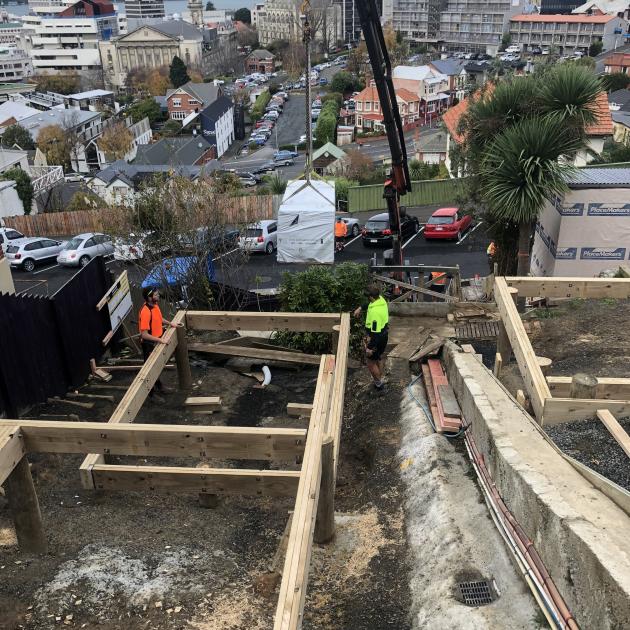 Pre-made panels are lifted on to the steep site, which has services running down the middle.
However, building on it was not straight forward. The steep, 375sq m site was slowly developed over time by removing earth and building several retaining walls. Plumbing, water and gas lines which serviced the surrounding houses ran down the middle and could not be built over.

Given those pipes and the houses on either side, "the margin for error was millimetres", said Copeland, who was the lead designer and completing her first project from start to finish.

There was also no room for storage so walls were pre-nailed off site and, along with almost everything else, were lifted in by crane from the bottom. 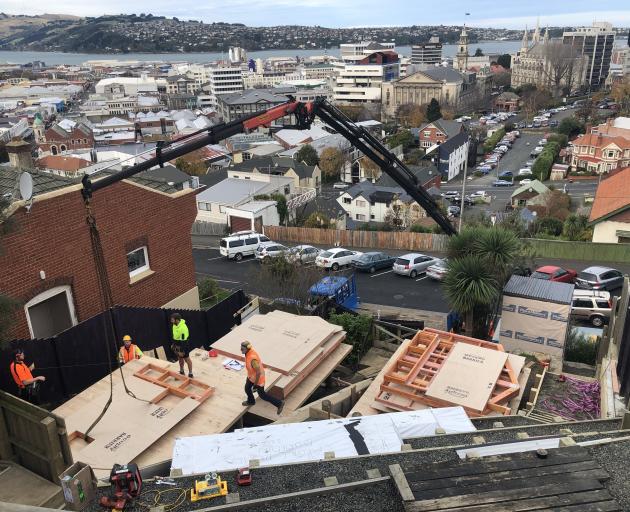 Cross-laminated floor and roof panels offered speed and ease of construction on a site that was so difficult to access.

Timber steps between the units are removable to allow access to the services running down the centre.

The houses have a prominent position and dark iron cladding but the designers wanted them to feel "delicate" and to not dominate the street.

"It was a deliberate decision to keep them in line with the [neighbouring] houses and not pop out and say, ‘We’re new, we’re brash, it’s our street’," Wood explains. "There was a respect for the heritage." 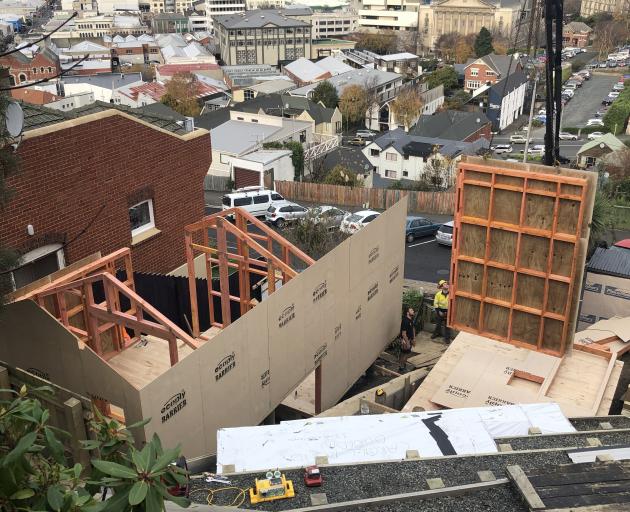 Large, south-facing windows provide panoramic views over the city while skylights fill the interiors with natural light. Whitewashed pine walls and high ceilings — 3.5m in one living area, 2.3m in the other — add to the feeling of openness.

In the smaller house, stairs leading to the loft bedroom have drawers that pull out from each tread — an example of the built-in storage that minimises clutter.

The bedroom in the other unit has an internal window overlooking the main living area. Shutters on the window can be closed for privacy or left open to let in light and connect with the view.

One of the owners, who refers to the buildings as "the chapel" and "the cathedral", said they were a good example of what could be done on a small amount of land.

"It took years of thinking about it, and several plans, but this is so nice and simple that it feels sort of perfect." 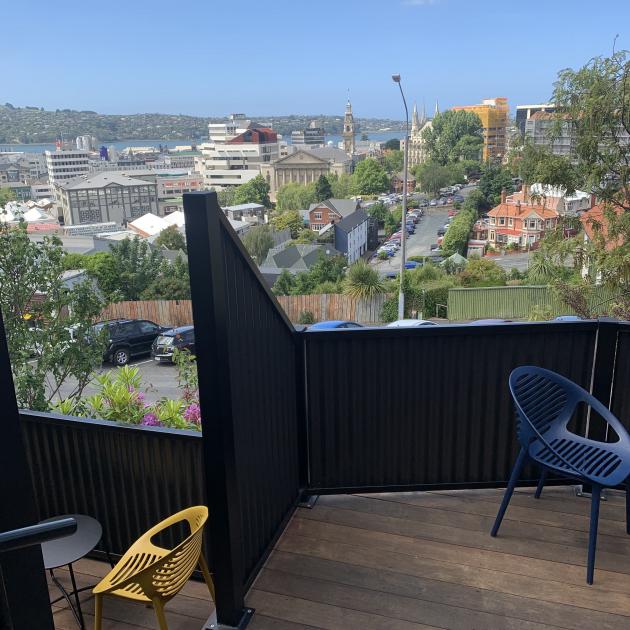 Each unit has a small deck with expansive views over the city.
Wood said other secondary dwellings his firm was working on had out-of-town owners: "Some of their motivation is profits. But the benefit for the population is you get increased density. It’s just [a matter of] making it look good and work well."

Recently it was reported that buildings up to seven storeys high were being allowed in parts of Auckland and this had resulted in neighbours banding together to sell adjacent properties as a “block” to developers. The remaining residents were unhappy about the change in their neighbourhoods’ character, schools filling up and the fact no parking had been planned as part of the new buildings.

The Ministry for the Environment has effectively removed minimum car parking requirements from district plans in an effort to enable more housing and commercial developments, especially in higher density areas where people do not necessarily need to use a car to access jobs, services or amenities.

Copeland said many people did not like change but there was virtually no flat space to build on in Dunedin and the majority of people now preferred smaller, well-designed houses to larger ones. 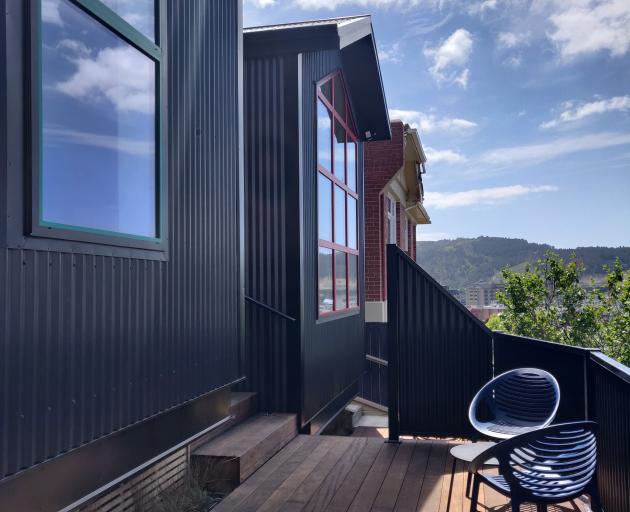 The homes’ dark Colorsteel cladding is punctuated with red and green window frames.
Local people were already seeing the potential for secondary dwellings when looking at properties, Wood added.

Everyone deserved to live in a dry, healthy home but there was a major shortage and increasing density was a good way to address it.

"We can’t have 100 new subdivisions out at Mosgiel."

"With increased density, sometimes can come increased conflict, but if you can manage that with screening and outdoor amenities, I don’t see a downside."