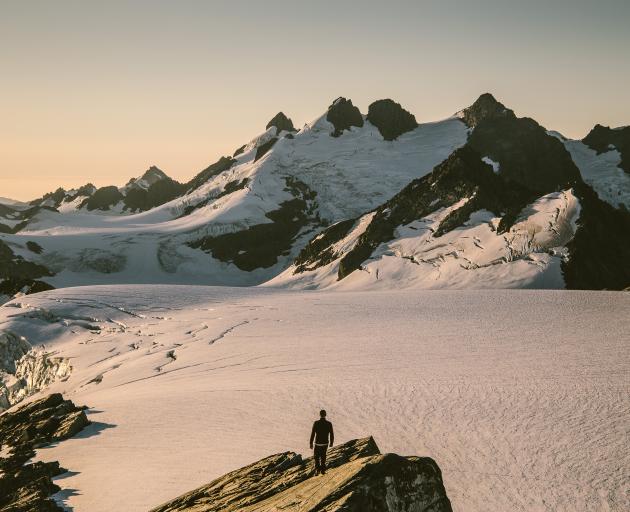 Assoc Prof Nicolas Cullen looks over the Garden of Eden, Southern Alps. PHOTO: ANGUS DOWSON
Prospects for the ski season are looking good. Longer term, the future is still in our hands.

The shortest day of the year is upon us and there are lots of people who are waiting in anticipation to see what gifts the winter will bring, especially those who like playing in our snow-capped mountains.

There is a justified sense of celebration and excitement in the air, and rightly so. We have navigated our way through an enormously challenging period. One of the little rewards of this effort is the freedom to enjoy our mountains without any restrictions, and for the first time in a generation, we will almost have them to ourselves.

The winter has begun well, especially if we consider the remarkably warm and settled weather we experienced during lockdown. Recent snowfalls and low night time air temperatures associated with persistent high-pressure weather systems have provided ideal conditions for snowmaking. Ski field operators have good reason to be feeling optimistic and if the mountain gods play their part it may very well be a winter for the ages.

But how long can we really expect the mountain gods to keep providing snow for winter recreation, as well as contributing to the natural storage of water that we use for hydro-electric power generation and irrigation? We are hardly making things easy for them, with atmospheric warming at the national and global scale accelerating at an unprecedented rate. The good news is that imagery obtained from satellites orbiting the earth has shown us quite conclusively there has not been a decrease in the snow-covered area in the Clutha catchment since the turn of the century. In fact, the artificial snowmaking at Coronet Peak has been so successful it is clearly detectable from space.

The not so good news is that projections of seasonal snow indicate that at a national scale, snow duration, the proportion of precipitation that falls as snow and peak snow accumulation will decrease significantly by the end of the century. For example, there is modelling evidence that indicates that the natural snowpack at the elevation of the car park at Coronet Peak will decrease by about 50% by the end of the century.

Making projections for how seasonal snow and the volume of ice stored in glaciers in the Southern Alps will change over the 21st century is not trivial. The main reason for this is that we don’t yet know the route that society will take in tackling the climate crisis. There are of course scientific uncertainties in making projections; climate model uncertainty, snow or glacier model uncertainty and natural variability, but by the end of the century, the uncertainty related to changes in seasonal snow and loss of glacial ice will be dominated by the choices we make to mitigate greenhouse gas emissions.

There has been a group of us working on a Frozen Water Resources project as part of the Deep South National Science Challenge. We have made significant progress in refining the way we model seasonal snow and the response of glaciers to changes in the climate system. Our projections are arguably the most robust that are currently available. They clearly show that glaciers will continue to decline in the future irrespective of climate scenario but there will be a difference in the outcome depending on our greenhouse gas emission pathway.

Importantly, what this tells us is that we still appear to be in position to have some control on what we want our future to look like. I hope we make decisions that allow us to curb greenhouse gas emissions to help protect our frozen water resources. Part of my motivation for wanting us to do so is probably no different to many of you. I just want my daughter, or our future generations, to have similar opportunities we have had to enjoy what our mountains offer. But it also goes much further than that. I want to be part of a generation that implements effective strategies to ensure that we manage the water we source from our mountains in a much more sustainable and equitable way.

We have an election looming, and I will be using my vote to elect political leaders who demonstrate at least some capacity to provide a pathway for us to achieve this.

- Nicolas Cullen is an associate professor in the University of Otago School of Geography and a member of the Mountain Research Centre (MRC) and He Kaupapa Hononga: Otago's Climate Change Research Network.