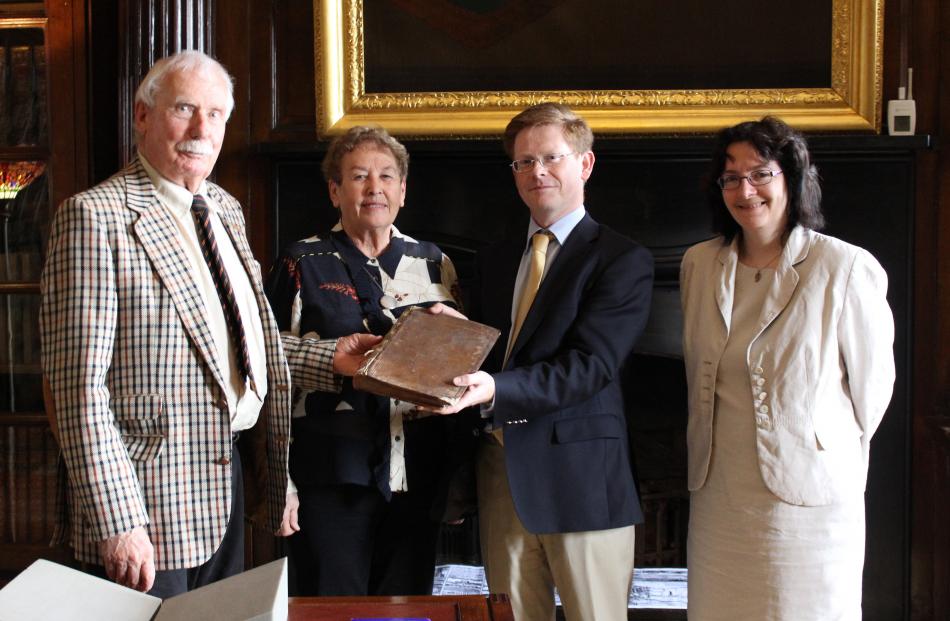 From left, Peter and Cleone Blomfield recently travelled to Dublin to donate the 17th-century Worth family Bible to the Edward Worth Library. At the handover are Eoghan Mooney (chairman of the Worth Library Trust) and Elizabethanne Boran (librarian of...

A Queenstown couple's curiosity about an old family Bible has taken them on a journey of great distance and genealogical discovery that touches on a 17th-century Dublin dean and his doctor son, accusations of heresy, as well as adventurers who had a hand in shaping this country. Shane Gilchrist reports.

Peter and Cleone Blomfield's Queenstown home is full of books. So much so, in fact, that the couple organised a clean-out of some early in 2012, sifting and sorting various tomes for an auction of rarities.

In preparation, Mrs Blomfield composed a few lists: ''Flora and fauna of early New Zealand'', ''old New Zealand maps'', ''books on early Maori settlement and in Maori'', as well as old geological surveys and some on mountaineering.

Several old Bibles were also scrutinised. One, in particular, piqued Mrs Blomfield's curiosity and has since taken the couple on a journey of genealogical discovery as well as great distance.

Printed at Cambridge in 1629 by the university's printers, Thomas and John Buck, the King James Bible was a significant find. It substantially expands the knowledge of a prominent Dublin family in the late 17th century as well as providing a fascinating provenance that touches on biblical scholars, migrants to New Zealand as well as explorers and adventurers who had a hand in shaping this country.

Looking at the quill ink writing in the Bible detailing a lineage dating back to 1673, Mrs Blomfield asked her husband about the genealogy.

''His response was, `Not my family','' Mrs Blomfield recalls.

''I said, `It's amazing - it's a family tree and letters. There must be someone who will want this'.''

The Bible now sits in a glass box at the Edward Worth Library, Dublin. The Blomfields recently visited the Irish city as guests of the institution, to which they have donated the Bible.

Named after Edward Worth, a notable Dublin physician and housed in Dr Steevens' Hospital, of which Worth was a governor and major benefactor, the library is one of the lesser-known treasures in a city brimful of cultural significance.

Worth (1676-1733) was a physician whose taste in books radiated outwards from his professional concern with medicine. According to the facility's librarian, Elizabethanne Boran, ''he collected as a man of science, a gentleman, and a connoisseur'', especially after receiving money from his uncle, the chancellor of the exchequer.

As well as medical books both ancient and modern (some date from the 15th century), the library's shelves house important contributions to the study of related sciences, philosophy, the classics and history.

Worth was particularly interested in the book as object: the collection holds fine examples of 16th-century typography and is considered to be the best collection of early modern bookbinding in Ireland.

Yet the signature on the title-page of the Bible is that of Edward Worth's father, John Worth (1648-88), Dean of St Patrick's Cathedral, Dublin, who used the flyleaves of the book to record the births and deaths of many of his children, as well as his wife, who died in childbirth.

Logically, Mrs Blomfield used the Worth name as a starting point for her research.

''Then I researched names. Most Worths were in southern England, fewer in Ireland. I downloaded all the Worths in the Dublin telephone directory but hesitated to ring. I explored online biographies in line with the dates but I found nothing of interest.''

A breakthrough came when Mrs Blomfield did a simple Google search. Using ''John Worth + date + Dublin'' she discovered John Worth, Edward's father, and his uncle.

She emailed the National Library of Ireland and various Dublin city libraries, providing all her genealogical research, but received no replies. Eventually, she came across the Edward Worth Library site.

''I wasn't thinking in terms of Edward as a name but when I read through `The Enigma of Edward Worth' on the site and looked at the names of John Worth's children, I found an Edward. The birth date was not quite right but then I could see that it had been guessed at as many such records in Ireland were destroyed by fire.''

Mrs Blomfield then emailed the Edward Worth Library and, ''quite excitedly'', waited.

''The next day, Dr Boran replied. She quite sensibly asked for photos. Peter was away that day so I spent time organising the background and suitable light for taking the photographs of the Bible and contents and then emailed them, feeling certain that this was, at last, the end.

''Elizabethanne Boran replied and confirmed what I suspected.''

THE Worth family Bible, as it is described by the Edward Worth Library, also includes important information on other owners.

The front pasteboard bears the inscription ''C. Wellbeloved York'', referring to Charles Wellbeloved (1789-1858). A Unitarian minister of some renown, he was expelled from a theological college on suspicion of heresy.

Accompanying letters showed that after Charles Wellbeloved the Bible came into the possession of Benjamin Harris Cowper (1822-1904), the author of, among other works, The Apocryphal Gospels. (Many of Cowper's books have been recently digitised and put online.)Cowper, like Wellbeloved, was a biblical scholar educated in Latin, Greek, Hebrew and, in particular, Syrian-Hebrew; he also shared the latter's interests in antiquities.

The second letter makes it clear that the ''W'' in ''E.W. Newenham'' stood for ''Worth'' and that Cowper was, in fact, attempting to contact descendants of the original owner, the Rev Edward Worth Newenham.

''It is not known whether it was Newenham who decided to sell the Bible or whether this decision was taken by his descendants, though it seems more likely that this event took place after his death in 1892. In any event, the book did not stay at Coolmore [the family home] - for its next destination was to New Zealand,'' Dr Boran writes.

The journey taken by the Bible to arrive in the possession of the Blomfields is a fascinating story, which the couple have pieced together as follows: Peter Blomfield was certainly given the Bible by his father, Dennis Blomfield, who in turn probably inherited it from his father, Sidney Blomfield.

While it is possible Sidney may have bought it himself, Peter considers this unlikely, as Sidney was a sailor and did not leave any other books to his family. A far more likely candidate for the acquisition of the Worth family Bible was Sidney's mother-in-law and Peter's great-grandmother, Amelia Rochfort (1845-1942).

Amelia was the daughter of Henry Lewis (1815-89), and the wife of John Rochfort (1832-93), two men who played important roles in the surveying of New Zealand: both the Lewis Pass and the Lewis River on the South Island are named after Henry Lewis while Mt Rochfort on the West Coast commemorates John Rochfort. The two men were part of a close-knit network of surveyors and geologists who had travelled to New Zealand to make new lives for themselves. They socialised together and intermarried with other surveyors' families.

For example, Amelia Lewis' sister, Eleanor, married Arthur Dudley Dobson, whose own sister Mary Dobson married Julius von Haast (formerly a bookseller). Both men would be commemorated by having mountain passes named after them: Arthurs Pass and Haast Pass.

Of this group, the most colourful was John Rochfort.

Having paid 1000 to study (and qualify) as an engineer under Isambard Kingdom Brunel, one of the great British engineers of the 19th century, Rochfort travelled to New Zealand in 1850 at the age of 19.

One year later, Rochfort returned to Britain, detailing his adventures in a book published at London in 1853 (a reprint of which Peter Blomfield has also donated to the Edward Worth Library).

On his return to New Zealand in 1853, Rochfort set about exploring and surveying the West Coast of the South Island (he discovered gold there but continued to survey). He would later design the main trunk railway line and Raurimu spiral in the centre of the North Island.

During the reception to mark the donation of the Worth family Bible to the Dublin institution, Peter Blomfield gave a speech, part of which described Rochfort's thrill-seeking spirit:''This was an adventure of guns, Maori warriors, difficult terrain, impenetrable bush, punishing treks, raging rivers, terrible weather and starvation from which he barely survived but his fluency in Maori enabled him to win the tribes over.''

(It should be noted that Rochfort left Amelia and their children and took a Maori wife. Amelia, perhaps unsurprisingly, burned all his diaries, though not the Bible.)Given their research, the Blomfields think that Rochfort may have purchased the Bible in the 1870s as a gift for his wife, Amelia, who was known for her piety.

Equally, Amelia might well have purchased it herself: she was a redoubtable woman who ran a nursing home in Nelson for many years, ably bringing up her children, among whom was her daughter Josephine.

It was at this nursing home that Josephine met her future husband, Sidney Blomfield, who survived the storm that wrecked the Pleione off Waikanae Beach on March 19, 1888. After swimming ashore, Sidney nearly died of pneumonia. He subsequently travelled to England but returned to New Zealand in 1901 and married Josephine.

Yet questions remain:Did the Worth family Bible come to New Zealand after the death of Edward Worth Newenham in 1892 or before this date?

Given Amelia's connections and interests, she might well have purchased it herself from an emigrant to New Zealand either in the late 1890s or early years of the 20th century (she lived until 1942).

Or did her son-in-law Sidney Blomfield purchase it in London when he returned there, prior to his marriage to Josephine Rochfort in 1901? Or did the Newenham family send it out?''We have no way of knowing,'' Dr Boran writes.

''All we can say is that, thanks to the combined researches of Peter and Cleone Blomfield, who indefatigably tracked down previous owners of the Worth Bible, and thanks to their generous donation, the Worth family Bible has finally returned home.''