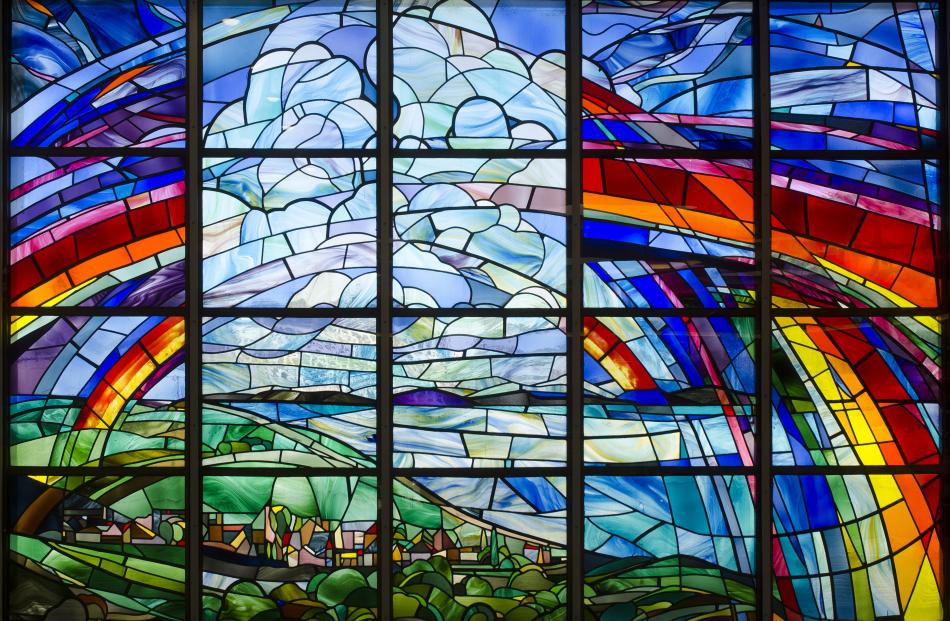 The Rainbow, designed by Shona McFarlane, executed by Roy Miller, leaded by Ken Thomson, 1976. This window, at 4m x 12m and weighing one tonne, is one of the largest coloured glass windows in New Zealand. Westfield Manukau City Shopping Mall. Photos:... 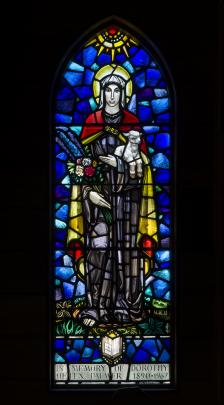 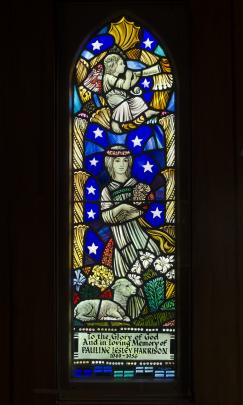 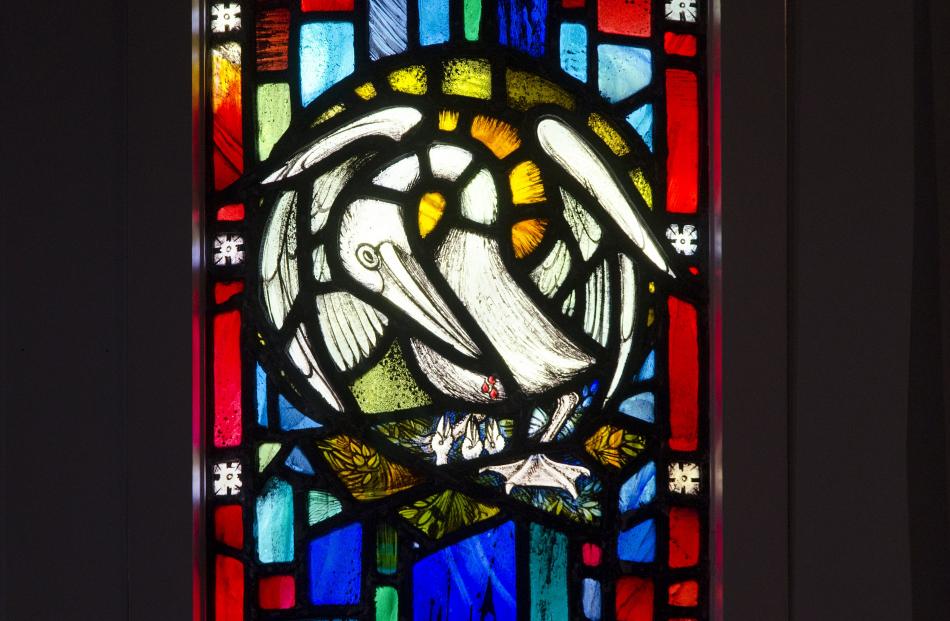 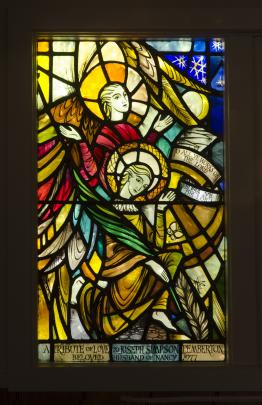 Amid the various refractions of memory, as shards of one scene are overlaid on another, Brian Miller recalls a childhood image of a stained-glass kiln out the back of Dunedin signwriting firm Miller Studios. He also pictures his Uncle Roy holding pieces of glass up against the light before cutting curves with the confidence of a master.

Thankfully, Roy Miller's work is a tangible thing. New Zealand's leading stained glass artist from the 1950s until his death in 1981, Miller produced more than 330 windows, in about 100 churches around New Zealand.

Brian details Miller's legacy in Capturing Light: Roy Miller - New Zealand Stained Glass Artist, which offers an insight not only into the life and work of his uncle but also provides a  history of the art of stained glass, both in New Zealand and internationally, as well as an overview of early Dunedin stained-glass artists.

• Looking at a stained glass window ...

In short, it's a celebration of artistic inspiration and the artisan skills required to, as the title says, capture light. The book also contains plenty of information on techniques for conserving historic stained glass artworks, all of which provides an inherent warning: that many such works are in danger of degradation.

Brian arrived at the idea of a book on his uncle several years ago, having been inspired by a lengthy conversation with Welshman Paul Hutchins, who joined Miller Studios in 1976 and worked with Roy for several years.

His original idea of writing a book to mark the 2013 centenary of Miller Studios (Miller Studios 100) soon expanded to a three-fold project that included Moments in Time: Ralph Miller - Artist, which focused on Brian's father (Roy's brother), who also worked in the family firm and was a talented artist, but died in 1956, aged 37.

Brian spent about three years between 2010 and 2016, researching, locating and photographing Roy Miller's stained-glass work. He also researched the lives of the designers who produced the artwork for Miller and the artists in early Dunedin who influenced him.

Capturing Light focuses mainly on ''ecclesiastical'' stained-glass windows found in churches. The author and photographer points out these are quite different from ''leadlight'' windows, although the words ''stained glass'' have become a generic term often used to cover both forms.

To clarify, ''leadlight'' normally refers to  domestic windows, involving small pieces of clear glass held together by lead, possibly containing some coloured or textured glass, and in fashion in New Zealand in the early 20th century.

Stained-glass windows are quite different. They start with a complex design, usually contain hand-made (antique) glass, and each piece of glass is painted or shaded to add features and depth. The process to make these windows is far more complex.

Stained-glass windows are usually the result of an interaction between two artists: a designer creates the overall design, the outlines, lead lines and details, as well as indicates the colours;  the glass artist then interprets the design by selecting suitable hand-blown coloured glass, paints the facial/clothing lines and, using a kiln, fires the paint into the glass.

The makers of stained-glass windows combine artistic creation with an understanding of science, Brian notes. Chemicals are added during the glass-making process to produce various colours and a skilled glass artist appreciates the ways in which glass scatters and bends light and how light can affect adjacent colours.

''They also need to be expert painters. And stained glass is painstaking work.''

• Roy Miller came from a family boasting a history of artists and artisans. His (and Ralph's) grandfather, Henry Miller, was a master coachbuilder whose hansom cabs won several championship awards at the Melbourne Exhibition. Their father, Oswell, established Dunedin signwriting firm O. G. Miller in 1913; it became Miller Studios in 1958, then in 2016 was rebranded Miller Creative Group.

Miller started working with his father as a signwriter after leaving primary school in the days when paint was mixed each morning from powder. Acid etching on glass was a large part of the work in those days and he spent many hours honing the technique to obtain various effects.

Robert Fraser, the first glass painter in New Zealand, who had a room next to O. G. Miller in Rattray St, offered to teach Roy the art of stained glass in 1942, as he was about to retire.

''Fraser was the key. Roy grew up as a young kid watching Fraser next door,'' Brian reflects, adding: ''He probably had about a year with Fraser, whose own son wasn't interested in carrying on the business.''

In 1943 O.G. Miller purchased Fraser's Art Glass Works and Roy started producing his own stained-glass windows, beginning with about one commission a year.

''He had artistic ability and after being trained by Fraser he carried on learning. He refined his techniques over the years. He was hard-working and methodical. And you need those attributes.

''I also think he realised early on that he couldn't design windows himself ... he worked with three key designers over the years and developed a shared trust.''

Miller's work can be broken down into a core trilogy of  collaborations: Firstly, he worked with Wellington artist Frederick Ellis, who produced designs from 1948-1961; then, in an effort to match competition from English studios, Miller used designs by Kenneth Bunton, who lived in England, from 1959-1969.

In 1969, Miller established a significant and long-lasting working relationship with designer Beverley Shore Bennett, the pair's initial collaboration resulting in the Holm window in Wellington Cathedral. Bennett produced designs for Miller Studios from 1969 until the studio closed in 1988.

(Beverley Shore Bennett, in 1974, was the first New Zealander to be made a Fellow of the British Society of Master Glass Painters; she was followed by Miller, in 1978.)

''Roy was a very quiet guy and would never blow his own trumpet. But I remember him being very proud of the work he was doing with Beverley Shore Bennett,'' Brian says.''

When the Church would react to one of Bennett's designs and say, `oh, this is too modern', Roy would back up her design. He was a conservative man, but he did move with his art.

''By the late 1970s, Miller Studios was responsible for 70% of  stained-glass church windows in New Zealand. By 1980, there was a two-year waiting list for its work.''

Bennett's designs were so striking, everyone wanted them. And Roy's painting skills just got better and better.

''Paul Hutchins, who worked with Roy for several years, said Roy was a world master.''

Miller retired in 1979 but came out of retirement in 1981 to work with Hutchins on three windows in Christchurch Cathedral. However, he died on August 31, 1981, aged 66, before the first window was completed.

Miller Studios closed its glass department in 1988 following a recession and consequent drop in orders from churches.Stained glass may be out of fashion in many art circles today, churches may be struggling to find parishioners and funds, but Brian Miller hopes his book will renew awareness of the art and encourage communities to enjoy, protect and conserve what he describes as a ''national treasure''.

''The book has many layers, from being a record of Roy's work to a record of other artists. There is also the aspect of conservation and preservation. Many windows need protecting.

"There were almost no records around New Zealand of who had created all these works. I got wondering, who were all these designers?. It took years to record family memories, to get photos of heirlooms and stuff, to get the stories of the artists behind the works.''

Using records from the Hocken Collections, Dunedin, the Alexander Turnbull Library in Wellington and Beverley Shore Bennett, Brian constructed a database of all the windows executed by Miller Studios. The list was extended as he travelled around New Zealand viewing each window.

''Luckily, when Roy died, the cartoons (the sketches on which a stained-glass design are based) were given to the Hocken Collections so I had this reference point of 350 objects to then go and visit the churches and places where the works exist. The whole project has evolved to the point that it is now quite a valuable reference.''

(A unique designer code - also in the book's captions - identifies each window and provides a direct link to available designs and cartoons in the Hocken Collections.)

''I found works in churches way out in the back-blocks, miles from anything. One church was used for one service a year. Others hadn't been opened in years.

"Most of the works reside in these small churches all around the country, especially in rich farming areas.''

Brian points out that the spread of stained-glass windows reads like an economic map of the country, as  windows were traditionally donated by the more wealthy families or farmers. In one church, the well-to-do families of the area had passed a church minute to the effect that ''only stained-glass windows made by Whitefriars in England could be used (needing overseas funds), thereby (due to the prohibitive cost), limiting window donations to the `proper gentry'''.

Dunedin has its own stained-glass dynamic.

Founded in 1848, and by 1860 a town with fewer than 2000 people, Dunedin grew rapidly following the discovery of gold in 1861. The city was transformed into the largest and wealthiest in the country and, from the late 19th century onwards, stained-glass windows became a feature of many large houses and mansions.

However, in the second half of the 20th century, as cities further north were prospering and pulling down old buildings as a consequence, Dunedin's economy was slowing down. Most of its old Victorian buildings were kept intact, along with their stained-glass windows.

The result: the city has the best collection of secular stained glass in the country, although many of those works reside within private dwellings.

Born in Dunedin, Brian Miller is a  writer, publisher and photographer.

In 1971, after completing a BSc (geology) at the University of Otago, he spent a year prospecting in the highlands of Papua New Guinea, followed by several years lecturing high school science trainees in Goroka, then organising educational publications in Port Moresby. He produced a photographic pictorial, The Highlands of Papua New Guinea, in 1983 before returning to New Zealand in 1984, spending 20 years running Dunedin business Tapui Children's Books. In recent years, he and his wife Diane have co-written Otago Central Rail Trail - easy guide and Macandrew Bay - a history of a community on the Otago Peninsula under their publishing name Lifelogs Ltd. Brian has also written the popular Digital Cameras: the easy way.