DIY - It's all online 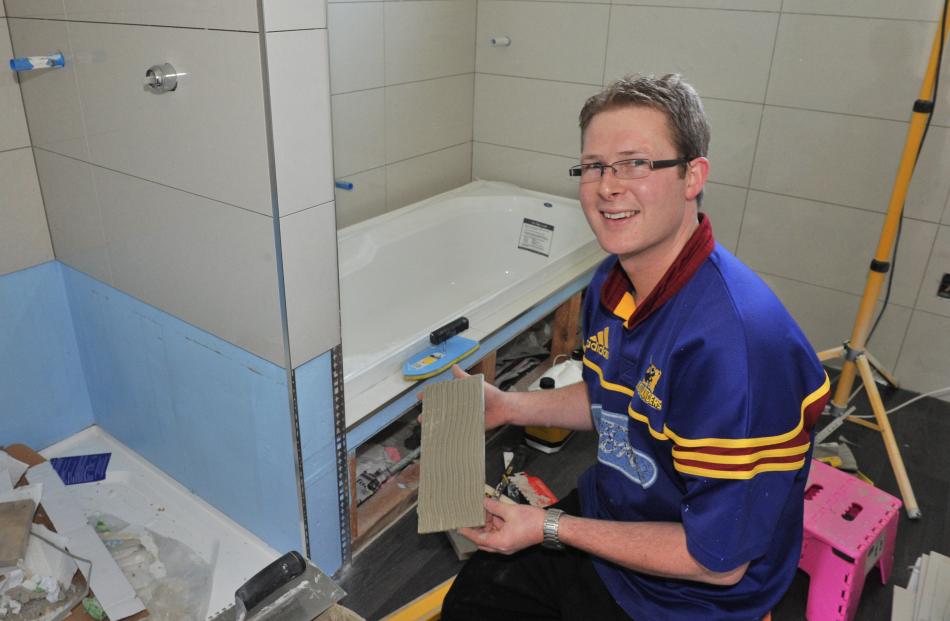 Steven Loughrey tiles the bathroom of his Mosgiel home. Photo by Linda Robertson

When Steven Loughrey wanted to tile his bathroom, he turned to YouTube.

The 34-year-old merchandising manager at Mitre 10 Mega Dunedin got a ''fancy'' level and some advice from the reps at work but a 40-minute YouTube clip filled in the gaps.

''There's a few skills you've got to learn but there's nothing like mucking it up and having to do it again to reinforce the principles,'' he says, laughing.

''I enjoy getting my hands dirty and seeing the result at the end. The bonus is saving money along the way.''

Loughrey, who has never worked in a trade, says his ''hands-on'' father has been a help. But even if he wasn't, advice these days comes in any format people like to learn in, from how-to brochures to in-store television clips.

He also turned to YouTube to learn how to work a spray gun before painting the inside of his newly built house.

Loughrey has plastered the interior, installed laundry cabinets and built wardrobes. Before that, he and his wife did up a series of older houses, ripping down walls, insulating and putting up plasterboard.

''There's heaps you can do. It's just having the will to do it and somehow finding the time. It's a big draw on your weekends but it's something I like doing.

''With some things, I'd just be too slow doing them so it's faster and easier to pay someone to get it done. But then I don't value it quite the same.''

Mark Caldwell, who works in software licensing at the University of Otago, has been landscaping, painting and plastering houses for years.

He and his partner divide their time between two properties and have two rentals so there is always something to do, from laying paving to renewing decking.

For the 52-year-old, the best aspects of DIY are the opportunity to do something completely different from what he does during the day and the satisfaction he gets from completing a project.

Mr Caldwell has sought advice from friends and learned from experience, but says building a garden shed in technical training classes at high school is where he learned many of his skills.

Back in his teens, when television was ''not as captivating'' and homes did not have computers, he enjoyed tinkering with cars. Today, he says, there are more distractions and people are less inclined to get outside. The move to the cities has also had an effect on home maintenance skills.

''Materials are changing and unless you live in an old villa that requires constant maintenance, you're never going to have a need to learn how to do [it].''