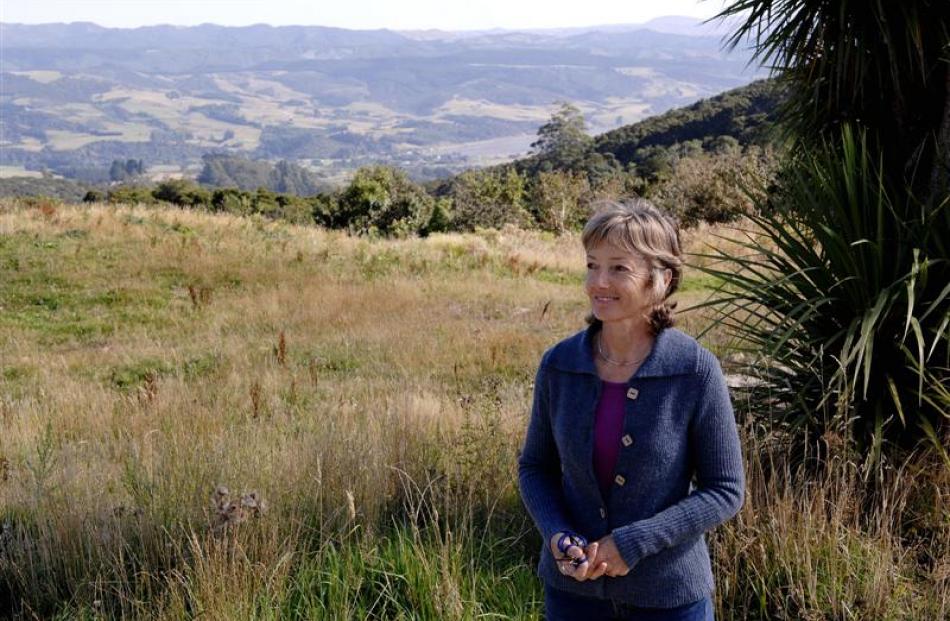 Chris Baillie, General Manager, in front of the site of the proposed visitor and education centre at the Orokonui Ecosanctuary. Photos by Linda Robertson. 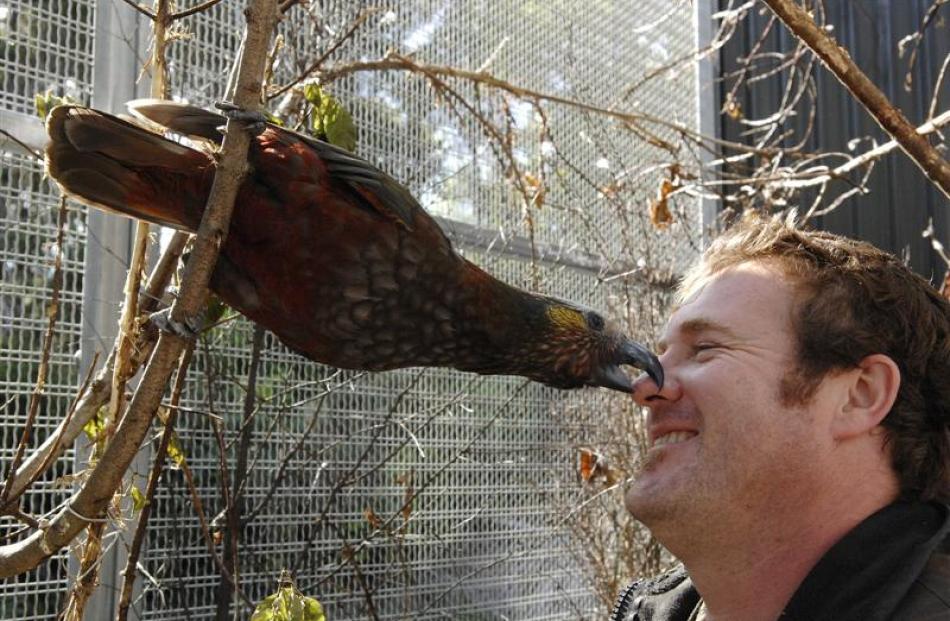 Elton Smith, Operations Manager, with one of the kaka in the aviary at the Orokonui Ecosanctuary. The birds will be released in the spring 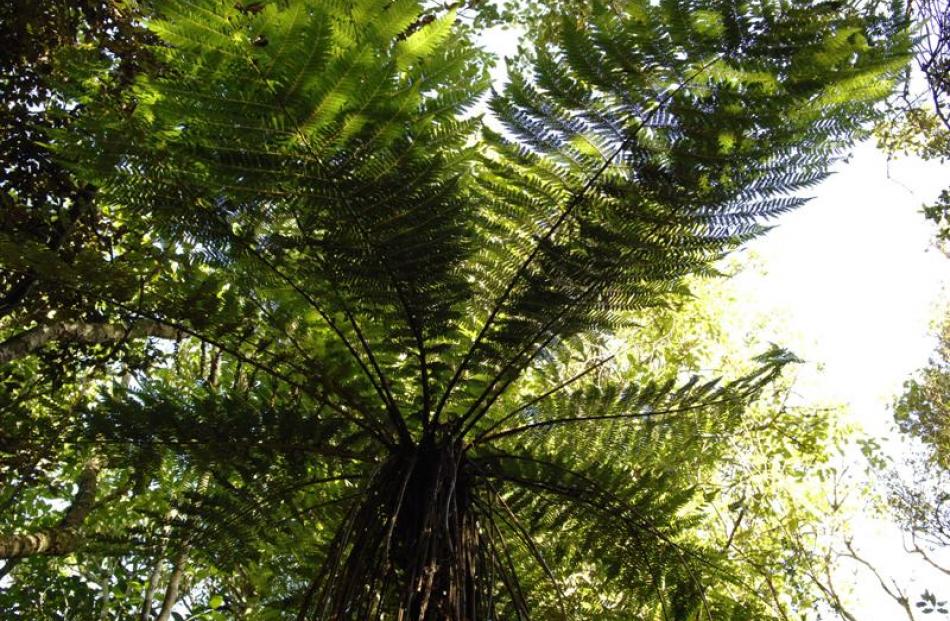 A Ponga fern at the Orokonui Ecosanctuary. 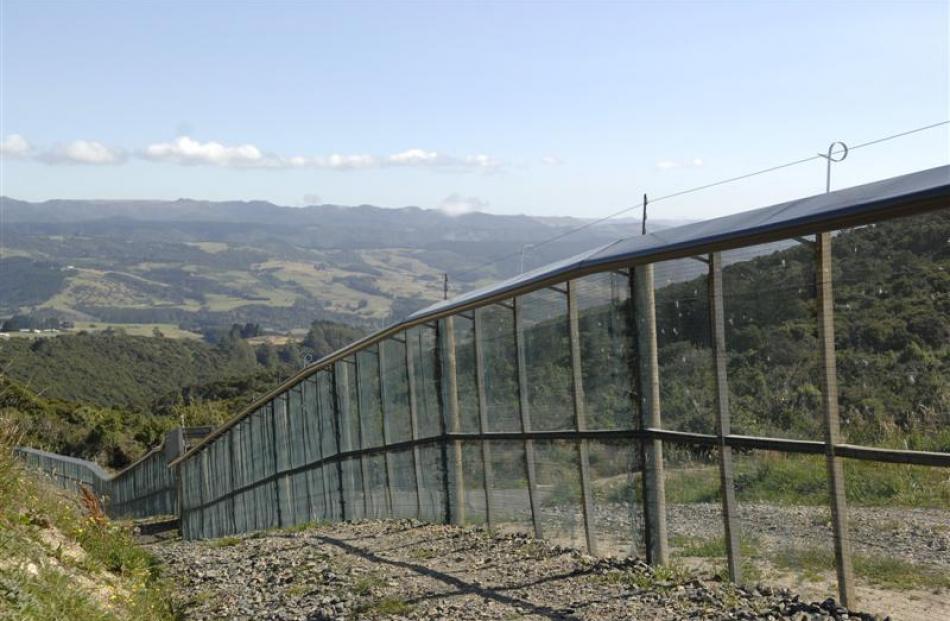 The fence - capable of keeping out everything down to baby mice. 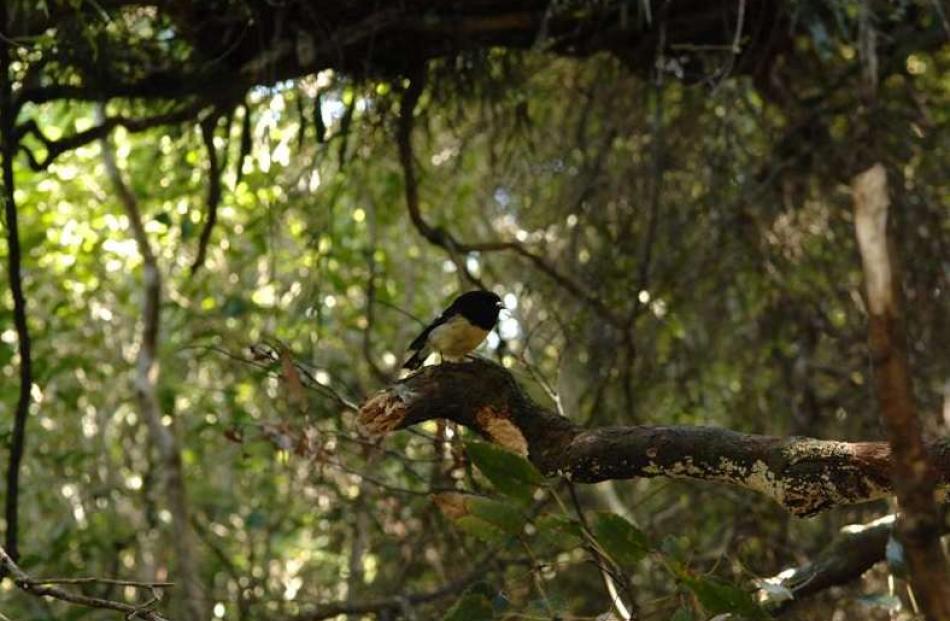 This New Zealand tomtit has the safest perch in Otago.

Here at last is a place for birds to touch down safely - the only place in Otago for centuries guaranteed free of guns and spears or pests and pets. Mark Price reports on the Orokonui ecosanctuary.

Patches of scrub. A scruffy expanse of long grass. Low bush in the distance. A dirt track and a tall, mesh fence. The first view of the Orokonui ecosanctuary from the road falls well short of a picture-postcard tourist installation.

But consider the ecosanctuary from the bird's eye point of view.

Here, at last, is a place to touch down safely - the only place in Otago for centuries guaranteed free of guns and spears or pests and pets.

Birds can roost near the ground without the fear of being killed by a stoat, a ferret or a weasel.
They can leave their eggs in a tree stump safe from rats and hedgehogs.

And possums, mice and goats are no longer chewing through their food supply.

‘‘They seem to know where they are safe.''

He says normally it is ‘‘unheard of'' for New Zealand native birds to roost near the ground.

‘‘But there is something about sanctuaries. Once they are established and stay predator-free, the birds tend to revert [to their natural behaviour].''

The Orokonui ecosanctuary is a 307ha slab of land north of Dunedin overlooking Blueskin Bay and in the hands of the Otago Natural History Trust.

It contains remnants of a distinctive Dunedin-style ‘‘cloud forest'' of podocarps and kaikawaka [New Zealand cedar] that have survived logging, farming and the spread of pests and weeds.

To begin turning back the clock to ‘‘prehuman'' times, the trust has removed more than 3000 exotic pines and macrocarpas, cleared gorse and broom and created wetlands.

It has planted shrubs, trees and grasses indigenous to the cloud forest that hangs on to Dunedin hilltops by feeding on east coast fogs.

It has poisoned 800 possums and every last stoat, weasel, ferret, rat, cat and mouse.

The only remaining pests are one young goat, a few hedgehogs and some hares, and when they are gone, in the next few weeks, the ecosanctuary will be declared pest-free.

Gaining that status will be an occasion fit for Champagne. But the real test of the Orokonui ecosanctuary will be its ability to stay pest-free behind its 10km, $2.2 million mesh fence, which manager Chris Baillie points out is designed to keep out every predatory mammal down to a baby mouse.

‘‘People say, well what's wrong with mice? But mice do eat little eggs . . . so we have a fence that can keep out all introduced mammals.''

Every second day, volunteers spend up to four hours walking the new road around the ecosanctuary's circumference looking for damage to the fence or the ground on which it stands. A simple crack in the soil in a dry spell of weather could provide an opening.

‘‘Some of the sections are quite steep and because they are looking at [the fence] quite carefully, they can't rush it. They go out in all weather. They are very committed.''

A hundred volunteers give on average 800 hours a month of their time, energy and skill.

Tony Pullar is one of them. His specialty is the raising of the kaka - the ‘‘very vocal, very visual'' native parrot - which was common 130 years ago.

‘‘They used to flock and migrate up and down the east coast. One book cites an eyewitness account of a flock of kaka that took 10 minutes to go past.''

The ecosanctuary has four juvenile kaka in an aviary ready to release in the spring. There is no guarantee that they will stay.

Baillie: ‘‘We'll retain the two adult birds in one side of the aviary so that will be an aural anchor. Their cries will call them back.''

The young kaka will retain free access to the aviary enclosure and supplementary feeding will be provided.

‘‘We'll let them go and we'll hold our fingers crossed.''

The ecosanctuary has been possum-free for five months and Ms Baillie says their absence has already made a difference.

‘‘You can see the vegetation increasing. The flowering trees are prolific. Certain trees and plants that possums like are really going crazy now.''

And that will benefit the ecosanctuary's populations of riflemen, tomtits, grey warblers, brown creepers, wood pigeons, tuis, bellbirds and fantails.

Waitati ornithologist Derek Onley is in charge of monitoring bird numbers at more than 20 stations inside and outside the fence.

So far, they have found no marked difference but Mr Onley believes that is because birds everywhere have thrived in this summer's good weather.

He expects the difference to begin showing up after the winter.

There are plans to add more species to the ecosanctuary, with kiwi near the top of the list.

It is 136 years since kiwi have lived in Dunedin bush. The skins of the last two are part of the Otago Museum's collection. They were killed by dogs at Burkes in 1872 and the dogs' owner took them to the museum.

‘‘They've been out to have a look at the soil, the climate and rainfall. All those sorts of things are important.''

And not forgetting jewelled gecko, Duvaucel's gecko, short-tailed and long-tailed bats and tuatara.

‘‘We've started negotiating with Doc and the Ngati Koata, who are the guardians of tuatara on Stephens Island, where they would probably come from. It's a long negotiation process but we've started . . .''

She acknowledges that a new ecosanctuary must ‘‘establish its credentials'' with those working to save endangered species.

‘‘What we are doing here is creating a healthy ecosystem, a natural ecosystem. It's not a zoo so there won't be things in cages . . . it will be people coming through and seeing nature on its own terms.''

While she sees the ecosanctuary as ‘‘a community managed thing'' with a ‘‘strong sense of ownership by the community'', there has not been unanimous support.

She says ‘‘some developers'' who have had resource consents for houses in the area turned down because of their ‘‘visual impact'' have argued that for the same reason the ecosanctuary visitor centre should be declined.

And she says while near neighbours have been welcoming, some in the area think having an ecosanctuary move in will decrease the value of their property.

‘‘I don't think they are correct but that's a view that they hold.''

Whatever their views, neighbours certainly face a period of adjustment. They will need to get used to the night noises of kiwi, the swelling orchestra of bellbirds and tuis and the endless twittering of fantails.

They will also, no doubt, need to get used to the growl of tourist buses and streams of cars using their narrow country roads.

There seems little doubt that as the ecosanctuary begins to breathe new life into Dunedin's cloud forest, the quiet times for Orokonui are almost over.


Among the podocarps . . . The site for a viewing platform at the Orokonui ecosanctuary. Inset: Safe from predators . . .