The Vogel Street Party is a creative interweaving of traditions in an urban space.
Dunedin has enormous potential on which it can build, says the head of a new organisation that promotes traditional architecture and urbanism. Kim Dungey reports.

Urban designer and researcher Crystal Filep believes Dunedin is one of the world’s great small cities. 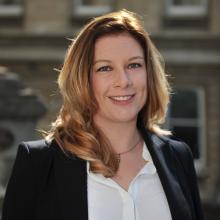 Crystal Filep.
She recently launched the New Zealand chapter of the International Network for Traditional Building, Architecture and Urbanism (INTBAU), a group she says will enable Dunedin to learn from what comparable cities have done and to share its own successes with an international audience.

When the American first moved to Dunedin five years ago, she was impressed by the city’s "beautiful" heritage architecture, compact, walkable size, "incredible" harbour, access to nature and community spirit.

"It’s a very inclusive, warm, humble place and that’s worth protecting as it develops in the future."

While doing a PhD at the University of Otago, Ms Filep developed concept plans for the city’s gasworks site, Caversham’s Station Park reserve and the Moana Pool foyer.

Now the organisation she chairs is planning a public workshop to take stock of the city’s heritage, identify opportunities that might have been overlooked and create a "map of opportunities".

"Perhaps [people] know of an old building they really love and would like to see done up or perhaps they see great value in the Octagon being pedestranised or in something else," she said.

"Those opportunities will be documented and offered as a resource that council may choose to use in its processes, such as the urban design of our city centre."

This year’s Vogel Street Party and Mauri Ora whare nikau — a traditional Maori dwelling built at Puatahi Marae, Kaipara, in 2006 — are good examples of the principles championed by the New Zealand chapter of the International Network for Traditional Building, Architecture and Urbanism.
The event will be held during next week’s Powerhouse Festival, a mix of tours, presentations and performances organised by the Southern Heritage Trust to celebrate Dunedin’s industrial heritage.

While the wider INTBAU network promotes traditional building, the New Zealand chapter — an umbrella under which groups already working in building, architecture and urbanism can collaborate — is taking a slightly different approach.

In older countries, there was a long, well-established tradition to build on and not as much "wiggle room" for reinventing that tradition, Ms Filep said.

Here, the group was encouraging people to draw on multiple traditions and to use them as a foundation from which to move forward.

"It’s not about being trapped in the past ... A good example is what [former Dunedin City Council heritage planner] Glen Hazleton has done with the warehouse precinct, where you’ve got old buildings with creative new uses and a livening-up of the urban area.

"The point is to avoid development that is contextually-insensitive."

Urban spaces also needed to be based on community research so they were meaningful to people and they wanted to spend time in them.

Internationally, the United Nations has just released a 20-year vision which will guide the sustainable development of towns and cities around the world, addressing issues such as adequate housing and the safety of those living in urban areas.

More than half of the world’s population is now made up of urban dwellers and by 2050, two-thirds of the global population is expected to live in cities.

In New Zealand, 86.2% of the population lives in urban areas.

In 1906, the urban-rural split was almost 50/50.While this unprecedented urban growth comes with challenges, cities were starting to be seen not as problematic but as "opportunities for innovation, cultural stimulation and solving problems to do with inequality", Ms Filep said.

The new urban agenda prioritised public space, which she described as the "frontline" for people’s everyday lives and their interactions with each other, and highlighted what so-called "secondary", or medium-sized, cities could offer.

In Dunedin, it was important to enhance what was already good and to seize on opportunities that existed, she said.

That might mean ensuring that housing remained relatively affordable by having policies that discouraged too much speculative development or building different-sized apartments to suit all budgets.

There also needed to be equal access to different transport options.

Even if cities were not growing rapidly, it was essential to invest in them and for them to provide the kind of lifestyles that people wanted.

"In Dunedin I’ve seen a lot of that happen in the past three or four years, even small changes. There’s a nice term called ‘incremental urbanism’. A building gets a facelift or a sidewalk gets redone or new trees are planted. It’s almost as if you’ve rearranged your living room a little bit. You feel a sense of ownership over it and there’s a nice sense of freshness to it."

• Ms Filep will give a short talk about INTBAU NZ at a pecha kucha event at the Athenaeum in Moray Pl on Thursday, October 27, at 6.30pm (entrance via the alleyway opposite First Church).

• The community workshop to create Dunedin’s ‘‘map of opportunities’’ will be held in the Fringe Festival office, 26 Princes St, on Saturday, October 29, from 1pm to 3.30pm.

• The Southern Heritage Trust’s Powerhouse Festival celebrates the technology, buildings and people that powered Dunedin as New Zealand’s first industrial city and runs from Wednesday to Sunday next week. It includes a pecha kucha event with short presentations by 12 speakers, a steampunk version of Alice in Wonderland, a bus tour of Port Chalmers’ engineering heritage and Emeritus Prof Helen Leach speaking on changes in New Zealand kitchens. There will also be a display of Kiwi-designed and manufactured computers, games and appliances, a mad hatter’s tea party and a short piece of documentary theatre based on the experiences of Donaghy’s ropewalk workers.