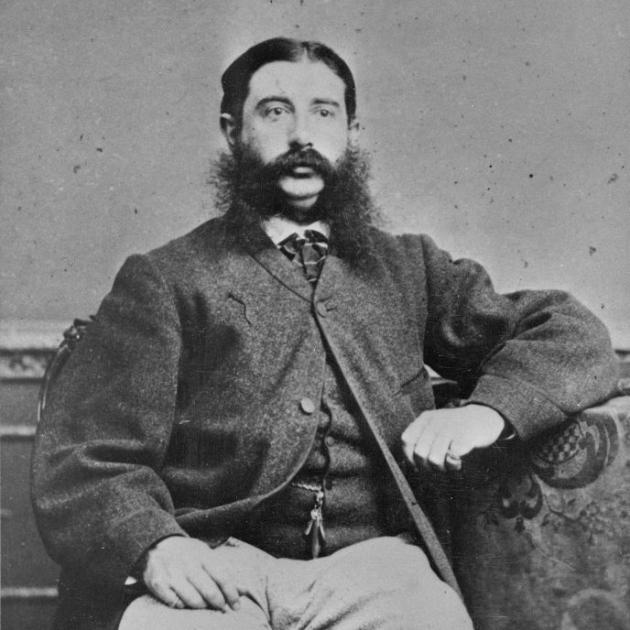 Julius Vogel (1835-99), playwright and novelist, is much better known as a big-spending, think-big prime minister. He might have been a shrewd, at times divisive, politician, but at heart he was a writer and by profession a journalist.

He founded the Otago Daily Times with W. H. Cutten, and hired Benjamin Farjeon, another Jew from London, whom he might have known from the Australian goldfields, as his manager.

Vogel always nurtured his ambition as a writer.

Before entering politics, soon after his arrival in New Zealand, he tried his hand as a playwright, dramatising Lady Audley's Secret, by Mary Elizabeth Braddon, one of the most popular English novels of its day.

After his defeat in politics, Vogel retired and moved back to London.

Severely handicapped by gout and deafness, he spent the final 11 years of his life in a wheelchair.

There was an international vogue for futuristic stories, and Vogel had hoped to make money from his book.

In this he was disappointed - he earned a mere £50 - but he found an outlet in his writing for his political ideas and his vivid imagination.

In the world of the future, poverty would disappear.

"The writer has a strong conviction that every human being is entitled to a sufficiency of food and clothing and to decent lodging whether or not he or she is willing to or capable of work. ... An incalculable increase of wealth, position, and authority would accompany an ameliorated condition of the proletariat, so that the scope of ambition would be proportionately enlarged.''

And he posed the question: "Should human knowledge, human wants, and human skill continue to advance to an extent to which no limit could be put, or should the survival of the fittest and strongest be fought out in a period of anarchy?''

The British dominions had been consolidated into the empire of United Britain and women took over the prominent leadership roles.

"It has, in fact, come to be accepted that the bodily power is greater in man, and the mental power larger in woman. So to speak, woman has become the guiding, man the executive, force of the world. Progress has necessarily become greater because it is found that women bring to the aid of more subtle intellectual capabilities faculties of imagination that are the necessary adjuncts of improvement.''

In the story, a young woman, Hilda Fitzherbert, the member of Parliament for Dunedin in the imperial government, becomes a most influential politician, an adviser of the Emperor.

An eminent Australian soldier, Lord Reginald Paramatta, is in love with her, but his love is not reciprocated, and to have her in his power he plots to overthrow the empire.

The plot is foiled by the Emperor's spymaster, "a very remarkable man. He was on his mother's side of an ancient Jewish family, possessing innumerable branches all over the world''.

With Semitic features, he was "a tall, slender man, apparently of about thirty-five years of age. His complexion was very dark; and his silky, curly hair was almost of raven blackness. His features were small and regular, and of that sad but intellectual type common to some of the pure-bred Asiatic races.''

Mockingly, this saviour of the empire describes himself as coming "of a race of money-lenders''.

Vogel had a visionary imagination. He wrote about air cruisers, driven by engines much like jet engines, the inventor of which was a young Jewish woman, niece of the spymaster. He envisages large irrigation schemes in the South Island, electricity as the prime source of domestic light and heat, hydro-electricity as a major source of power.

In political developments, he foresaw a global federation of financial interests that maintained world peace, taxation as the great divisive issue threatening to break up the empire, and the resolution of the issue of Irish Home Rule.

There is no limit to Vogel's seemingly far-fetched ideas.

The Southland Times, reviewing Vogel's book, said: "In Anno Domini 2000, it is easy to detect the hand of a beginner. The plot, if plot it can be called, is not very ingenious, the dialogue is not very brilliant and the characterisation is decidedly poor. The whole story is moreover ridiculously improbable.''

What is interesting is that Vogel, who was reminded of his Jewish identity throughout his life, whom his political opponents described as the "wandering Jew'', whose newspaper, the Otago Daily Times, was referred to as "that despicable literary dish clout'', "the Jew's Harp'', created a positive image of Jewishness in one of the leading characters of his work of fantasy.

A service this week at London's United Synagogue marked the life of Sir Julius Vogel as "a leading pioneer, advocate of universal suffrage and good community relations''.

The service was led by Rabbi Jeremy Lawrence, Kinloss Synagogue (former Senior Rabbi of Auckland) and a haka was led by Ngati Ranana Maori Club.

It was advertised as a 180th-anniversary commemoration service of Sir Julius' birth and the 140th anniversary of his premiership, though that was a fairly liberal interpretation of the dates involved.