The cast of Down on the Farm.
A rare treasure helps tell the story of our first "talkie", writes Anna Blackman.

Items from New Zealand's first "talkie" motion picture, a 1934 romantic comedy called Down on the Farm, were recently donated to the Hocken by Phil Burt, of Invercargill.

The items belonged to his aunt, Gwenda Burt, and relate to her experiences on the film.

They include a memoir of performing in Down on the Farm, an album of publicity photographs for the film and some other memorabilia of her life. 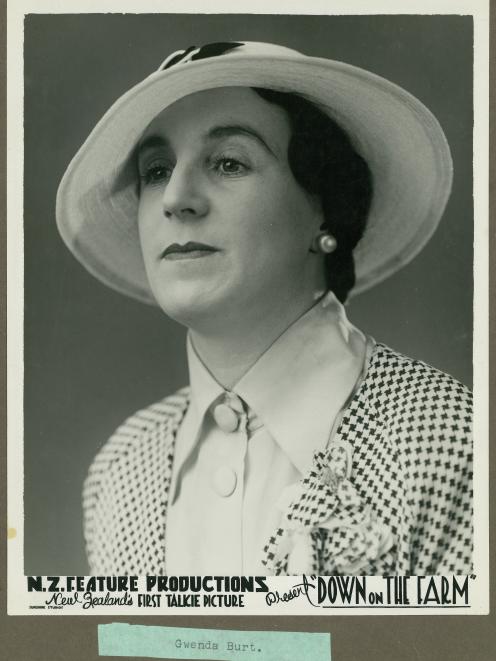 Gwenda Burt was given a leading role of Miss Sophia Uprington, an English spinster aunt.
Neither the film nor the script survive in full as far as is known, so Gwenda's memoir of performing in the movie is New Zealand film history treasure. Nga Taonga Sound and Vision hold some short out-takes of the film that are viewable from their website.

The film was produced by Lee Hill and Stewart Pitt and sound was recorded by Jack Welsh, a pioneer in film sound recording in NZ.

Gwenda's typewritten memoir begins with the excitement of successfully applying to audition. She was required to do a short camera test, sing unaccompanied, improvise some dialogue and provide photos.

Gwenda was given a leading role of Miss Sophia Urpington, an English spinster aunt. The plot was a story of forbidden love between the offspring of two feuding farmers. Most of the filming was done in Outram and at Ravenscliffe (a substantial Woodside homestead now demolished). A double wedding scene was shot at First Church. A highlight for about 500 locals who turned up to watch was a wrestling match, "The Cockney Killer vs. the Woodside Terror".

Filming was mostly done at weekends as most of the cast had other work. All scenes were shot outside, so progress was dependent on the weather and light.

Clearly a lively, intelligent and stylish personality, Gwenda was not hesitant to give things a go!

In one scene, Gwenda was asked to drive a car, and although she knew how to start and stop a car she did not admit to the crew she had never previously driven! To her credit, the scene was filmed without incident. The following scene featured Gwenda getting out of the car with an air cushion stuck to her rear, which caused much merriment among the Outram onlookers.

Another day it was realised that the scriptwriter had neglected to write dialogue for a particular scene. Gwenda was asked to write it on the spot, which she did with the help of pencil and paper and the side of a lorry to lean on. 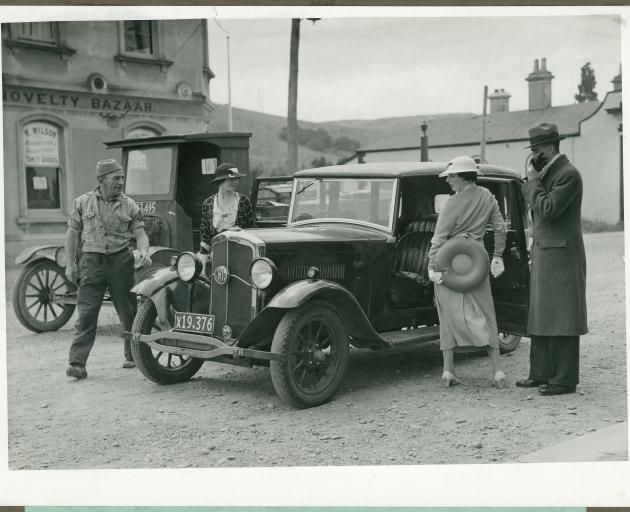 A scene from Down on the Farm, in which Gwenda Burt, as Miss Sophia Uprington, gets out of a car with an air cushion still attached, which caused much merriment among Outram onlookers.
On another occasion she was waiting with male cast members outside the City Hotel for the car to take them to Woodside. Gwenda was dared to accompany the men into the hotel bar; a place that women would normally never enter in that era. She took satisfaction in the looks of horror from the male bar patrons already drinking when a woman entered their domain. She enjoyed her beer!

The film was not big-budget, and Gwenda supplied her own wardrobe for the film with the exception of a suit (a smart duck egg blue and black with white accessories) from Arthur Barnett's, which she was allowed to keep. None of the cast were paid for their work.

The film was launched with a Hollywood style premiere on May 1, 1935 at the Empire De Luxe (later the St James, now Rialto) in Dunedin; the Governor-General and his wife, and Dunedin Mayor the Rev. E. T. Cox and his wife attended.

On release, the film was popular locally (15,000 people saw it in the first two weeks in Dunedin), probably because people enjoyed seeing familiar faces and places on screen, but it did less well further afield. A rather unflattering review from England suggested that colonials should stick to exporting mutton.

Gwenda's own assessment was that while she thought the film was good it was faulty in parts, but taking into consideration that it was essentially an amateur effort, it was very creditable. She certainly very much enjoyed taking part.

Gwenda was the only daughter of Tom and Ana (Christiana Isabella) Burt (nee Melville). She lived in William St, worked at Charles Begg & Co. Ltd music store, and was also for a time hostess at Larnach's Castle.

As a school girl Gwenda won prizes at King Edward Technical High School for singing. By the 1930s she was a well-known singer and actor in Dunedin productions, particularly those of the Dunedin Operatic and Theatrical Society.

During the mid-1930s she frequently performed at the Vedic Cafe, her voice was noted as a contralto, and she was often accompanied by the Vedic Trio performing chamber music.

The Vedic Cafe on Princes St hosted many social events, art displays and musical performances during the 1930s.