Oh, to be top dog again

Russell Peek won his first open dog trial with a heading dog called Speck at Millers Flat in the early 1970s, and has never looked back. Sally Rae reports. 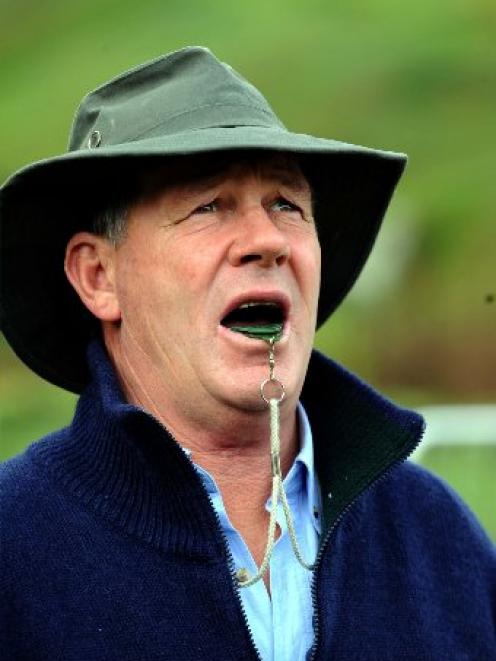 Russell Peek. Photo by Stephen Jaquiery.
Russell Peek's dog trialling career may have spanned more than 40 years, but the desire to win is as strong as ever.

Mr Peek (58) has won one New Zealand championship and four island titles and his ambition is to win another national title.

''I've been that close so many times. It just hasn't happened yet,'' he said.

There are a few likely contenders in the kennels at his Dunback home.

A huntaway called Chuck, bought last year, has ''certainly got a good show'' if he can get him to reach his potential.

Another huntaway, 8-year-old Task, who won the zigzag hunt at the South Island championships last year, was still going well, and heading dog Jim, third in the long head at the New Zealand championships this year, has a
''hell of a lot of potential''.

Little has changed since the first trial well over 100 years ago - it is still a test of practical shepherding and an important social occasion, too.

At local club trials, the tin shed booth hums with life, the women rustle up meals in the cookshop and a fair number of tall tales are told as old mates catch up.

Mr Peek grew up with animals and dogs.

His family shifted from Roxburgh, where his father was a carpenter, to a farm at Hillend, in South Otago, in 1958, and he was allowed a day off school to attend the local dog trials.

His father, Harold, liked dogs but did not have them until he went farming.

He bought his son a good dog, called Roy, because he wanted the dog to teach him.

Mr Peek gradually got more dogs of his own and became more involved with trialling, winning his first open trial with heading dog Speck at Millers Flat in the early 1970s.

The class was judged by Maniototo identity the late Chappie Hore, and winning was a great thrill.

His first big success was at the North Island and New Zealand championships at Whangara, near Gisborne, in 1985, with a huntaway called Mace.

Mace was just 19 months old when he was fifth in the North Island straight hunt and fourth in the New Zealand championship.

He then won a South Island championship at Amuri in 1989 but, sadly, later died of an enlarged heart.

About the same time, he had another huntaway, called Chap, who won a North Island championship in 1990.

The following year, Chap won the New Zealand straight hunt championship at Mangamingi and was second in the North Island championship.

For one of Chap's runs, it was pouring with rain and Mr Peek could hardly see.

''When I finished that run, I didn't really know what it was like."

But in the run that clinched the title, he knew he had done well.

''The crowd knew; you could hear them all hooting and yelling.''

It was a big party that night.

Fellow triallist and friend Lloyd Smith had won a North Island championship with Birch in the zigzag hunt.

With virtually no sleep, Mr Peek had to turn out the next morning to compete in the yarding final with Rene.

That was probably the one time he let his dog down, he said.

Mr Peek moved from Hillend in 1989, farming at Wendon Valley for three years, then Middlemarch for eight years before moving to Dunback 10 years ago.

He and wife Lynda now also own motels at Mosgiel and live on a 40ha property.

He does casual work, as well as working on his own farm, ''which suits me just fine''.

In fact, he said, he now probably had more ''dog work'' if he wanted it than he did when he was farming on his own.

Trialling was a great sport and fitted in with farm work.

Trial dogs had to do the work first, he said.

Asked what made a top trial dog, he said a good-natured dog ''with something upstairs''.

As in any sport, a top triallist needed determination.

Mr Peek, who never goes out to get second, does not go to as many trials as he used to and does not venture much out of the North Otago centre.

He is president of the Waihemo Collie Club, which hosted the North Otago centre championships at Dunback this year, and his wife is the secretary.

He says the club's trials are always well supported and it is a good, strong club that enjoys the support of the community.

Mr Peek particularly loves training huntaways, saying they have to have the confidence not to look at their master or mistress as they complete the run.

He does not like dogs working under duress, saying they never find the level of their ability if they are under too much pressure, and he likes his dogs to like him.

''I like to think my huntaways' tails are wagging.

He enjoys training a good pup, saying the training is very basic, ''providing you be consistent''.

Mr Peek has judged at many trials, although not so much now - ''I feel I've done my turn''.

Judging at that level was ''quite a pressure job'', as just about every competitor watching was a judge themselves.

In the end, he named Chap and Mace, ''tremendous dogs'' who both died from enlarged hearts.

While Chap won a New Zealand championship, he had Mace while he was still an inexperienced triallist and had yet still won an island title.

''I think if he had lived on, he probably would have won a New Zealand.''

Mr Peek has no plans to retire.

''When you get to 60, a lot of people say you get over the hill, you're not going to keep up with your dogs.

Long head: The competitor starts the dog from a marked ring and the dog heads three sheep on a hill 300m to 600m away.
The dog then pulls them into the ring in as straight a line as possible and holds them stationary to the judge's satisfaction, all within a time limit of between 10 and 15 minutes.

Short head and yard: The competitor starts the dog from a marked quad and heads three sheep between 150m and 300m away and pulls them to the quad. nstead of holding them stationary as in the long head, the competitor and the dog move them along a 20m-wide drive way, which is marked by a series of pegs, through a pair of hurdles and then along between a second drive way.
At this point, the competitor goes to the yard, opens the gate and stays there while commanding the dog to yard the sheep. The run is completed when the gate is shut on the sheep, all to the judge's satisfaction and within a time limit of 10 to 15 minutes.

Zigzag hunt: The competitor starts the dog from a marked quad. Three sheep are liberated in front of them and the dog then uses his bark to hunt them up a hill for about 200m to 300m.
The course is set between three pairs of markers which are 20m apart. These markers are offset to test the dog's ability to slew sheep (force a change of direction).
The run is completed when the sheep pass between the top set of markers, to the judge's satisfaction and within the given time limit.

Straight hunt: This event is the same as the zigzag hunt except that there is only one set of markers set 20m apart at the top of the course.
The dog aims to hunt the sheep from the starting point, in as straight a line as possible, through the top set of markers.
The huntaways's role is to shift sheep with a steady flow of noise directed at the sheep. It should not turn back towards the competitor or, in any way, take its attention off the sheep. Any hunt run should be controlled and progressive, demonstrating the dog's ability to ''hunt''.

Cast: The careful outrun of a dog that is going to gather some animals.

Command: An instruction given to a dog. May be spoken or whistled.

Eye: The steady and concentrated gaze with which a heading dog establishes psychological control over the animals it is working.

Face up: This refers to the need for a dog to watch the animals it is working and not look back at its handler.

Lift: The careful approach a dog makes after it has completed a cast around the stock. This is when the dog introduces itself to those animals and encourages them to start moving in the required direction.

Pull: The action of bringing animals that have been headed back to the shepherd.

Wayleggo: A command that calls the dog back to the shepherd.

- Source: I Am A Working Dog - Natural Training for Sheepdogs, by Michael Oliver and Tony Sheild