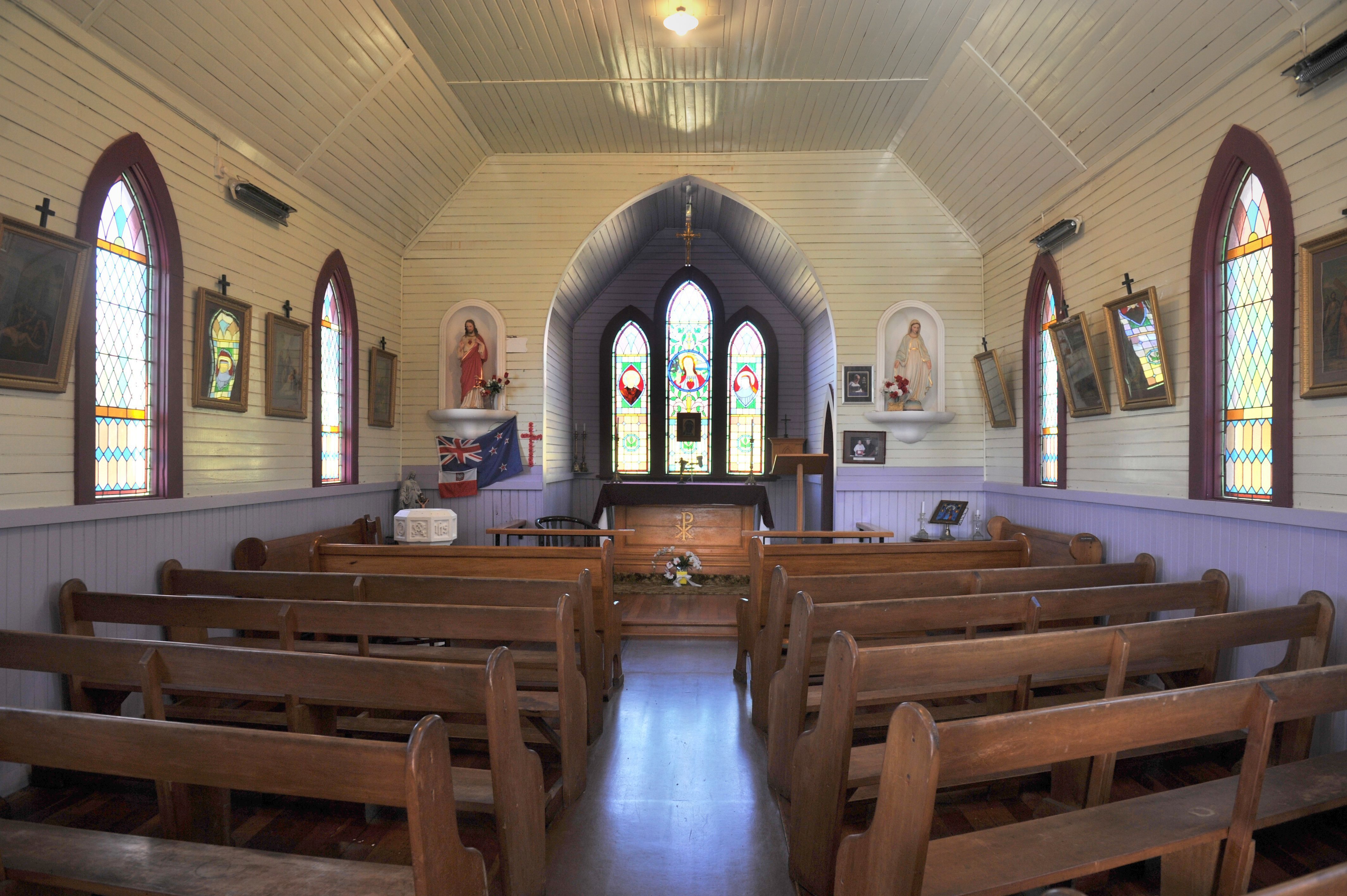 The Polish church in Broad Bay. PHOTOS: CHRISTINE O’CONNOR
In the years following the arrival of Europeans in Aotearoa, immigrants began to fill the southern islands from all corners of the globe. Among them were the Poles. Now, as an important anniversary looms, their story is being remembered, Finlay Forsyth writes.

In Broad Bay, just off Portobello Rd, sits a little gem. A picture perfect church that, for the past 73 years, has been content to play host to views across the harbour.

But there is more to the church than meets the eye. It was in fact built earlier, in 1899, 45km away in Waihola. Although now known as Mary Queen of Peace Church, its original name was St Hyacinth’s, named for a Polish missionary. And perhaps most importantly, it is a rare monument to Polish migration to Otago.

On December 6, 1872 — 150 years ago next year — the Palmerston sailed into Port Chalmers after a voyage of more than four months. In a recounting of the journey, passenger Christen Christensen told of a near shipwreck and celebrations of the captain’s birthday, at which there was plenty of “dancing and also some sing song”.

The Palmerston arrived as part of the “Great Public Works Policy”, initiated by New Zealand premier Julius Vogel three years prior, to speed the building of roads, telegraph lines and railways. The 228 on board, a mix of Norwegians, Danes and Poles, would be part of a twofold increase in the population of Otago in the 20 years after the scheme was implemented.

All those on board had their own reasons for departing their homeland for a country of which they knew little. For many of the 108 Poles, whose country had been partitioned in 1795, their reasons were likely linked to Germanisation policies introduced as part of the “Kulturkampf” conflict.

The “Kulturkampf” measures included the suppression of the Polish language, including in Catholic church services, the closure of Polish schools, and the removal of Polish clergy. For those who chose to flee, it would have felt as though their Polish identity, their language and religion, were in danger.

Another incentive for leaving Poland was the fear of conscription into the Prussian Army, for which many felt no loyalty. There are stories of Polish families keeping secret their intentions to leave and hiding in haystacks on their way to Hamburg in case they were made to stay. 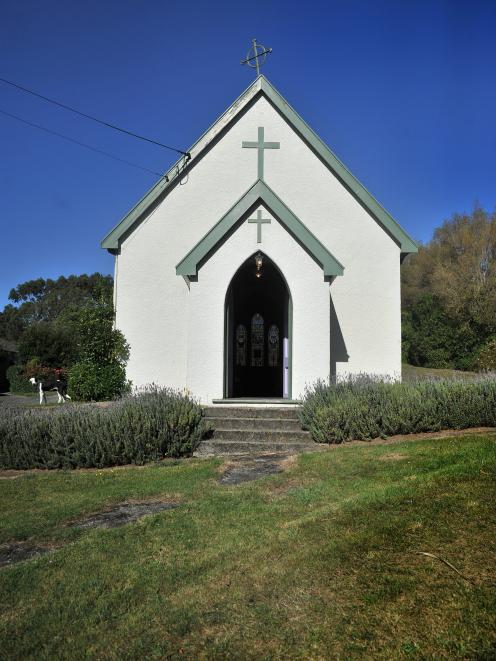 The Polish church in Broad Bay. PHOTOS: CHRISTINE O’CONNOR
Why some chose New Zealand is less clear. There is circumstantial evidence to suggest they believed they were travelling to America, or at the very least a country close to it. One possibility is that they were told New Zealand and America shared the same ocean.

It is also possible, based on a story passed down, that on at least one occasion an English exam was used to determine where emigrants would go. Pass and you would go to America, fail and you were shipped off to the colonies.

At first, immigrants from the port of Hamburg were to be sent to Taranaki. Otago was regarded as too cold and inhospitable. However, due to the onset of land wars, the Palmerston found itself arriving into Port Chalmers.

After a period of quarantine, the Polish contingent set off to Dunedin on December 23, where they arrived at the old immigration barracks. Two days later, on Christmas Day 1872, they held their first Mass in New Zealand and christened three children who had been born on board the Palmerston, at St Joseph’s Church.

In the weeks that followed, many, mainly the single men, left to farm around the region. However, others remained in the barracks described at the time as “altogether unfit for purpose”. They were to be replaced the following year.

It was eventually decided that the Polish families would be employed on the southern trunk railway, in order to finish the remainder of the Dunedin-Clutha line, a key part of the “Vogel Scheme” and scheduled to be completed by 1875.

The families relocated to the township of Greytown, now known as Allanton. Due to a lack of accommodation, they lived in tents for the first couple of months, and due to their unfamiliarity with New Zealand currency, were duly overcharged for their rent.

The work was by all accounts gruelling, involving cutting large ditches to drain Taieri wetlands. Those involved would spend most of their time in great depths of water.

However, a newspaper article stated they were “steady and sober, good workmen”, “spoken of by their employers in terms of high commendation”.

In the years after 1874, only another 93 Poles would follow family members to Otago, as they proved more expensive than UK migrants. Ships from Hamburg were cancelled, and Poles had to pay their own way to New Zealand, with no help from the government.

Of those who did come to the South, most settled in Allanton and Waihola, as well as a short-lived settlement known as Germantown, near present day Gore.

The 200 who came didn’t forget their roots. It was common for Polish to be spoken in households, and it is said that once the train tracks to Dunedin were finished, somebody from the settlement would go to the station in order to see if any Prussian officials had arrived in Dunedin to take them back home. Some would also wear black armbands, as a protest against Polish partition and in the hope of one day seeing an independent Poland again.

Although it is difficult to verify, it is estimated that there are thousands of descendants living in Otago who can trace their lineage back to those 200 Poles.

The story of St Hyacinth’s speaks to this seldom told aspect of Otago’s history. It was built for a sum of £220 ($43,000 in today’s money) at Waihola, where it commanded sweeping views of the surrounding landscape from its hilltop position. It opened its doors in 1899, the opening ceremony attracting a crowd of hundreds, many coming on special trains.

In those early years, the church served the community well. Photographs handed down show family picnics with St Hyacinth’s in the background. The church’s first baptism was in 1900 for Hyacinth Francis Wisnesky, who would later serve in World War 2.

However, by 1918, the church had fallen into disuse. In 1948, a decision was made by the church authorities to move St Hyacinth’s to Broad Bay, which had a large Catholic population without a church.

Nowadays, just as it did in 1899, the Gothic architecture of the most southerly Polish church in the world is “showing out well in the picturesque and commanding site on which it stands”.

Inside the front doors, a large bell hangs to your right. Once located at the top of the tower, and lost following the 1948 shift, the story goes that it was rediscovered in a local garden in 1999, just in time for the church’s 100th anniversary.

It is like stepping back in time, and as the building is only open for Mass on the third Sunday of each month, it is a view that is rarely seen by the public.

My tour guide is Paul Klemick, researcher in residence of Polish Heritage of Otago and the Southland Charitable Trust who have, along with the Broad Bay community, done so much to keep the church going for the past 25 years. The church is, he says, the one visible thing the Polish community has.

“It is a building which demonstrates just how resilient the Polish settlers were.”

Inside to your right there’s a painting of Mary of Perpetual Succour, which was carried on the Palmerston.

Meanwhile, the organ, to your left as you walk in, is original, donated in 1902 and restored in 2009. It is still a key component of Sunday Mass.

The colour scheme is slightly peculiar. Once green, it was changed to purple, purportedly to match the colours of the stained-glass windows. A planned restoration will restore the original green.

The stained-glass windows are original, except for the one overlooking the altar. That was created in 2001 by artist Terry Powers, depicting the Sacred Heart, St Catherine of Sienna, and St Hyacinth. It is almost an exact replica of the original, which was destroyed by vandals in the 1960s.

Although now in Broad Bay, the church is not allowed to forget its Polish roots. Near the altar are Polish and New Zealand flags. Pictures of John Paul II adorn the walls, and parts of the monthly Mass are recited in Polish.

As you exit again, you can look across the harbour to where, almost 150 years ago, the Palmerston arrived. In his diary, Christen Christensen noted that he saw “the singing birds and cattle on grass among the trees”. Little has changed there.

Finlay Forsyth was a University of Otago humanities intern at the Otago Daily Times. He acknowledges the Polish Heritage Trust and Paul Klemick for their help in writing this piece.

If you would like to find out more about Polish migration, and the upcoming 150th celebrations, go to https://polesdownsouth.org.nz/