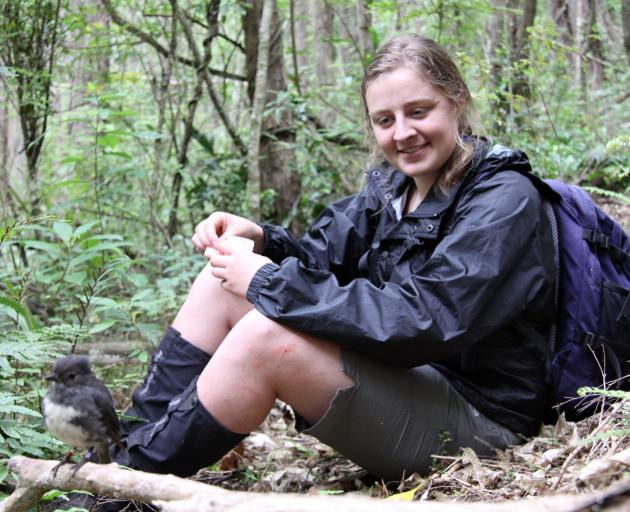 Dr Romana Salis with a banded male South Island robin at Orokonui during an earlier stage of the robin project. Photo: Luke Easton

Spring is the time for pairing up. Zoology student Luke Easton recently led a team counting the numbers of robins getting ready to breed in Orokonui.

Mist shrouds the track as we weave our way through the old pine forest into the heart of Marie Gully at Orokonui. Once we arrive at a track junction, the four of us split into two pairs and head in opposite directions. 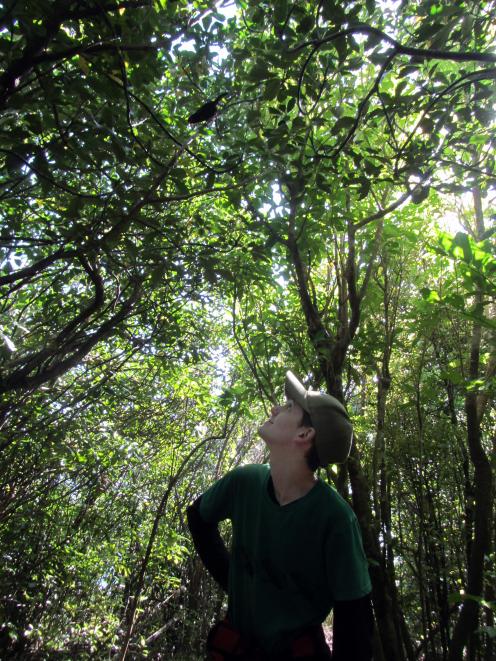 Luke Easton spots a saddleback during another of his projects. Photo: Sally Wren
Accompanying me is Myrene Otis, an undergraduate student at the department of zoology at the University of Otago. Myrene and I slip and slide down into the lush native broadleaf forest that forms a seam along the gully. We traverse the stream and head straight towards the kanuka forest on the other side.

I stop abruptly and begin clapping loudly so that the sound radiates around us. Right on cue, a South Island robin appears on a branch further down the slope. It is a male, who sits patiently with his head cocked to one side searching inquisitively for a food reward, which Myrene obligingly provides: a mealworm (grub).

He immediately flies up to our track and collects the grub, but he does not eat it. Instead, he holds the grub firmly in his beak and calls to his mate, who then arrives shortly after and begs him to feed her. He does and immediately expects us to feed him some more food.

After he feeds several more grubs to his mate, she then returns to their nest. It is the robin's curious nature that enables us to "train" them to associate a food reward with clapping, but we don't do this for fun - we train them to monitor the population and find out how many breeding pairs there are. That is our mission today. 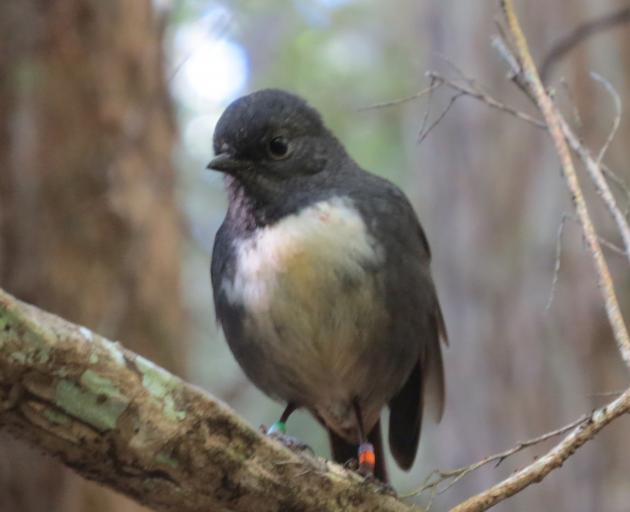 A banded robin looks for any sign of a forthcoming mealworm. Photo: Alyth Grant
It has been almost a decade since South Island robins were transferred to the sanctuary. At the time, there were three small populations of robins in Dunedin: at Silver Peaks, Silverstream and Flagstaff.

Given the risk of predation by mammalian predators and habitat loss (two of these populations were found in forestry blocks), it was essential that a population was established in a safer haven - Orokonui. The transfer of robins from all three populations to Orokonui was timely, as shortly after this translocation, the Flagstaff population became extinct.

Fortunately, the descendants of individuals originally from Flagstaff still survive in Orokonui to this day. Moreover, the population of robins at Orokonui has increased exponentially since their release.

At first, there were 10 breeding pairs, but this number has since grown to almost 10-times that size. Robins at Orokonui have now become the stronghold population for this threatened species in Dunedin, given that few juveniles survive to become breeding adults at Silver Peaks and Silverstream. Perhaps one day there could be a transfer of robins from Orokonui back into Silver Peaks and Silverstream to "restock" these populations, provided pest control is established in these areas and the risk of habitat loss somehow reduced. 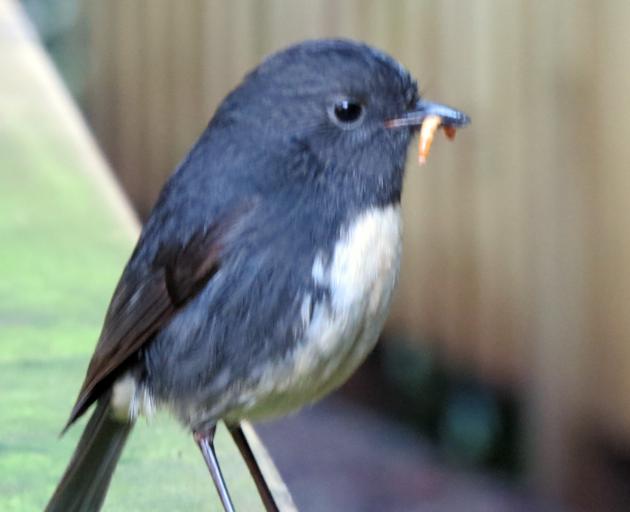 A well-trained robin at the viewing platform waits for another mealworm to take back to the nest. He can manage seven at once. Photo: Alyth Grant
However, as with anything to do with conservation it is often a slow journey, and in the case of the robins at Orokonui, it has also been a personal one for the many people who are familiar with their history. For these people, the robins represent not only a conservation success story, but also a legacy.

I look at Myrene as I recall those bygone days when we monitored the same breeding pairs year after year, like visiting old friends who we got to know so well. Back then, all the birds were banded with coloured bracelets on their legs, so we knew who everyone was. I even remember the day seven years ago when we banded the male robin that Myrene is now feeding grubs to. How times have changed.

Myrene and I zig-zag along the network of tracks, visiting sites where the original pairs used to be. But they are no longer there. Instead, the un-banded descendants of our old friends are now in residence. I cannot help feeling a slight twang of sadness that our old friends are no longer with us, but life goes on, and listening to the many robins singing throughout the valley reiterates that this mission is worth fighting for. A new dawn yes, but for the better. Robins and all.

Luke Easton is a PhD candidate in the department of zoology at the University of Otago.