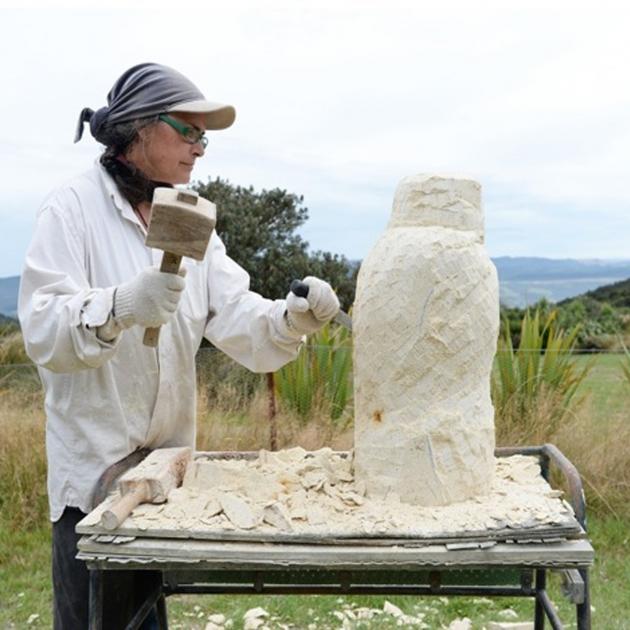 Moira Crossman working Oamaru Stone to create “Kahu”.
Alyth Grant reflects on what she learned on a walk with local artist Moira Crossman looking at sculptures  in the Orokonui Ecosanctuary. 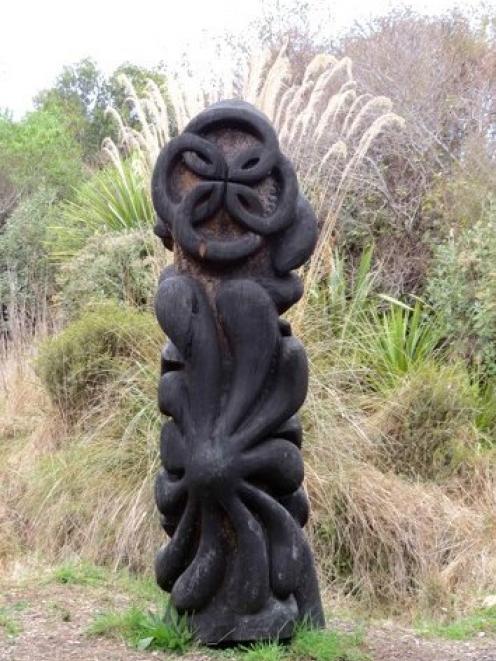 Davie McGhie's pou of macrocarpa on Orokonui’s butterfly track.
Approaching the elegant visitor centre at Orokonui, an observant visitor will note the first hint of the treasures within the ecosanctuary in the form of two stone sculptures, semi abstract pieces in smoothly polished argillite. They sit on either side of the entrance. Looking closer, the viewer recognises a rounded breast and the unmistakable curve of a parrot’s beak lifted to the air as it spreads its wings in the act of taking off.

These are the work of one of Orokonui’s earliest volunteers, artist Moira Crossman, whose passionate love of nature has inspired her both in her art and her volunteering in the ecosanctuary. She has produced works that enhance the ecosanctuary and add another dimension to the visitor experience. In addition, she has animated other artists to respond to this environment through organising working symposia on site. Working together and talking together in the natural environment has connected them and inspired them. Visitors now encounter their art as they walk around the upper part of the sanctuary.

Some, like the striking figure of Alex Whitaker’s Tane Mahuta on his prominent site in the Otago skink pen is already very familiar. His protective gaze has been surveying the Orokonui valley since 2014. But others, from the second symposium, have only been installed more recently.

The artists of the first symposium worked with local materials, phonolite, macrocarpa, and one is a living sculpture, a circle of ti kouka, cabbage trees. In the pond from which the takahe drink sits a bowl chiselled by Tania Turei from the phonolite of Otepoti’s volcanic past, and inscribed delicately with feathers. Further on, at the track junction by the first bird feeder sits a sculpture by Rory McDougal, in which he symbolised the essence of Orokonui. In his words the stones are “related in form and story, the bird and the sanctuary, air and land, many rings of protection, the people, the sanctuary and the nest with egg.” 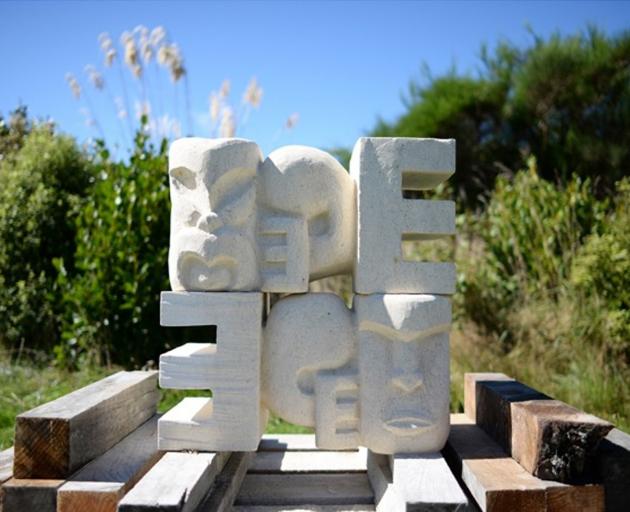 Alex Whitaker’s Ranginui and Papatuanuku, sky father and earth mother guarding the anticipated jewelled gecko enclosure.
The motif of the ring is found again in the living sculpture by Russell Moses, on the road to the aviary. On a site once used by local Maori women to harvest ti kouka, stands a circle of them: cordyline australis. Ti kouka supplied Maori with far more than just the “cabbage” Captain Cook took from them. They were harvested for food and medicine, and also supplied the strongest of fibres for footware, clothing, mats and thatching. These trees have already grown to some height since planting, and have borne out their reputation for stoicism and determination: several, damaged in high winds, have nevertheless grown back again. Truly, a living sculpture, as well as a reminder of the history of this piece of land.

In the world of the pioneers who later farmed it, shelter was as important as food, and for that they planted the Monterey cypress we know as macrocarpa (cupressus macrocarpa). Several of these trees remain, because the kaka love them, but most have been felled and their wood now serves well as seats along the tracks. One, however, became a sculpture, located on the track connecting the eel pond to the kaka track. Inspired by his study of an early book on the trees and shrubs of New Zealand, Davey McGhie carved a tall pou of swelling, vegetative forms. Since its installation it has weathered from the bright colour of raw macrocarpa to much darker tones.

At the more recent symposium, in 2018, the artists all worked in Oamaru stone, but not all are placed at Orokonui: one, by Fiona Tuihana, is to be located in the community. Moira Crossman’s “Kahu” has a site looking down the aviary road toward the circle of ti kouka. Kahu is the Maori name for the Australasian harrier hawk, whose feathers fade in colour as the bird ages. Moira has watched just such an old kahu in the neighbourhood, flying or sitting on a post as if pondering, and thus she has portrayed him here. 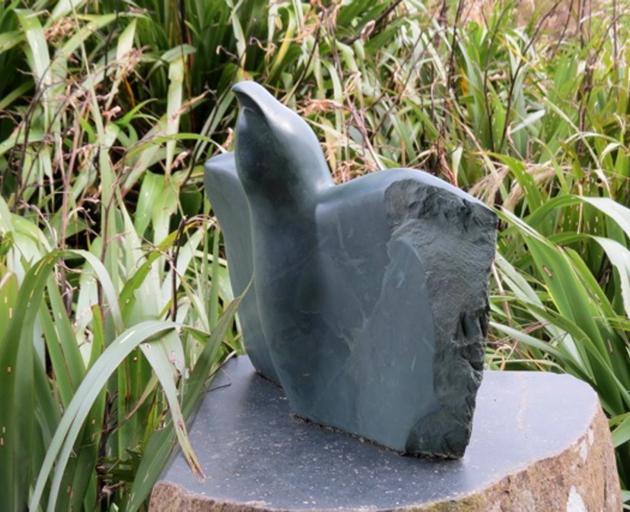 Moira Crossman’s kaka greets visitors at the Orokonui entrance
Stillness and reflection is embodied in Brent Holly’s “The Sound of Silence” located by a small pond off the beaten track surrounded by bush and fine red tussock. Our takahe evidently appreciated the seclusion of the site, Paku having built her first nest of the season just nearby. Maybe she enjoyed the reflection in the water as she sat the long hours on the nest!

Alex Whitaker’s newest work is again in a very public place, appropriately in Tane Mahuta’s line of sight. It embodies an image of his matua, Ranginui and Papatuanuku, sky father and earth mother, still locked in their tight embrace before being pushed apart by Tane, allowing light to flood the earth.

In that light Orokonui flora and fauna now flourish. The work of the artists will for some perhaps be merely decorative, but for others will be a reminder of the interweaving of art, culture, story and the natural world in human experience.

- Moira Crossman trained at the Otago Polytechnic School of Art and is based in Waitati.