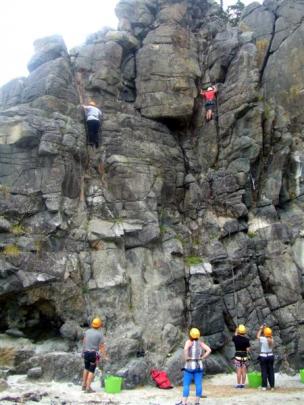 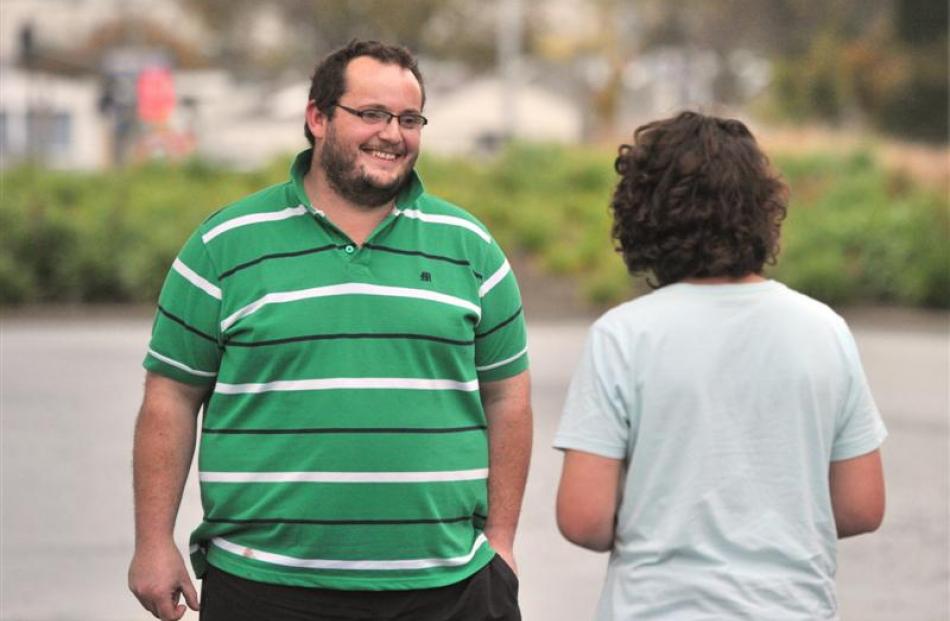 Former mentor Brad Coleman chats with 14-year-old John. 'If you give a little time to someone else, it benefits you as well.' Photos by Linda Robertson.

The teenage years can be a tough time. Kim Dungey meets some locals who are making a difference.

When Brad Coleman volunteered to mentor a 13-year-old, he didn't expect to be attending an Armageddon expo.

The idea came from John, the young person with whom he had been matched.

Coleman usually spends his weekends following rugby, watching movies with his wife and tinkering with his model railway.

A comics convention at which people dress up as their favourite cartoon and sci-fi characters was an ''eye-opener''.

However, he and John have also enjoyed more ordinary pursuits, such as driving a forklift at Coleman's workplace - ''he loved that because he could rev it up like a PlayStation game'' - buying wood and building a kitset barbecue.

And the woman who introduced them says it is those everyday activities that mentoring is all about.

''People hear the word, mentor, and think `what do they have to offer','' says Otago Youth Wellness Trust mentor co-ordinator Anna Bragg.

''But it doesn't have to be about being the best at everything. You can just share your time with someone and the magic happens.''

Giving young people new experiences is a key part of the mentoring programme run by the trust, a community-based service that works with young people with ''multiple, complex needs''. Matching them with trusted adults also helps them build their resilience, form positive relationships and participate in the community.

In many cases the weekly or fortnightly activities are the most consistent things in their lives and the friendships continue informally beyond the year they commit to.

Today Coleman is reuniting with John at the trust offices, a red-brick building in Parry St that was previously home to Fletcher Holdings and Downer Engineering.

A foreman at Precast Concrete, the 28-year-old is still in his shorts, orange polo top and work boots. John, now 14, wears his school uniform, eyes shining under a mop of curly black hair.

''It was fun,'' he says when asked about their year-long friendship.

''It got my confidence up and I can talk to people better.

''My friend saw me going out every second week and used to wonder what I was doing. I told him and he thought it would be cool to have [a mentor] too.''

Driving the forklift, making a concrete dog bowl and building a ramp for his skateboard were the activities he enjoyed most, he adds, even if the ramp made from a recycled wooden fence did break when he jumped on it.

Coleman also recalls the day John spent two hours on his scooter at a skate park.

''My job was to stand there watching how high he could get every single time and you could see the grin on his face when he knew he was getting higher. He was proud of himself and that stood out for me.''

Becoming a mentor was suggested by his wife, who works in administration at the wellness trust. It seemed a good way to meet new people and to find out ''what kids are up to these days''.

''It took a while for us to break the ice but after that first meeting, we got on like a house on fire.''

Trust staff were confident that would be the case: both enjoyed making things and Coleman's calm, steady character was sure to be a balance to the teen's lively personality.

Another pair seemed to have less in common. Neil was 13 and extremely shy. Dr John Schofield was director of animal welfare at the University of Otago, a painter, a Rotarian and 46 years his senior.

''Who at face value would ever see that there would be anything in common there?'' Bragg concedes.

''But it was a relationship that flourished.

''A huge amount of thought goes into who we match with and why ... We don't want this not to work because a lot of our young people have already had adults in their lives let them down.''

A year after they met, Schofield was surprised when Neil expressed an interest in continuing their outings. Four years into the friendship, the former academic is retired and Neil, who is good at chemistry and maths, is considering doing tertiary study.

As well as riding bikes, playing golf and going to museums and the movies, the pair made boomerangs and threw them on the field at Forsyth Barr Stadium ''accompanied by a guard'' in case they damaged the grass.

''Initially it was a monologue in the car. I was talking and he was grunting. But it's been a great experience,'' Schofield says, adding that one thing that kept him ''at it'' when Neil was uncommunicative was seeing a slight grin on his face when he mentioned something and knowing he had got the comment or joke.

The teen's growing confidence was also obvious the day they took a stunt kite to a park near St Kilda Beach. When Schofield wandered off to lie down in the grass and watch the clouds go by, Neil started to divebomb him with the kite, seeing how close he could get without actually hitting him.

''It was great, super. He was experimenting and having fun.''

On another occasion, Schofield borrowed a ''beautiful'' cedar-strip kayak from a university friend so the pair could paddle up the Taieri River to John Bull Gully. Sent for firewood, Neil returned with a handful of wet twigs.

As they cooked sausages over the flames, the tide came in and they laughed as they ''picked up'' the fire and moved it.

But later, when they rolled the double kayak over to wash off sand from the underside, the rudder assembly got stuck on a rock and snapped off.

Schofield saw the mishap as a learning opportunity. On the drive home, they discussed what they would say to the owner. At Brighton, they called at the dairy and bought the last box of chocolates on the shelves by way of apology.

A photo from the day is now on display in Neil's living room.

''That sort of experience is what it's all about: sharing an outing together, exposing young people to something they wouldn't perhaps otherwise have experienced,'' he says.

''It's not rocket science - a visit to the beach or whatever - but it's good value. Otherwise, you're going to be stuck at home, watching television and how boring is that?''

The 63-year-old says his interactions with Neil's father had also been friendly and on one occasion they even discussed the ''delicate matter'' of whether a mentor assumes a paternal role.

''Both of us admitted to having had some potential concerns ... but both of us agreed the relationship seemed to have [evolved] without any such role developing and the matter was never discussed again.''

Schofield is now mentoring another 13-year-old and Coleman says it is something he would do again when he has the time.

One reason the former participated in the programme was a desire to share the kind of upbringing he enjoyed, living with both parents, a sister and a brother and being constantly exposed to new ideas and activities.

''As you get older, there aren't so many new experiences in life ... To see the younger generation switched on by a new idea, that excites me.''

He admits he was wrong, however, to think that because he and his wife had raised two children, he did not need the trust's mentor training.

''There are issues about parents putting their son or daughter in the hands of someone else who initially is a complete stranger. So there are procedures to follow, responsibilities to be understood and strategies for when things perhaps don't go right.''

The course also made him more aware of problems of which he had no personal experience, he adds.

''Cold houses, bad food, no transport, people struggling and perhaps dealing with interpersonal relationships that aren't all that stable ... These kids have had some difficult times and it's nice to be able to help.''

Neil's name was changed to protect his identity.

The next intake for mentors is in May. The trust says they should be caring, non-judgemental, have a range of interests that they can share and the ability to ''walk alongside'' a young person and be comfortable in their community.

Candidates are vetted by police, go through an interview and 15 hours of training, and while paired with a young person, attend monthly group supervision.