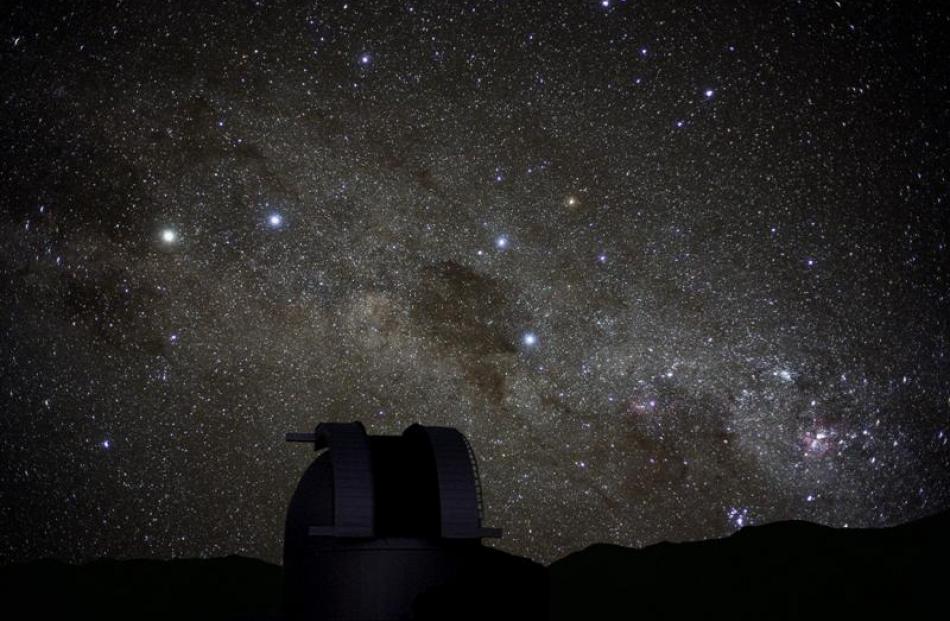 The night sky above the Mt John observatory at Tekapo. Photo by Fraser Gunn. 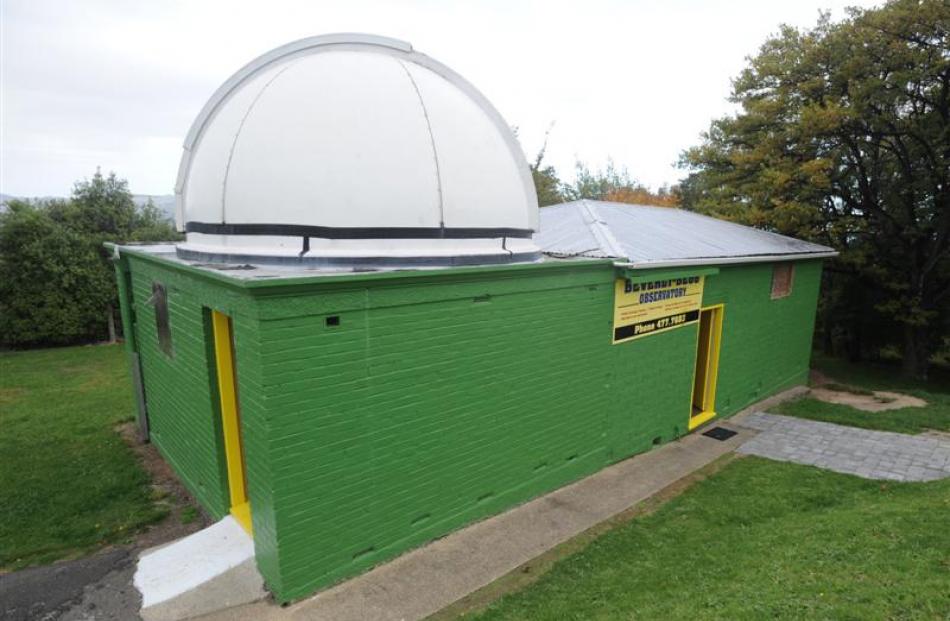 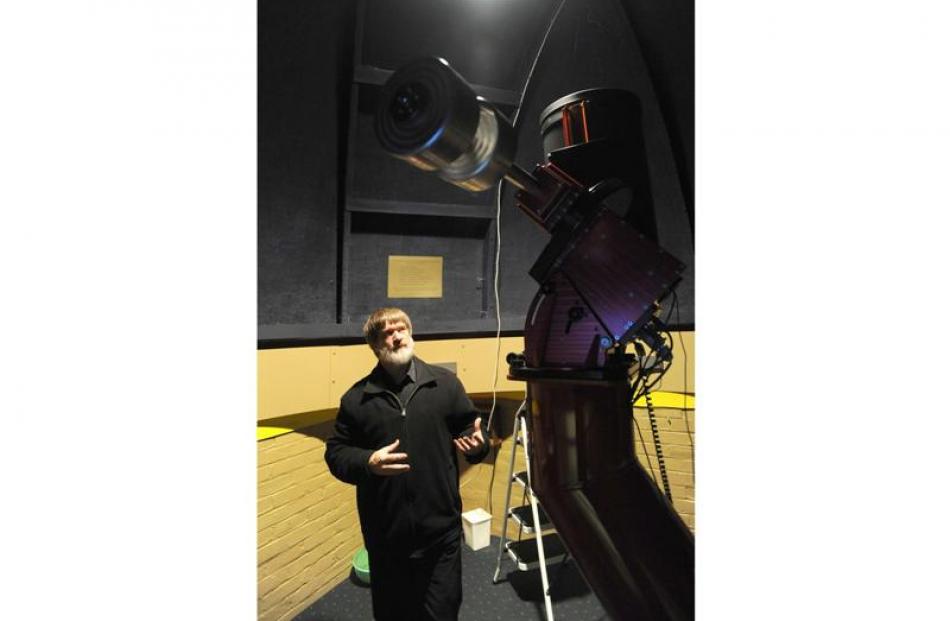 There's something out there, we are just not sure what it is. Charmian Smith discovers that 400 years after Galileo spotted Jupiter's moons, and in the International Year of Astronomy, there is still plenty to discover in outer space.

When people look through a telescope and see a little round disc with a line across it, then realise it's actually the planet Saturn with its rings, they are astonished, according to Peter Jaquiery, president of the Dunedin Astronomical Society.

"It seems so much more real than anything else," he enthuses.

The uninitiated might be equally astonished that such amazing discoveries are possible from the unassuming little green and yellow building nestled at the bottom of Robin Hood Park, on Dunedin's City Rd.

But sure enough, the tell-tale white dome atop the Beverly-Begg Observatory opens to a view extending far above the trees of the city's town belt.

A view with no horizon. A view that according to the latest developments in astronomy goes deep into the unknown.

For the most part, Mr Jaquiery and other members of the society are content to show visitors to the observatory around the known wonders of the night sky, on their Sunday open nights.

"You can even say to people, you are going to be blown away by this and you are going to say `wow'; then they will have a look through the telescope and they actually do say that," Mr Jaquiery says.

"It's quite satisfying."The society's ability to lay on such stellar entertainment was considerably enhanced in September last year, when it installed a new 35cm Celestron telescope (costing about $12,000) on a Software Bisque Paramount ME robotic telescope mount (about $24,000) with camera and new monitors, and refurbished the almost 90-year-old observatory for a total of about $50,000.

Now, with daylight saving past and the long clear, frosty nights of winter beckoning, the members are gearing up to use it for more scientific observations.

It seems fair to assume that Galileo Galilei, the 17th-century Italian astronomer, would be pleased.

Four hundred years after he first used an astronomical telescope, others are probing the distant southern skies for further revelation.

In that tradition, and cloud permitting, Mr Jaquiery says those at the Beverly-Begg Observatory will again be looking to contribute to scientific knowledge about how stars work and the wider universe.

Astronomy is, he says, one of the few sciences where amateurs' input can make a difference.

The new telescope, and particularly the new computer-controlled mount and drive will enable the society to do work that was difficult with the old 1970s-era gear.

Because of the Earth's rotation, stars appear to move across the sky, so if you are photographing a star with a long exposure, and want it to appear still, you need to follow the rotation.

The new mount and its drive will do this precisely, Mr Jaquiery says.

Finding an object among the millions of stars, many of them very faint, is also easier with the new equipment.

It will point the telescope to the right place in the sky within a minute of arc (about the thickness of a fingernail held out at arm's length).

A little tweaking will make it even more accurate.

"That's a huge advantage because most of the objects we are looking for are very faint. You wouldn't necessarily recognise them by eye and you could spend hours trying to find something if you had to do it manually.

"That opens up a whole world of possibilities because if we get information to say there's something interesting happening to an astronomical object, we can have a look at it and record some light curves.

"We can say to the telescope, go to that object; and be pretty confident we've got the right object. There was no way at all we could do that in the past."

There is plenty of opportunity to get in on that sort of star-gazing excitement.

Most of the big, professional telescopes, such as those at the University of Canterbury's Mt John Observatory at Tekapo in the Mackenzie Country, are dedicated to specific projects.

That leaves a huge gap for enthusiasts and amateur astronomers to fill, especially in observing details and making accurate measurements.

"There's a great deal of work you can do with very simple equipment and that's where we can provide a big contribution," Mr Jaquiery says.

"To put that in perspective, up at Mt John they have a large two-metre telescope and it is used for a particular task in conjunction with a Japanese university that provided the telescope.

"It's part of the ongoing project, but one of the things that telescope sees, sort of as a side effect, are events that could lead to the detection of planets around solar systems outside of ours."

• When the astronomers at Mt John detect such an event they send the information to other astronomical groups in the southern hemisphere and members of those groups can observe it and record information on the light curves.

The information from various groups is collated, the numbers crunched and at the end they might discover a planet, Mr Jaquiery says.

"One of the nice things about astronomy is that to a large extent the sort of data we, and other people like us, would be generating is pretty much freely available over the net.

"Part of this is spearheaded by Nasa, who make virtually all their astronomical images freely available."Typical observations and measurements the Dunedin society plans to make are of occultations, objects such as the Moon or asteroids passing in front of another celestial body such as a star.

By timing the disappearance and reappearance of the star they can find out about the shape of the occulting body, Mr Jaquiery says.

Members of the society also measure the brightness of variable stars.

Sometimes the brightness may vary over short periods like hours, or sometimes longer periods such as tens or hundreds of years.

Measuring the light curves and comparing them can help tell what goes on inside a star or between two stars that orbit around each other.

Then there are the occasions when astronomers look at objects in the sky without being aware of what they are, says Mr Jaquiery.

He tells of a case in point. The story concerns a famous miss by two of the society's members, in 1987.

They were photographing one of the Magellanic Clouds and in those days, before computer-driven telescope mounts, you had to find a bright star in the frame and track that for the exposure time.

"So these two guys had found their nice bright star and were tracking on it.

"They were fairly accomplished astronomers - one, Stuart Ryder, has gone on to become a fairly well known professional astronomer.

"What they hadn't figured out was there were no bright stars of that nature in that part of the sky and what in fact they were taking a picture of, although they didn't realise it, was a supernova [an exploding star].

"They actually ended up getting a very nice series of pictures that were subsequently used for brightness information about this supernova, but they had caught it just after it exploded.

"The near miss was they didn't recognise what they'd got, because if they had, they would have been listed among its discoverers."

The good news is there remains plenty to discover in the heavens. In particular, planets. Some, perhaps, even like ours.

Dr Craig Rodger, of the University of Otago's physics department, says such endeavours are very much at the forefront of celestial inquiry.

"What's really swinging in, in the very near future, is the possibility of finding planets around other stars that are of similar size to Earth.

"While we might not be able to tell if they have life - that's too hard - we can tell by monitoring their orbits whether they are in the habitable zone for that star," he says.

This stuff is the domain of the final frontier's biggest brand, Nasa, which has this year launched the Kepler Mission terrestrial planet finder.

There are 346 known planets so far, according to the New Worlds Atlas website.

"That is relatively incredible given that only about 10 years ago we hardly knew there were any planets outside of our solar system," Dr Rodger says.

"Then over 10 years we've gone to the point of being able to detect tiny planets, like our own, around distant stars. So that's really exciting."

• Further out in the most distant reaches of astronomy and astrophysics, lies the puzzling phenomenon of dark energy, a mysterious antigravity force.

Evidence for which, apparently, comes from the speeding up of the expansion of the universe and the background microwave radiation left over from the Big Bang.

"We are not sure what's going on there. Dark matter was initially a bit scary - there were lots of unknowns and people had ideas, but dark energy is worse."

In the past five years astronomers have realised that about 75% of the universe is dark energy, 13% dark matter, and only 7% is normal matter.

He suspects we are at a period of huge change in understanding about the universe, similar to the late 19th century.

Then people thought the universe ran like clockwork and they only needed to tidy up a few details.

"Then in the early 1900s along came quantum mechanics and relativity, Heisenberg and Einstein, and we realised there were a whole lot more things that really mattered that we didn't understand.

That was a huge sea change.

I suspect we may be looking at one of those times in cosmology now, where a few years ago we thought there's some uncertainties, but we are doing really well, and then suddenly we get to this realisation that we understand only 7% of the universe and suddenly we've got some very big questions," he says.

Nevertheless, Dr Rodger thinks one of the most exciting stories this year happened in our own backyard - finding evidence of methane in the atmosphere of Mars, and that the amount changed with time.

"We know of two ways to make methane. One is active volcanism and the other is life. Mars isn't meant to have either.

"So in a science sense that's a real winner - we've found something really interesting that we can't explain.

The Hubble space telescope is also about to be upgraded so even more exciting new observations may be made, he says.

All of which seems likely to provide observers at the Beverly-Begg Observatory, whether keen amateur or visitor, with plenty to ponder.