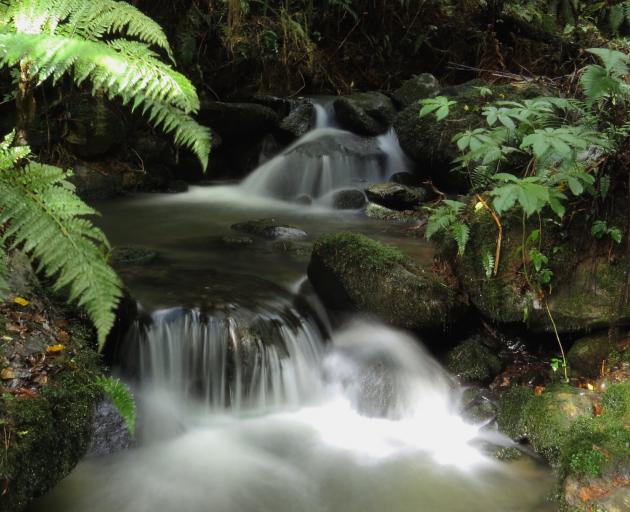 The abundance of life in Orokonui Stream is clearly indicative of its health. PHOTO: ALEX WELLER
The stream that flows through Orokonui Ecosanctuary is just as it should be, writes Jeanne Hutchison.

The richness of Orokonui Ecosanctuary can be measured in the biodiversity it supports, as well as the fauna that it protects and its lush forest.

At the heart of the forest flows the Orokonui stream, teeming with life, mainly due to it being free from the negative impacts of introduced fish. The stream also benefits from the filtered run-off through the bush-covered hills that surround it. Kiwi may easily be tempted by the stream’s freshwater crayfish and nymphs.

For many years Orokonui educators Tahu Mackenzie and Taylor Davies-Colley have been observing what is concealed below the surface of the stream. Their interest in the Orokonui ecosystem has encouraged many students from around Dunedin to become ‘‘citizen scientists’’.

They search for living creatures in the stream by setting fish traps with cat food, turning over rocks to reveal what’s under them and capturing critters in nets.

The abundance of life in the stream is clearly indicative of the stream’s health. Larvae of aquatic insects such as mayflies, stoneflies and caddisflies, to name a few, are evidence of a clean stream with high water quality.

One of nature’s wonders is observing the various caddisfly larvae. Depending on the species, they adorn their bodies with a casing of sticks, stones, or grains of sand which, look like decorations but are more essentially for protection and rigidity.

These and other aquatic invertebrates provide a plentiful food supply for fish, such as the redfin bullies (Gobiomorphus huttoni) that, as the common name suggests, are known to bully similar-sized fish in the shallows. Male redfin bullies are easily identified as they are beautifully colourful with bright blood-red striped fins. Like other bully species, the male guards the nest before the hatchlings are swept out to sea. They return later to freshwater as juveniles.

Other fish in the Orokonui stream include four galaxiid species, the larvae of which also get washed out to sea, where they spend their early development living with the plankton. They return six months later as whitebait.

One of these galaxiid species is the rare banded kokopu. They can ascend waterfalls and rapids using their strong fins and the surface tension of wet rocks to head upstream, searching for their preferred habitat. Orokonui stream provides ideal shelter for them in the form of undercut banks, submerged logs and small shallow pools with a river bed of rock or gravel.

The serenity of the stream can be enjoyed by walking the Robin Valley track (two to three hours return from the visitor centre). As the track meanders downhill alongside the stream, it passes tree fern groves, giant podocarps and regenerating kanuka/broadleaf forest before passing by the tallest eucalypts in the land.

The forest provides shade for the stream, creating ideal habitat by reducing algal growth and helping to moderate the temperature.

The stream, in turn, has assured the preservation of the forest. Since 1878 forests have been cleared around Dunedin for timber and space for development. The bush at Orokonui escaped this fate as it was considered essential for protecting the stream, which was the water source for the psychiatric hospital established in the lower valley in 1900.

As the stream nears the Orokonui estuary, at the base of the Orokonui valley, the salinity of the stream can be affected by the ebb and flow of the tide. Here you can often see blue damselflies resting on vegetation edging the stream. This vegetation is also the hatching place of galaxiid species — the larvae waiting for a high spring tide (created by the gravitational pull of the autumn moon) to sweep them out into Blueskin Bay and out to sea, in order that they might return to the refuge of Orokonui once they have matured.

- Jeanne Hutchison is a volunteer and former guide at Orokonui Ecosanctuary.