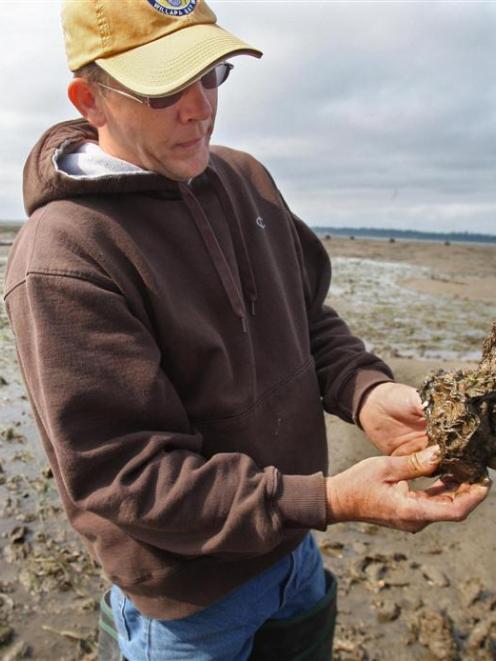 Growers rely on wild oysters, which typically grow in clusters like this. Third-generation shellfish farmer Brian Sheldon now must turn to oysters started in hatcheries. Photo by MCT.
As the Bluff oyster industry watches hopeful signs of recovery, oyster fishers in the US are witnessing cause for concern, Craig Welch, of The Seattle Times, reports.

The collapse began rather unspectacularly.

In 2005, when most of the millions of Pacific oysters in this tree-lined estuary failed to reproduce, the shellfish growers of Willapa Bay, Washington state largely shrugged it off.

In a region that provides one-sixth of the nation's oysters - the epicentre of the West Coast's $US111 million ($NZ160 million) oyster industry - everyone knows nature can be fickle.

It spread to an Oregon hatchery that supplies baby oysters to shellfish nurseries from Puget Sound to Los Angeles.

Eighty percent of that hatchery's oyster larvae died, too.

Now, as the US oyster industry heads into the fifth summer of its most unnerving crisis in decades, scientists are pondering a disturbing theory.

They suspect water that rises from deep in the Pacific Ocean - icy seawater that surges into Willapa Bay and is pumped into seaside hatcheries - may be corrosive enough to kill baby oysters.

If true, that could mean shifts in ocean chemistry associated with carbon-dioxide emissions from fossil fuels may be impairing sea life faster and more dramatically than expected.

And it would vault a key Washington industry to the centre of international debate over how to respond to marine changes expected to ripple through and undermine ocean food webs.

Scientists seeking to explain what's plaguing these coastal oysters say the link to more corrosive water is strong but anecdotal.

It could be just one of several factors.

But the possibility leaves some shellfish farmers uneasy about more than just their future business.

Indications that ocean acidification may already play a role in the decline of oysters are a "sign of things being out of balance, and that scares the living daylights out of me," said third-generation oysterman Brian Sheldon.

Ruffling his 8-year-old son Jebediah's head, he added, "For this guy."

Pacific oysters aren't native to Willapa Bay, but shellfish growers have farmed them here since the 1920s.

It's about the only place left on the West Coast where growers look to the wild to get their oysters.

Normally, oysters spawn in the water, producing larvae that swim and eventually attach to a hard surface - typically other oyster shells.

These succulent molluscs are then moved by hand throughout the bay and take two to five years to fatten up.

But somewhere between the larval stage and settling on a shell, these embryonic oysters are dying.

And since only a few young have survived since 2005, "we're running out of oysters in the bay," said Bill Dewey, spokesman for Taylor Shellfish Farms.

"Growers are scrounging for whatever they can find."

Researchers at first blamed an explosion in the number of Vibrio tubiashii, an ocean-borne, larvae-killing bacteria.

When researchers sampled the marine waters that are sucked directly into the hatcheries from the sea, they found bacteria counts nearly 100 times above normal.

Even after microbe-killing ultraviolet water-treatment systems were installed, larvae died.

Then they noticed the water's pH - the scale measuring acidity and alkalinity - sometimes dropped below normal, becoming more acidic.

Seawater typically is slightly alkaline, but when oceans absorb carbon dioxide from the atmosphere - as they have by the hundreds of billions of tonnes since the Industrial Revolution - they become more corrosive.

They expected to notice it first in deep water, some of which hasn't circulated to the surface in 1500 years and has therefore accumulated more atmospheric carbon dioxide.

Those waters are replaced by the icy-cold, more corrosive seawater welling up from hundreds of metres below.

Throughout 2008, researchers at Oregon's Whiskey Creek Shellfish Hatchery noticed a trend: Their die-offs tended to come after north winds pushed those very same deep waters into the pipes that feed the hatchery.

"There seems to be a strong correlation," Dr Feely said.

In a sense, that's exactly what scientists expected - just not so soon.

Already, scientists have taken pteropods, tiny marine snails that swim in the open ocean, from the Gulf of Alaska and exposed them to slightly acidified marine water in a laboratory.

Those creatures make up 60% of the food for Alaska's juvenile pink salmon.

Similar creatures support many of the major fish species in Alaska's North Pacific.