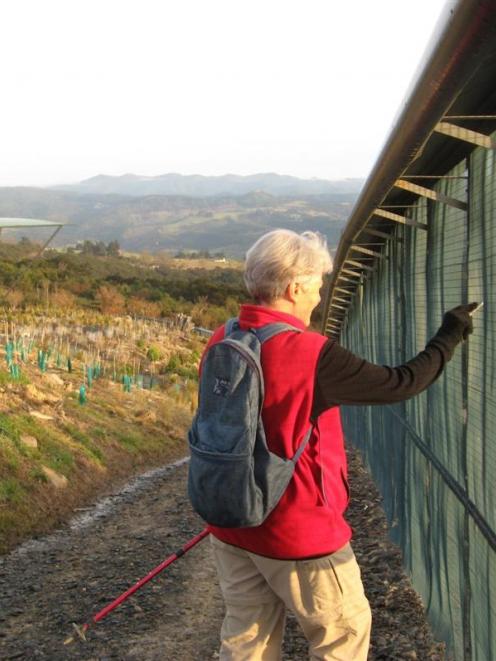 It's 2:40am. The unusual and penetrating text tone of a traditional Japanese jingle rudely awakens an Orokonui ranger. It is the surveillance phone alerting its human minder that there is a potential problem with the $2.2 million predator-resistant fence.

Outside the rain is pouring down and the wind is gale force, but this is no time for drifting back to sleep: the phone message means there is work to be done. A message coldly stating sector breach is about as bad as it gets. This is the frontline in the defence of the Orokonui Ecosanctuary.

Since the gate was closed in July 2007, introduced mammals have dominated the thoughts and actions of the Orokonui Ecosanctuary operations team. The eradication of 13 species of mammals inside the fence, and then keeping them out, has always been the top priority for the ecosanctuary.

The key to keeping the ever-testing hordes out is the specialised predator-resistant fence. Managing and maintaining the integrity of the Xcluder fence has proven to be harder than initially thought. Extreme weather events such as high winds and rainfall can damage the infrastructure and engineering deficiencies detected post-construction have most likely led to the reinvasion of mice at least.

Several random acts of vandalism have not helped.

The mesh, specially made in China, is the crux of the fence's success. No gaps larger than 7mm should exist in the structure as even such a tiny gap could admit a small mouse.

With 51 water culverts, 8.7km of mesh and hood, four vehicle gates and two pedestrian gates, maintenance is far from easy. We manage through a combination of technology, experience, staff diligence and most important of all, volunteer enthusiasm and dedication.

On average, the fence is closely examined twice a week in good weather. Normally a volunteer is allocated a component of the fence to inspect and goes off on a slow, methodical stroll to look for faults on that section. The inspector always carries the measuring device affectionately dubbed The Doffer: If this can go through a gap so can a young mouse.

The second check is normally carried out by staff as they regularly traverse the fence line on other duties.

At times of high rainfall (more than 50mm over 24 hours) or strong winds (over 100kmh) staff will do special inspections. Orokonui staff can be busy in the teeth of a storm. During the recent storm that saw gusts at Taiaroa Head reaching 160kmh, dedicated staff were on patrol.

An electronic surveillance system is essential for highlighting fence problems. The system runs the length of the fence and taps into all access and water gates. If a tree falls on the fence, a hot wire hovering expectantly above the fence shorts out an electric circuit and activates an alarm, with a text message alerting the person assigned to the surveillance phone. Likewise, if a gate is left open for too long, this also results in an alert text.

So far, damage to the fence has been relatively minor. Heavy rain has blocked culverts and some of these have overflowed on to the fence. Several slips have come down but none has actually damaged the fence itself.

In the worst case, a boulder rolled against the fence mesh but did no damage.

Last month's wind storm resulted in only one small tree falling on to the fence, causing minor cosmetic damage.

Yet through all the challenges and little setbacks, the positive effect the fence has on reducing mammalian presence is facilitating dramatic ecological restoration. The revegetation is staggering, and species such as pate (Schefflera) and Pseudopanax, including three-finger - ice-cream species to possums - are once again flourishing.

The diversity of the bird life has also increased dramatically: on a good day visitors, staff and volunteers will experience rare birds such as saddleback, robin and kaka, and the trained eye can easily spot the characteristic scat of kiwi.

On a very good day, one could experience more than 23 species of native forest birdlife, a rare experience indeed. Some species have not been seen around Dunedin for more than 130 years.

- Elton Smith is conservation manager at the Orokonui Ecosanctuary. The Wild Ways column runs on the first Saturday of the month.