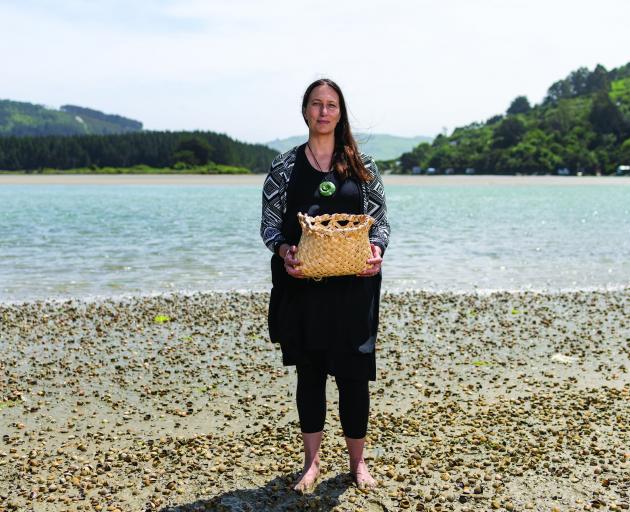 Prof Jacinta Ruru, who has co-edited a new book, Nga Kete Matauranga, which discusses the experience of Maori in the academy. PHOTO: GRANT MAIDEN
Opportunities are going begging as we fail to recognise the potential of matauranga Maori, Prof Jacinta Ruru tells Tom McKinlay.

In a beautifully produced new book of heartfelt and revealing storytelling, Maori academics write of the impossibility of being anyone other than themselves within their disciplines.

And yet, the common experience of that not being possible, or, at the very least, a constant struggle.

The book, Nga Kete Matauranga, subtitle Maori Scholars at the Research Interface, allows leading Maori thinkers, researchers and teachers to speak about the barriers they encounter within our tertiary institutions.

Co-editor, and University of Otago law professor, Jacinta Ruru says these are people who have achieved notable success in their fields, winning awards and prizes.

"But they are not finding a home in that discipline to be able to teach and to research," she said this week.

At issue is the reluctance of institutions to allow Maori academics to carry the matauranga Maori attached to their whakapapa with them, when they enter the academic world. So, the book is an effort to provide an insight into matauranga Maori, Maori knowledge, Prof Ruru says, and highlight the opportunity to be inspired by it as a country.

"I think the book is about our love for our disciplines, our hope for the future but also a real hurt and struggle in that day to day, working within a university system."

Writing in one of the chapters of the book, Prof Linda Waimarie Nikora says Maori pursuing careers in the academy will face bigotry, arrogance, racism, exclusion and marginalisation.

"This is not because we work with bad people, we simply work with people trained in a particular way of knowing and seeing," Prof Nikora, who has also co-edited the book, writes.

Like several other contributors to the book, Prof Nikora now works in a Maori studies department, having started out in psychology but found the culture there limiting and alienating.

There has been a growing awareness of matauranga in recent years, Prof Ruru says, including the Prime Minister’s chief science adviser, Dame Juliet Gerrard, who has declared an interest in recognising and elevating matauranga as a source of knowledge.

The Deep South Challenge has a Vision Matauranga science programme, the Royal Society is taking notice and the New Zealand Science Review recently dedicated space to the interface between matauranga and science.

And yet, there is much that remains to be done, Prof Ruru says.

The barriers to integrating matauranga into university systems include institutional racism, and structures, decision making and processes that prioritise Western knowledge, she says. While some Maori content might be added around the edges, there is little in the way of a strategic intent or commitment to develop that — a situation now some decades old.

The situation contributes to the fact that the number of Maori employed in the tertiary sector has remained static at about 5%, or fewer, Prof Ruru says.

It remains common for Maori students to complete degrees without ever having a Maori lecturer in front of them. There’s an absence of role modelling.

Leadership continues to exclude Maori. None of the country’s universities are led by Maori, while at the University of Otago only one member of the vice-chancellor’s advisory group is Maori, she says, and that’s the director of Maori development.

Another chapter in the book is contributed by Assoc Prof Ocean Mercier, whose research as a physicist took her all the way to the Antarctic ice, on a project with the late Sir Paul Callaghan, but who also ultimately opted for a home in a Maori studies department, at Victoria University of Wellington.

"I had become a handmaiden of a particular type of science," she writes in her chapter, reflecting on her belated awakening to Western science’s ties to empire, capitalism and colonisation.

"Since 2004 [when she became involved in Victoria’s Maori studies] I’ve been involved in richer social discourse around science that opens its arms to matauranga, as opposed to hierarchical notions."

Assoc Prof Mercier’s experience repeats that of other writers, whose commitment to matauranga has been accommodated at the margins, at best, while they are simultaneously called upon to take on extra duties as a result of their cultural literacy.

Among its recommended actions are to "enhance the contribution of research and matauranga Maori in addressing local and global challenges" and "support the advancement of Maori-led and matauranga informed solutions".

Prof Ruru sees it as another good sign, but says it will need to be followed up.

"I think this book shows that all of us writing, as Maori, our experiences, as Maori — there’s a lot that these tertiary institutions need to do to fulfil that strategy. We have a long way to go yet."

Prof Ruru herself maintained a vigil as a "lonely only" Maori in her faculty, law, at the University of Otago for 20 years — until just last year.

Her research includes bi-jural legal systems, incorporating Maori and Western approaches side by side.

Recently, a national group of Maori academics in law have been working on a bi-cultural approach to teaching, incorporating bilingual teaching and teaching of bi-jural systems: "Where our students recognise and learn of and be inspired by our law that’s inherited from England and also our law that has come from Maori, so a real recognition of two legal systems operating in New Zealand."

It is not about changing everything, Prof Ruru says.

"It is very much like an and-and approach, we are really wanting to add on to what’s already happening, a Maori perspective, a Maori knowledge base. Our country needs this, our professions need this."

A tertiary system should be about learning about the best around the world, and Maori is a firm part of that.

The conclusion Prof Mercier, a Royal Society award winner, came to was that physics was not a welcoming place for Maori and Maori ideas.

Prof Joanna Kidman provides further context in her chapter of Nga Kete Matauranga, recalling the role the New Zealand education system played in the 20th century beating te reo Maori out of its pupils, pushing the language to the brink of extinction.

Her focus as a sociologist is on retrieving what has been lost.

There are further pressing reasons why an openness to matauranga Maori would pay dividends, Prof Ruru says.

"Particularly if we are thinking about some of our biodiversity crises in the country, our water crisis and so on."

A Maori or indigenous world view prioritises interconnections, it recognises that how we treat the environment and how we treat each other are linked and both impact health and wellbeing.

"That Maori understanding of our connections, Maori would talk about that whakapapa, that connection to one another and the environment and so on, that whanaungatanga, which is the idea of the glue that holds the world together.

"I think some of those ideas are really important for us as a country to move forward with."