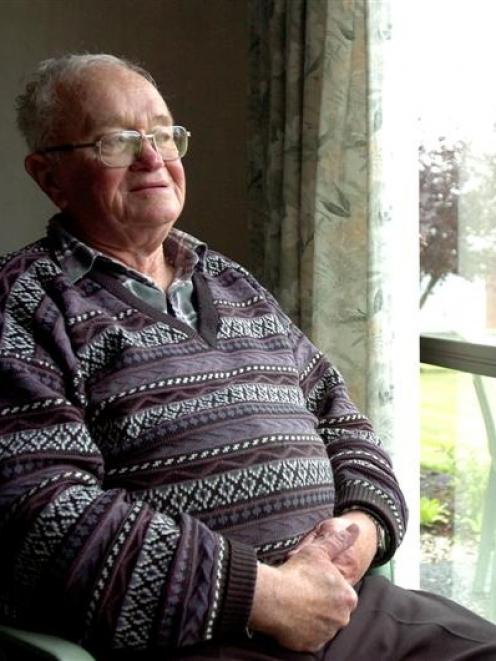 Vincent Wright. Photo by Linda Robertson.
When Dunedin man Clem Wright died a virtual recluse, his stepbrother Vince claimed he was one of many former foster children whose lives had been ruined by abuse. Vince Wright vowed to tell their stories and as Foster Care Awareness Week draws to a close, he describes what he found. Kim Dungey reports.

A former foster child says few who grew up in the system in the past emerged unscathed. Vince Wright (79), of Mosgiel, first went public with his concerns in 2006 after burying his stepbrother, Clem.

Mr Wright was raised by loving foster parents but Clem Wright lived in 14 homes in 14 years, suffered from rickets and was attacked by his foster parents with a stock whip.

Convinced that situation was not unusual in New Zealand in the 1930s and 1940s, Mr Wright sought stories of others in the area who had been fostered.

These showed that many of them had problems maintaining lasting relationships, he said.

Many of the girls later spent time in mental hospitals while many of the boys became alcoholics.

As he had suspected, the accounts also showed that some children were taken in solely for money - there were at least six "child farms" in Mosgiel - used as cheap labour and abused physically.

Neighbours complained but the Child Welfare Department was legally obliged to tell foster parents when it would visit and by then, "everything in the garden was rosy".

Another contentious policy with those he interviewed was returning foster children to their birth parents, a practice he had objected to when he was a teacher.

"They're still doing it and it's utterly crazy. In some cases returning them to their families is important but in a lot of cases it's quite traumatic."

Mr Wright recorded the stories of nine people who had been foster children or parents since the 1940s, but spoke to dozens of others who wanted to forget their past and did not want their stories published.

"Mary" lived in what was one of the worst "child farms" in Mosgiel, he said.

When she and the other foster children got home from school, they had to go to a shed, until they were called to the wash house, where they stayed until tea time.

They slept on an open porch and when they needed to go to the toilet, they scratched a hole in the ground and used rhubarb leaves as paper.

Her foster mother often kicked her, sold the extra butter rations she received on the black market, and took the clothes and Christmas presents provided by the Department of Welfare for her own nieces and nephews.

"Susan" was hit with anything that happened to be at hand, including a jug cord and riding crop, and was sexually abused by a boarder.

"Marjory", born in 1978, also suffered sexual and physical abuse, spending her fifth birthday in hospital with two black eyes and bruising. Her experiences left her suicidal and unable to form relationships.

In her poems, she wrote of not wanting to be a "client" but a person, not wanting "residential placement" but a home, and not wanting "programmes" but to do "meaningful, productive things".

"I want to learn things I like to do. I want to enjoy life and have friends. I want the same as everyone else."

However, Mr Wright said there were also positive stories like his own.

His foster parents did not send their biological children to high school but supported him in everything he did, including his desire to train as a teacher.

"Could anyone be any luckier than I was?"

Although he could not afford to publish the stories, he felt a responsibility to tell them because the others - whom he called the silent majority - did not have the same opportunities he did.

"I've felt guilty for a long time because I got the chance of an education but a lot of those other kids didn't. By the time they reached 14, they were out of school, irrespective of how clever they were. They had no way of expressing what happened to them."