There’s a click and a rattle and a third sound, for which we may have no language, delivered to our ears via a set of headphones.

Otherwise it is still and quiet. Just these three sounds uninterrupted, perhaps in communion, perhaps not.

Above water, there is the excited song of the birds and in the low background the self-important grumble of a town, with its chauvinistic horns of activity. Both now seem overblown. Unnecessarily boastful and baroque, in the case of the birds, and a muddy pomposity in the case of downtown Dunedin.

But then comparisons are odious.

And indeed, Suus Agnes Claessen’s purpose in sharing the music of the pond to which we’ve been listening has nothing to do with competition. Rather it is about inclusion: if an inventory is to be made, these clicks and rattles — and however we decide to describe that third sound — should be regarded too.

The mushroom people, collage, by Suus Agnes Claessen.
We are squatting by a pond about halfway up Signal Hill. Claessen has dropped a hydrophone into it to eavesdrop.

There tends to more to hear in the late afternoon, she says. And at night, the song of frogs.

Under the warm sun of late morning, there are no frogs to be seen. But there is a busy community of boatmen just under the water’s surface, pulling at their oars. On the skin of the water something appears to be hatching. It might be emerging from an egg. It looks a vulnerable moment.

The clicks and rattles might be the boatmen’s work. After all, the lesser boatman is said to be the noisiest of all animals, pound for pound. 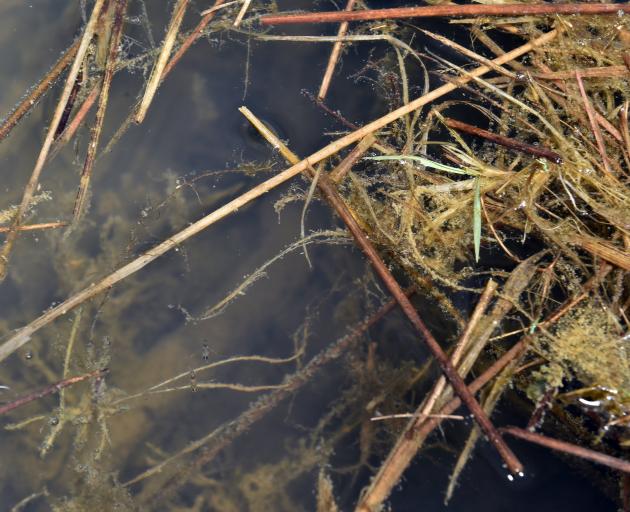 The pond.
Claessen’s interest in pond symphonies and nature’s chatter is part of her PhD studies, which she is completing at the University of Otago’s Centre for Sustainability. Hers is a unique project for the centre, combining as it does art and science.

Her topic is "cultivating affective ecologies for unloved biodiversity through visual narrative". The project is to find ways to displace humans from the centre of our own universe so that we might "become more attentive to other ways of being in the world, where everyone [or everything] is ecologically entangled".

In order for us to arrive at that point, we have to notice the other "unloved biodiversity" around us; even the "low" life, the quiet life, "unloved microcommunities: invertebrates, moss, and fungi".

Claessen, an author-illustrator and comics artist, is communicating this work in the form of a graphic novel but has also enlisted others in the task.

Among the questions her research is addressing is "what does it take to capture the human imagination?". The question is being investigated with the help of schoolchildren from around Dunedin, including pupils at Purakaunui School.

They have been equipped with insect hotels and asked to respond to the goings-on of the inhabitants with cartoons.

"It is good fun, most kids were really into it and excited about it," Claessen says.

The uncomplicated access they still have to their imaginations means we can learn from them, she says.

"I also want to just encourage them to keep noticing and keep expressing themselves like this. Because it is very valuable, it is very open to the natural world, very attentive." 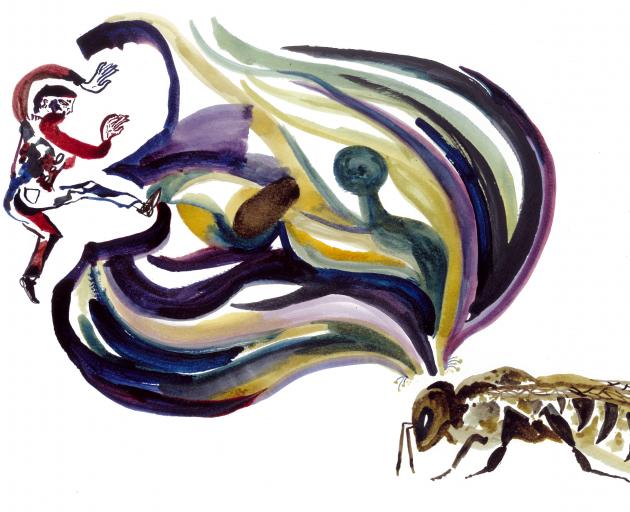 Enter the bee dream, by Suus Agnes Claessen
The children are telling all sorts of stories with their cartoons.

"Some of them are quite realistic, actually. Other ones are complete imagination. They are often stories considered from an individual spider or ant, rather than them as a generic group, which I also think is really cool. For example ... there was one really cool one about the doom of the vacuum cleaner."

There are also tales of great underground parties.

Claessen says she had a fascination for invertebrates from an early age, but growing up in urban Holland was not conducive to developing it. That changed when she moved to New Zealand.

"I moved to New Zealand because I was interested to come here to really develop a relationship with nature, because I felt that wasn’t really happening in Holland."

Here, she became interested in gardening, and honeybees, and then the myriad bees and flying insects engaged in the service of pollination.

"In my art I am interested to talk about why certain organisms are important, because there are so many roles that they fill. But also I am very interested in them as beings in their own right. There is a lot of recent research that is really interesting and can help with that perspective. Things that suggest that bees and other insects are a lot more intelligent and aware and responsive and alive than we have given them credit for."

For example, Claessen talks about observations that some orchids appear to trick bees with mimicry, to attract their attention. But casting the bee as the dupe potentially ignores its experience of shape and the smell, textures and colours.

"They have their own aesthetic experiences almost, in some form that we can’t really understand."

If that sounds dangerously close to anthropomorphism, Claessen is aware of it. She thinks about it a lot.

"I always walk this fine line between ecological knowledge and imagination. I do not think of them as opposites because both are just attempts at trying to interpret our surroundings and being open to them. Maybe you get it wrong, but I think we can never know for sure what it is like to be an insect, so we have to rely on imagination."

Much of Claessen’s art is in waterbased inks. It allows her to create fluid expressive lines, she says, which helps with more fluid thinking.

"In that way it is more playful, maybe there is a bit of a blur between species boundaries as well."

Water also connects us, she says. We are water, we need water, we came from water, and invertebrates and bryophytes — small plants like moss and liverwort — were some of the first organisms that moved from the water to the land millions of years ago, eventually enabling larger organisms to evolve, like us.

The small organisms of the pond still need wet or damp places to live and Claessen’s watery paintings provide that.

She also works with collage.

"I find it interesting because you use shapes and from small shapes you create a bigger shape, a bigger image. It is a way of enacting the world. Everything is made by building bigger things from small things." 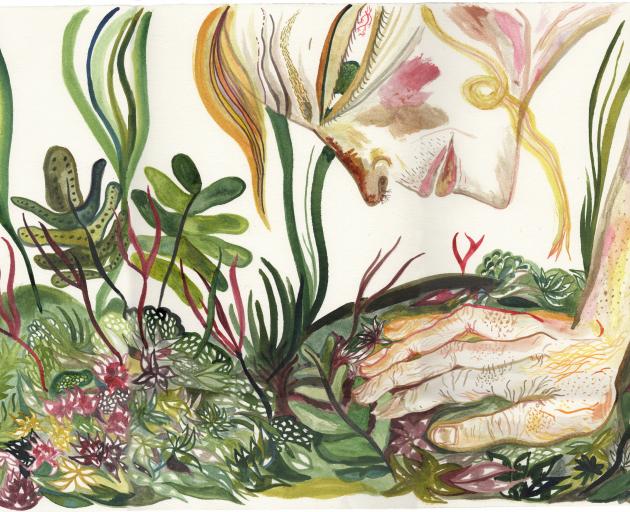 Noticer
The work is often colourful.

"I think that helps with creating an image that is not creepy or less creepy."

It is all in the service of understanding and connecting. Providing language where language struggles.

"We have more than words alone. Words can also help us a lot but there are other ways of knowing — visually, or in this case also using sound. Other ways of noticing and thinking and showing."

There is certainly a political component to all this, a process of challenging and upending the orthodoxy that our species sits atop the pile, a paragon of evolution.

An alternative view is that we are completely dependent on these other smaller organisms, Claessen says.

"And they are ancient; they have been around for a lot longer. Maybe they will also outlive us. I am really interested in this idea of humility, I guess."

Then there’s the value of noticing for its own sake.

"This kind of close listening and looking and watching, it is a really slow process and it is almost like a meditation, an aesthetic experience. It is almost religious, I think."

It is a way to enjoy this other life and respect it.

"I came across a piece of research that suggests certain insects may be able to dream and I thought that was just so wonderful. I think ‘what would such an insect dream look like?’. That is also a story that I have been working on."