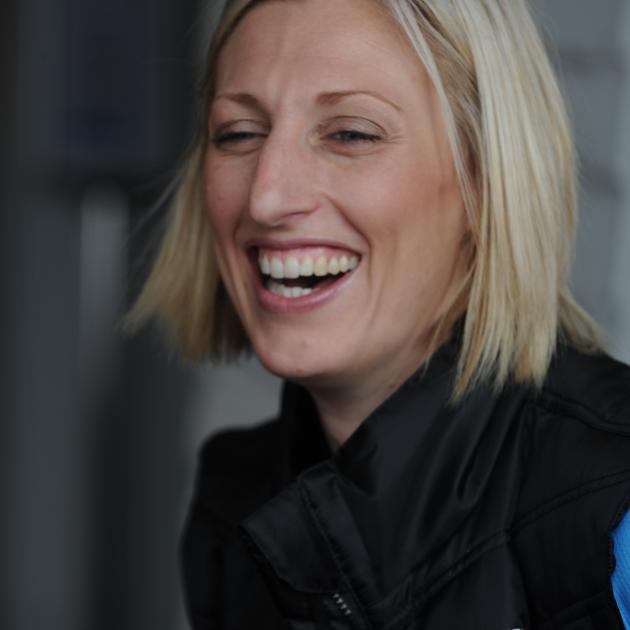 Former Otago Rebels and Southern Steel defender Demelza Fellowes has a giggle with a reporter in 2012. PHOTO: CRAIG BAXTER
Former Australian defender Demelza Fellowes briefly made her home in Dunedin and played for both the Otago Rebels and the Southern Steel. Reporter Adrian Seconi catches up with self-described "stage-five clinger" and "out-there Aussie".

Demelza Fellowes is always a second or two away from delivering her next gag.

Very few topics are taboo but her favourite target is the 40-year-old former Australian defender who briefly called Dunedin home.

She loves a good laugh at her own expense.

Perhaps the best examples of her devilish humour stem from some of her darker times.

The potentially morbid story about her slipping in the shower, cutting her back open and nearly bleeding to death was spun into something, well, hilarious.

"I did ask the surgeon for plastic surgery, as in breast implants. I told him I'd done all the incisions and all he needed to do was put the silicon in," she told the Otago Daily Times shortly after arriving in Dunedin to play for the Steel in 2012.

In that same interview she described herself as "a bit of a tart'', when asked about playing for four teams in five years.

There have been a couple of marriages without the happily-ever-after which have proven to be rich material as well.

"[Husband No 2] wasn’t around long enough to go on the Wikipedia page," she joked.

That's Fellowes — always laughing. She charmed her team-mates with her sense of fun when she arrived in Dunedin in 2007 to play for the Otago Rebels. 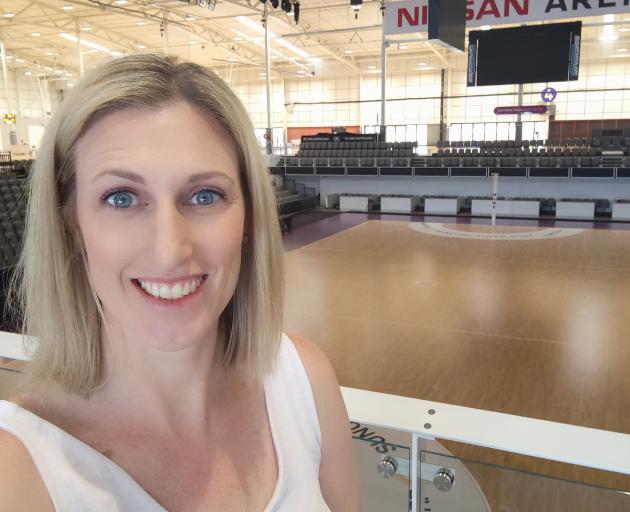 Fellowes at her new home venue in Brisbane. PHOTO: SUPPLIED

And that sanguine outlook came in handy when she returned in 2012 to play for the Steel.

She put down roots of sorts the second time around. She bought a house — "The Lair" — which she held on to until about three years ago.

It is a time in her life she reflects on with great fondness.

The Rebels were lucky to get her, really. Fellowes had made nine appearances for Australia and was seemingly well ensconced with the Adelaide Thunderbirds.

But she sensed a charging of the guard and jumped. Initially she had hoped to head to Queensland.

There were no openings but she got a hot tip instead. Try New Zealand, they said, and so she rang Jodi Brown (nee Te Huna) who put her on to the Otago Rebels. 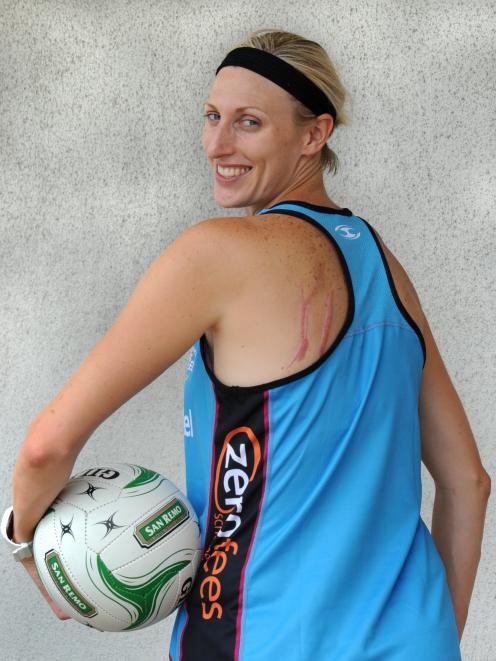 Fellowes shows off the scars which remain after she fell in her shower in 2011. PHOTO: JANE DAWBER

As it turned out, Brown was about to make the move south to play for the side as well.

When the National Bank Cup was replaced by the ANZ Championship the following year, the Otago Rebels were disestablished and players went in different directions.

The Tactix were a kind of a pseudo Otago team for a few years and got some love despite the Steel actually being the local team.

But that first year with the Rebels made quite an impression on Fellowes.

"I just remember how much character we had in that group and how much I loved it.

"It was my first foray at living overseas and I loved the community and the family feeling in Dunedin.

"That is where I established my 13-year friendship with Anna Thompson and Phil Finch and Jodi.

"Even watching Katrina Rore and what she has done and how she was my defensive partner back then. We just had so much character and personality.

"Sometimes I think if I knew what the next 13 years were going to be like I would have loved to have had a different mindset around where my career was going.

"But it led on to some beautiful things. I went straight to the Tactics the next year and just continued that love affair with New Zealand.

"Dunedin was the perfect place to be initiated into Kiwi life.

"Unless you really know the city you will never know its magic and how beautiful it is. And what a lifestyle — everyone is your friend."

Fellowes arrives in Dunedin to play for the Otago Rebels in 2007... CRAIG BAXTER

It was a tough campaign for the Steel. The side won two of its first three games before losing 10 in a row.

Fellowes ended up bouncing back to the Tactix in 2015 and retired at the end of the season.

"I retired 50 times but officially it was in 2015, at the end of that season with the Tactix when we finally won a game — we beat the Magic. That was bloody great."

The couple had married in Christchurch but the union unravelled and Fellowes returned to Australia and got a job with the Melbourne Rebels in the commercial team.

"I fall in love every five minutes and I joke with my family there are so many wedding styles I haven’t done yet. I’ve done destination, I’ve done intimate but I haven’t done the sit-down royal wedding, so maybe that is next.

"But I’m blessed. I have so many nieces and nephews and my netball career has been amazing and my working career is enormous and I feel really lucky in it."

After a couple of years with the Rebels, Fellowes accepted a challenging role with Fiji Rugby in Suva as the marketing and sponsorship manager.

"It was so full-on but it was great. I’m a six-foot-two highly extroverted, blonde, out-there Aussie and they didn’t know how to take me [initially]. But I just loved it there and I really thrived."

In March, when Covid-19 arrived, Fellowes returned to Australia and lived with her family in Victoria.

Victoria enjoyed about three weeks of freedom in July but was otherwise in lockdown from late March until late September.

Fellowes continued to work remotely for Fiji Rugby until it was forced to let her go in September.

"I think it has worked out for the best. They would have lost so much money keeping me on. It is sad because I did really thrive in that space."

Fellowes was not unemployed for long. She worked her networks and is now running the Hart Sapphire series for Queensland Netball.

It is the premier netball competition in the state and she is excited about helping lift its profile.

But Dunedin and her friends on this side of the Tasman remain close to her heart.

"I’m a stage-five clinger so no-one gets to cut me off that easy. I would talk to the guys or hear from them once every couple of months.

"And I can’t wait to go back and sit at St Clair sipping coffee and being fabulous, or getting a chocolate brownie somewhere or a nice warm Speight’s."