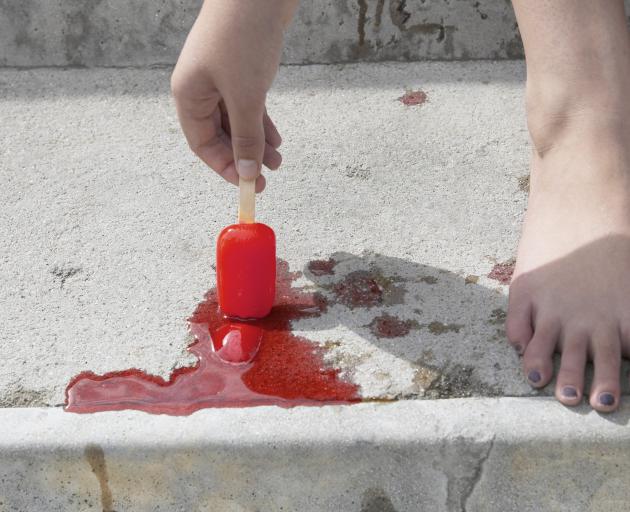 As the long school holidays draw to an end, Summer is left wondering if Fin even knows she exists in the first part of Paper Butterflies, by Kura Carpenter.

The sun is high overhead. I sit on the bus bench, shaded by the corner dairy, and bite half-moons in my raspberry ice block. ‘‘Does Fin ever talk about me?’’

Beside me, rolling a Mackintosh’s toffee between his teeth, Darren replies, ‘‘Nope.’’

‘‘Oh . . .’’ I sit back, the brick wall of the dairy digging into my spine, and stare into the cloudless sky. What would it be like to rise up and touch the bright blue high above? Would it feel cold and sharp like a river? Or maybe cool and soft like the underside of a pillow.

Along the street the windows of the sagging terrace houses have been pushed wide open to entice a breeze, but today they will only capture the heat rising from the footpath in shimmering waves. The lack of fresh air makes thinking hazy. People slouch motionless on their front steps while the creeping click of cicadas in the Town Belt drones on and on.

From somewhere down the street a stereo blares a Guns N’ Roses song, Sweet Child ’O Mine, into life. Like the insects’ rasping chorus the song promises endless perfect summer. But nothing lasts. Today is the last day of summer for us. School starts tomorrow.

Fake raspberry flavouring drips down my ice block to form red rivers between my fingers, and threatens to spill over and stain my skirt. I lick up the sticky trails running down my hand and wrist and take small bites to make the ice block last.

The toffee in Darren’s mouth pushes up against the side of his cheek. I think he regrets his choice. The sugar will be saturating his mouth, coating his teeth, and feel like a leaden weight on his tongue. Darren elbows me in the side. ‘‘Truth or dare,’’ he says, while his eyes remain fixed on my ice block, vanishing in bites of icy cold bliss.

Darren’s eyes lift from the ice. His lips draw together and he spits the toffee out into the gutter. It lands among broken glass. He smiles. ‘‘Dare. You have to kiss me.’’

‘‘No! Why would I?’’ Darren looks away, drags his feet over the pocked footpath, scuffing circles in the dust and pebbles with the toe of his sneaker. ‘‘Anyway, I was kidding.’’ He nudges me again in the ribs. ‘‘Shoulda seen your face!’’

The still air stirs as a beat-up Ford drives by the dairy. The car slows at the intersection to idle at the traffic lights, heat and fumes spilling out of the rusted exhaust. The driver flicks a cigarette butt out the window. The lights change and the car speeds away, leaving a curl of tobacco smoke hanging in the air. I breathe deeply. ‘‘Love that smell . . .’’ I suck the raspberry dripping from the ice block corners, then tell Darren, ‘‘Tobacco and movie popcorn are my favourite things from this summer.’’ I take another bite, let the cool ice slide down my throat. ‘‘Think I’ll add raspberry to the list.’’

Darren reaches into his jeans pocket and draws out a crumpled cigarette. He sets the cigarette to his lips then snaps his fingers. A single spark flies from his right hand.

‘‘Quiet, Summer,’’ he says, ‘‘I gotta concentrate.’’ He tries again. Another finger snap. Another feeble spark. The strain on his face increases. I giggle and he drops the cigarette to the footpath and grinds it under his sneaker. ‘‘Let’s see you do better,’’ he says, ‘‘if you’re so powerful.’’

Darren crosses his arms. ‘‘I dare you.’’

I watch the melting ice block. Cool red coats my hand. ‘‘All right.’’ I lick up the raspberry. ‘‘Twist a toffee wrapper in half for me, into a bow.’’

He gives a half-hearted shrug, but unwraps a toffee from the bag and twists a wrapper between his fingers. I hold my free hand out and he places the paper twist in the cup of my palm. Curling my fingers over the shape, gently, so not to crush, I raise my hand to my lips.

I wait. Feel the rhythm of my heartbeat. Da-dunk da-dunk. Open and shut. Open and shut. My heart spills life into my chest, flowing like rivers through my veins. A sweet taste like ripe summer fruit rises in the back of my throat. Then I breathe a long soft curl of life’s breath into the closed circle of my hand and whisper a single word.

Darren slouches on the bench but his eyes follow my hand. Waiting.

The paper stirs, a tiny flutter like eyelashes against my skin. I unfurl my fingers. The wrapper emerges from the chrysalis of my hand, now a paper butterfly. The wings, marked Mackintosh’s, are pressed together like hands in prayer. Darren sits up straight, leans over the tiny life form as the fragile wings open and close.

‘‘You try. It’s dead easy,’’ I say, setting the butterfly on my shoulder where its flapping wings brush against my hair and tickle my neck.

Darren selects a toffee from the bag. He smooths out the waxy wrapper then twists it in half. ‘‘What’s the magic word?’’ he asks, pinching out the wing shapes to his satisfaction.

His brow creases, as if I’ve tricked him, but the moment passes and he repeats my actions and breathes into the well of his hand, ‘‘Butterfly.’’

I lean close, watch his hand open. Darren’s butterfly twitches. The wings open once and then it rolls over, flat on his palm. The butterfly does not move again.

‘‘Magic’s dumb,’’ Darren says. He snaps his fingers shut about the lifeless butterfly and stuffs it in his T-shirt pocket. At the traffic lights the crossing signal judders through the air. I sweep my long hair over the butterfly on my shoulder to hide it, but when I see who it is I relax. Fin and his little sister Becky cross the intersection. Their progress is slow through the hazy heat. Fin has a towel about his neck and Becky drags a fat bag by the strap along the asphalt.

‘‘Hi, Fin,’’ I call as they walk up. I tuck my hair behind an ear so they can see the butterfly I made. Fin smiles. His grey eyes make me think of sunlight reflecting off the ocean. Darren suddenly wraps his hand over my hand still holding the ice block stick. His hair brushes my cheek as he whispers in my ear, ‘‘Too slow.’’ And he steals the last bite from the ice block.

‘‘Darren, that was mine!’’ I tell him off, but I laugh and sneak another look at Fin.

Clasping his hands behind his head, Darren rocks back against the wall and sighs, ‘Bliss . . . sweet strawberry bliss.’

‘‘It’s a joke,’’ Darren says with a wink and I see Fin is scowling. Fin is allergic to strawberries. I shrug. Darren has a strange sense of humour.

Fin’s real name is Quinn but, like a fish, he would spend every moment swimming if he was allowed. Becky would not. Becky has Earth magic. In the water she is like a stone. She sighs as she scoops up her bag.

‘‘Do you guys want to come to the park with us?’’ I ask. Becky always wants to go to the park.

Becky turns to her brother, appealing can-we? with her eyes.

‘‘Darren can go to the pool with you,’’ Becky suggests to Fin, and it’s my turn to scowl as she ruins my invitation, ‘‘and you can fetch me from the park on the way back.’’

Fin hesitates. ‘‘But Mum said I’ve got to look after you.’’

‘‘Summer’ll look after her,’’ Darren promises on my behalf.

What is he up to?

‘‘All right,’’ Fin says, not meeting my eyes, and shrugging as if he doesn’t care either way. He stares at the footpath and toes the broken bottle in the gutter.

‘‘You can take my towel,’’ Becky offers Darren. ‘‘It’s stripy, not girly,’’ she reassures, already unzipping the bag.

‘‘Nah, my house is just down the street,’’ Darren replies. ‘‘I’ll get my stuff, meet you there.’’ Still studying the footpath, Fin nods then wanders off up the street. Darren passes me the bag of toffees. ‘‘You want these?’’

Darren stares at me for a moment. ‘‘Sure. Later.’’ He sprints off.

The cotton of my skirt clings to my legs as I stand up and throw my ice block stick in the rubbish bin. I frown at my sticky hand. Maybe the ice block wasn’t such a great choice. The toffee wrapper butterfly flits off my shoulder and starts to circle the bin. Maybe it thinks it’s a wasp.

Paper Butterflies features in Beyond the City Limits, an anthology presenting short stories with a Dunedin setting.