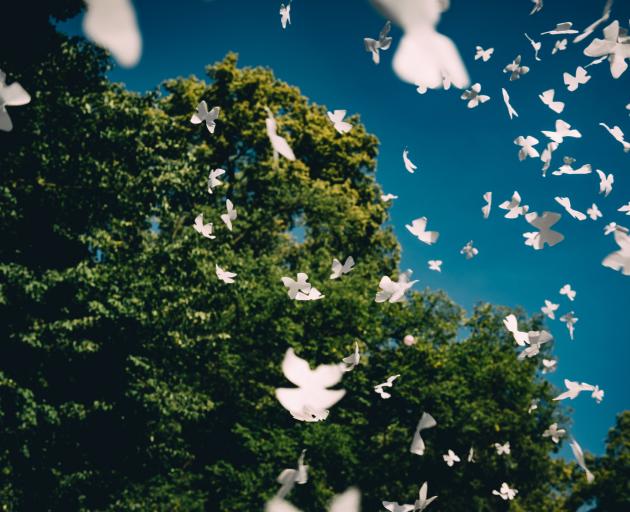 Photo: Getty Images
Summer finds her admiration of Fin’s ‘‘water magic’’ may be misplaced in the conclusion of Paper Butterflies by Kura Carpenter.

Becky points down. I am standing on a crack. We laugh and walk on up Arthur Street to the playground, where Becky kicks off her sandals and rubs her bare feet over the stubby brown grass. We drag her bag up next to a giant old conifer, seeking the shade under its low-hanging branches. The hard-packed dirt under the tree is riddled with deep cracks. Becky places her hand on the knobbly bark of the tree and breathes deeply. Her small shoulders round like all the tension in her body has drained away. Like she has not been able to breathe properly until this moment.

‘‘Gonna go wash my hands,’’ I say, and wander over to the water fountain next to the tennis courts. No-one is playing tennis today.

The cool water runs over my hands, washing the sticky raspberry colouring away, and it spirals down the drain in pink trickles.

‘‘Are you going to marry Darren?’’ Becky asks when I return.

‘‘But aren’t you Darren’s girlfriend?’’

‘‘Where’d you hear that?’’ I tip Darren’s toffees from the plastic bag into my lap. I glance over my shoulder to make sure no-one else is around and then unwrap a toffee. I breathe life into the paper then gently place the butterfly on the grass and set about turning all the waxed wrappers into butterflies.

‘‘So pretty! Wish I could do that.’’ Becky laughs as the butterflies dart about us, land on our shoulders, our hair, or cling to the tree bark. Drawing her knees up, she hugs herself. ‘‘It tickles us,’’ she says, her back pressed against the tree. She cocks her head to one side, as if listening to something. ‘‘We want a drink,’’ she says, pushing herself to her feet.

Becky and I soak her towel in the water fountain and then wring it out under the towering old tree, over and over, squeezing the quenching water down the cracks in the ground. When the surface of the rock-hard dirt has become slick clay, Becky drops the towel in the dirt and sticks her toes in the mud and smiles. I keep to the dry grass, lie on my stomach, and watch black ants investigate a toffee I place on the ground.

The crack of a rolled towel being whipped through the stuffy air alerts me and I sit up, first to realise the boys have returned. Darren spies us and runs up the slope. Fin doesn’t race but walks slowly, a scowl on his face. Darren plonks himself down next to me with a phew! of chlorine scented air.

‘‘Well? Did you ask?’’ I poke the toffee and watch the ants dancing around in panic.

‘‘The thing is,’’ Darren picks at blades of grass then glances across at Fin standing over Becky while she straps her sandals on her muddy feet. ‘‘He thinks you’re . . . stuck-up.’’ Darren combs his tanned fingers through his wet, black hair. ‘‘I told him it’s not true, I told him you’re cool.’’

‘‘Fin’s a great swimmer,’’ Darren continues, sounding impressed. ‘‘He raced these older guys, they musta been 16 — beat them easy.’’

I am starting to think Darren doesn’t know Fin is a Water Elemental. ‘‘You know Fin’s got Water magic, right?’’ I say quietly. The ants fan out. They can’t find the toffee even though it’s just a foot away. ‘‘He can make the water move him as fast as he likes.’’

Darren’s admiration wavers. Water drips from his fringe. ‘‘But that’s kind of like cheating . . .’’

Fin picks up Becky’s sopping towel covered in mud and snaps at me, ‘‘You said you’d look after her.’’

Why’s he mad at me? ‘‘Yeah, and I did.’’ Stretched out on the scratchy grass, I start to squash the stupid ants.

Fin steps over me. Whap! His fist smacks Darren on the cheek. They go down in a pile of spinning fists. Becky shrieks. I scrabble out of the way.

Fin pins Darren, squashing his face into the earth. They are both bleeding, Fin has a cut lip and Darren’s nose drips a bright red trail down his chin. Blood spills on to the mud. Coats the cracked earth.

Lip split open, clothes stained with earth, Fin blinks up at me from the dirt. He shakes his head, as if he can’t quite hear me, and then releases his hold.

Shrugging Fin off, Darren gets up. He grabs me, crushes me close and kisses me, right on my lips. Chlorine fills my lungs. My heart beats. Da-dunk da-dunk. Open and shut. Open and shut.

He lets me go and looks down at his T-shirt pocket. Something is moving inside. The crushed toffee wrapper butterfly is still in there. The butterfly squirms free and clings to the lip of the pocket. One wing is bent in half but they flap, open and shut, open and shut.

I place a hand to my stinging lips, where I can still feel Darren’s kiss. My fingers come away sticky, coated in blood. The paper butterfly lifts off from his shirt into the sky. ‘‘But . . . how’d that happen?’’

Darren wipes the red trail still dripping from nose to lip and smiles. His brown eyes are deep, like cracks in the sun-soaked earth. I breathe in his scent and add chlorine to my summer list while somewhere above us the butterfly spirals up . . . up . . . up . . . C’mon,’’ he says, hooking my hand in his, ‘‘let’s go. The park is dumb.’’

‘‘Wait.’’ I shade my eyes, searching the sky for the butterfly, wobbling on bent wings, rising up into the last day of summer to touch the endless blue. But I’m too late, it’s already moved on and I didn’t see.

Paper Butterflies features in Beyond the City Limits, an anthology presenting short stories with a Dunedin setting.