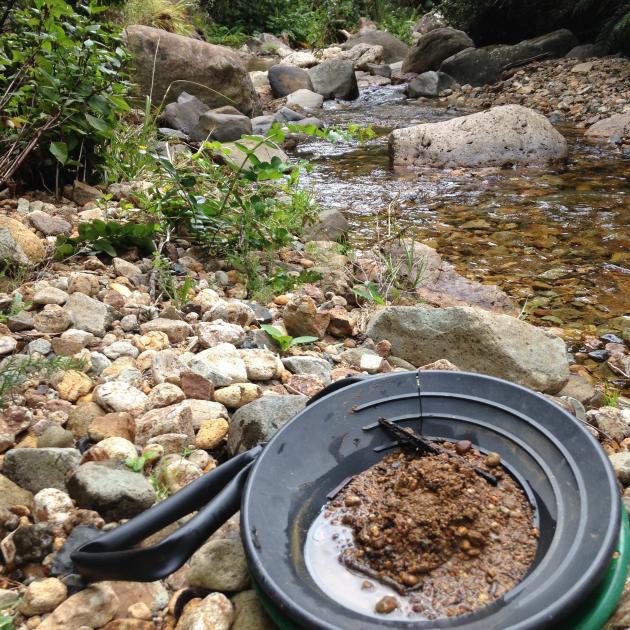 Gold-panning, Coromandel. PHOTOS: ELEANOR HUGHES
First discovered in 1852 at Driving Creek, just north of where Coromandel Town stands today, gold has left behind a rich history and remnants of its mining dot the Coromandel region.

Eleanor Hughes sets out from Coromandel Town to follow in the footsteps of the gold miners on a road trip, winding south to Thames, where the first big strike was made in 1867, and on through Broken Hills and Karangahake Gorge to finish in Waihi, where mining continues today. 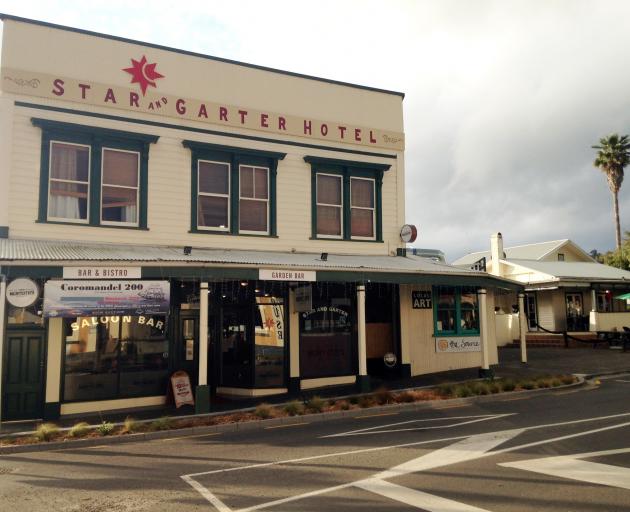 The Coromandel School of Mines Museum is accommodated in the original School of Mines, dating from 1898. Along with viewing artefacts from kauri logging days, photographs of settlers, household items and tools dating from the late 1800s, learn of the area’s gold history at the reconstruction of Success Mines entrance, complete with wagon and mining tools. A video shows the conditions in which miners worked.

Back towards town, glance in at Coromandel Top 10 Holiday Park. The quaint cottage used for reception was once the Hauraki Mining Company’s office. The streetscape of one-storey, verandaed buildings on the main road takes you back in time. Wander past the Star and Garter, initially a lawyer’s office where many mining claims were signed, and the Assay House — originally the BNZ Bank, which is named after the brick buildings used as assaying facilities that stood behind it — and down to the Admiral Arms Hotel which has operated since 1872, one of around 17 hotels in town during the gold rush.

Why not leave Coromandel with your own gold? Hot Rocks Adventures has panning tours in a local river where you can learn all about the Driving Creek, Tokatea and Hauraki Hill mines. 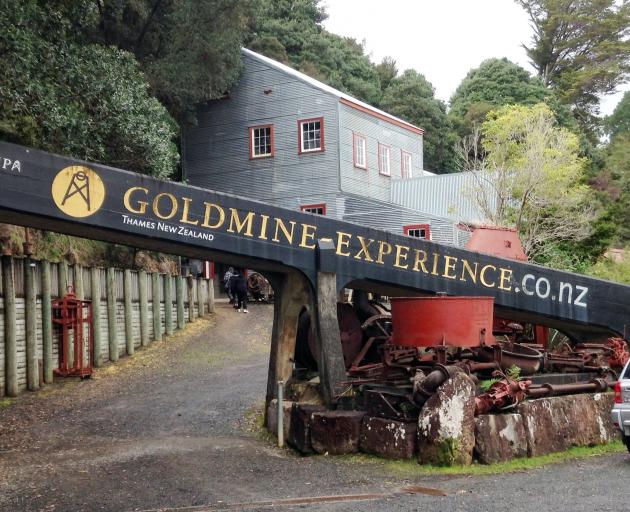 Heading south on winding, coastal SH25 gives views of the Firth of Thames. Just before Thames, a black-painted water race, which supplied water to stamper batteries during the gold-mining era, announces the Goldmine Experience. The tour through the Golden Crown Mine tunnels here, where a figure pushes a wagon along wooden rails in darkness and another chisels the tunnel wall, gives an idea of mining life. Back out in daylight, see the restored, deafening 19th century stamper battery in action and discover how gold particles were separated from silver and iron to become ingots. There is lots of machinery, an audiovisual display on the beginnings of Waihi’s Martha Mine and historical photos of Thames, too. You’ll find recreations of huge flywheels and the original pumping quadrants still in place over a mineshaft at Bella Street Pumphouse, which pumped water from the gold mines. A photographic display of the town in its heyday, plans of gold mine locations and a working model of the pump and mineshaft make it worth a visit.

Take a guided tour of the Thames School of Mines, where the old classroom and laboratory are portals to the past. The school was opened in 1886 and closed in 1954, desks and chairs remain facing the blackboard, walls are lined with shelves of glass bottles and jars of solutions, old Bunsen burners and gas taps await use. Scales and tools used to test gold content remain in the assaying room. The Mineralogical Museum, built in 1900, houses hundreds of labelled rock specimens in a room in 1950s decor of pale blue, green and pink. Outside is a cage that used to transport men down into a mineshaft. 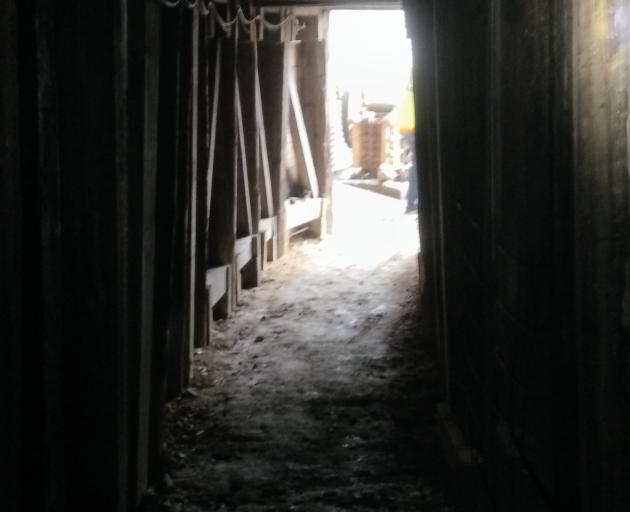 A mineshaft with kauri struts at the Goldmine Experience, Thames.
Still referred to as Grahamstown, one of two towns which amalgamated about 1874, Thames’ northern end is scattered with gold-era buildings. Take to the streets to discover the A&G Price Ltd foundry — a huge corrugated iron and weatherboard structure where gold-mining equipment was manufactured — grand, two-storeyed hotels on Brown St, some of the more than 100 that operated during the gold-mining peak, old cottages and Pollen St’s original shopfronts.

Heading towards Tairua on SH25A arrive at Broken Hills, reached via Puketui Valley Rd, where gold was discovered in 1896. By 1912, the site was a bustling gold-mining settlement. Regenerating bush now hides a number of relics. 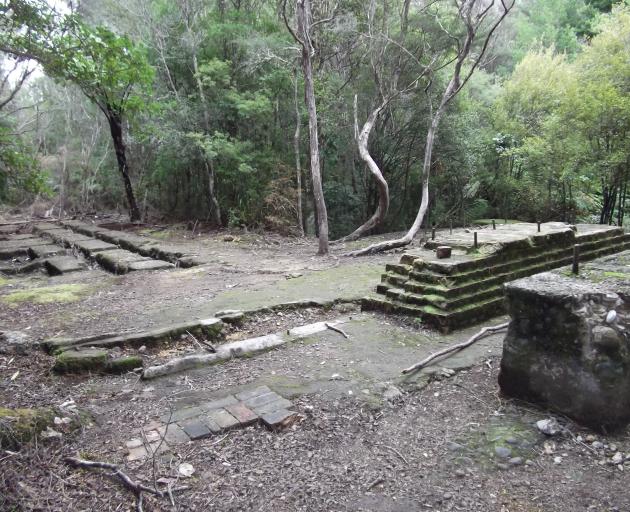 The remains of the Broken Hills Battery.
For a short walk, park at Bridge car park to access the Broken Hills Battery Walk, which leads to the brick foundations of a water-powered stamper battery and passes a dim mine opening. The walk joins up to Gem of the Boom Loop, through tranquil bush to a flat area where a settlement was located. A rock alcove nearby was the jail.

Park at the road end, past the Doc camping ground, and take the Water Race Tunnels Track to walk through three water race tunnels, or for an about 3-hour hike (steep-ish in places) add in the 500m Collins Drive Tunnel. Pitch black, it’s like an Indiana Jones setting with boarded up mine shafts, cave weta and sprinklings of glow worms. Rusting hopper tracks lie discarded nearby. Be sure to take a torch; an ultra violet light will pick out ore, pinpricks of red and green.

Back on SH26 and heading south towards Waihi, you’ll wind through scenic Karangahake Gorge. Stop at the Karangahake Domain car park for the easy, 1 hour Windows Walk Loop. Gold was first discovered here in 1875 and today there are numerous information panels and gold-mining relics such as the remains of the Talisman Battery, old machinery and a rusting tram trolley. Follow old tram tracks through dark, low-ceilinged mineshafts where windows blasted in the rock wall, used to tip tailings into the Waitawheta River Gorge far below, give a little daylight and views over the narrow gorge and the Crown Walkway hugging the opposite, stark cliffside. A swing bridge crosses the river to allow a return along the walkway. 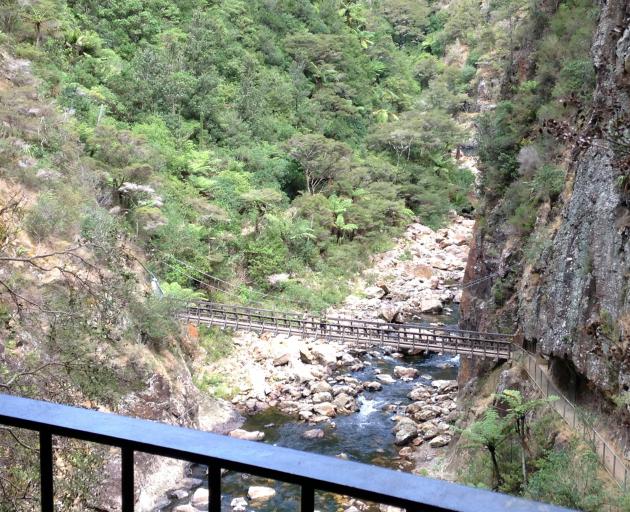 Window’s Walk in Karangahake Gorge.
The flat, about 13km, 4 hour return Historic Walkway to Waikino starts from here, too. A section of the Hauraki Rail Trail, it can also be cycled and follows the old railway line that ran from Paeroa to Waihi. A torch is required - it begins with a dark journey through the 1.1km Karangahake Tunnel. Following the picturesque Ohinemuri River, the trail leads to Victoria Battery built in 1897 to crush quartz. There are information boards detailing the history and workings, and among the remains are those of the stamper mill, cyanide tank foundations and ore kilns. The Victoria Battery Tramway Society offers underground tours of the kilns and of the site on a narrow gauge tramway. A museum features historic photographs, ore stamper and gold-mining equipment.

Located in the old Waikino Railway Station, Waikino Station Cafe, a short walk away, makes a good stop to rest and refuel before returning, or cyclists could continue on the Hauraki Rail Trail to Waihi. Goldfields Railway also runs a fun, 30-minute train ride to Waihi from here.

Finish trailing through gold history at Waihi. The town sprang up after gold was discovered there in 1878 and continues to be mined at Martha Mine. The Gold Discovery Centre offers interactive displays of modern mining, as well as taking visitors back in time with models of old Waihi to discover the town’s gold story. It’s easy to lose an hour or so here and another two hours on a tour of the mine learning of its operation and mining processes.