The east entrance of the caves in its grandeur. Photo: Nick Brook
Although Clutha Leader reporter Nick Brook has lived in Dunedin and Clutha for a decade, the Catlins’ Cathedral Caves have eluded him. Over the holidays, he decided to remedy that and take a closer look.

Many times on the road driving deeper into the wild coast past Papatowai I passed the access track to the Cathedral Caves, but the gate was always closed.

There was another barrier too: the incongruity of first having to exploring a remote, rugged, semi-legendary landmark on the internet — the idea of making an electronic booking with nature. 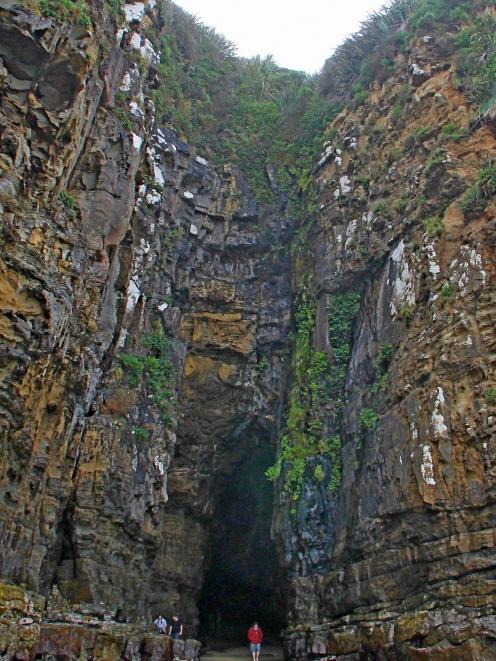 Between tides, the crack of the west entrance is guarded by a moat and parapet. Photo: Nick Brook
At last I found a phone number and had the pleasure of a local voice giving local advice on how to begin my experience, and I left Balclutha at 7am to arrive for the recommended time of 8am on New Year’s holiday Monday.

I’ve worked in tourism and knew the Catlins coast had become a poorly kept secret by at least 2019, and if the tourism sector ever returns to normal I suspect the Gore and Balclutha information centres will be directing many a camper van east to get ‘‘off the beaten track’’.

In the meantime, the Southern Scenic Route still seemed pleasantly deserted south of Owaka, curling through bush and hills beyond Papatowai.

The steel and wire farmgate was open and the broad and easy gravel track led through native bush to a car park furnished with toilets and an office building staffed by Robyn Shanks, who had the site well under control and collected the fee of $10 per adult.

Safe access to the Cathedral Caves is dictated by the long reach of strong tides, and the keepers of the caves aren’t taking any chances.

Robyn must have heard every latecomer’s excuse and last minute pitch a hundred times and clearly knew how to give ‘‘no’’ for an answer.

There was a 10-minute bush walk downhill to the beach where the air above the bay was hazy white and I was impressed by the wide expanse of wet sand flats.

Long, low hedges of bubbling foam rode endlessly in from the ocean, shimmering to glassy sheets that slid still closer and closer towards the piled dunes.

The southern view beckons with intrigue but could never compete with the instantly visible hollows in the nearer northern cliffs.

They gape irresistibly as though the beach wind blows from them, and in another light might seem menacing but for the many cheerful, brightly dressed sightseers sucked in towards them.

At low tide, the sea still reaches the Cathedral Caves. Photo: Nick Brook
Arrival at the openings reveals the high-tide watermark up against the rock, a reminder that you can only be a visitor here.

The cliffs have faults and weaknesses the pounding sea seeks out and scours, boring endlessly deeper, undermining, collapsing and dissolving.

The mechanical action of surf against the mixed, 160-million-year-old sandstone has in only tens or hundreds of thousands of years excavated two tunnels, which joined to form the main cave passage at 199m, putting itin the top 30 longest sea caves in the world. 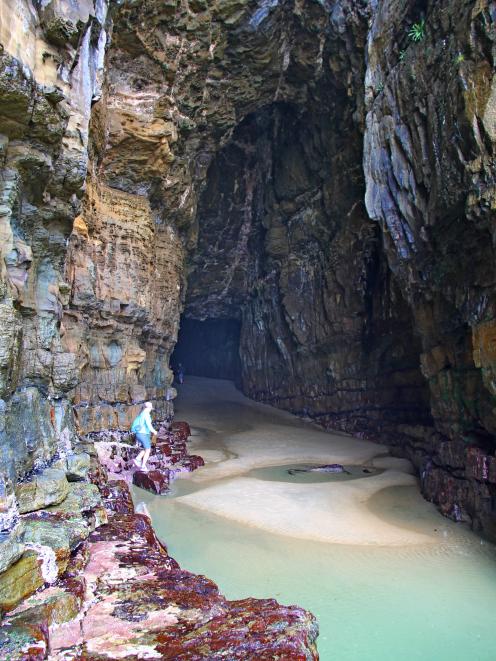 The beach north switches to a sandstone moonscape, seeming to rise then ending abruptly, barred with scrubclad bluffs above and wavechurned kelp forest below.

Archaeology shows life in the area was harvested by the earliest settlers more than 600 years ago, probably from the more hospitable Owaka and Papatowai areas.

For the modern-day explorer with an eye on the tides, the only option is to turn back.

You pass again the chasms and dawdle around the vast east entrance.

Seawater ponds, still against the walls of that chamber add to the growing, forbidding feeling.

Soon the sea will return, unstoppable as night, to flow through the caverns and continue to feed on them.

Regardless of your retreat past the car park signage, the camper vans and the websites, you know the Cathedral Caves belong to the ocean.