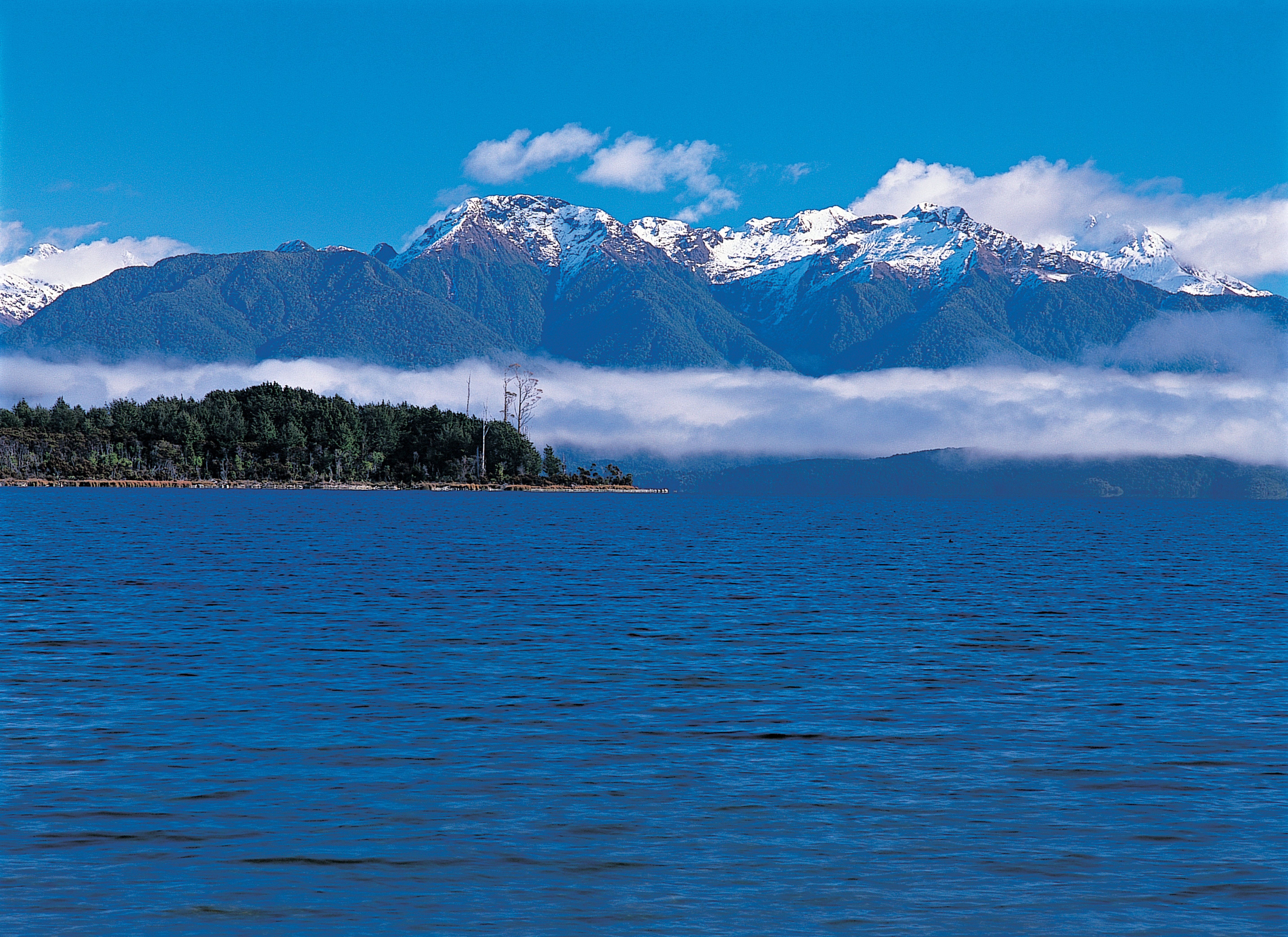 Often bypassed by busy visitors, this long valley running along the Waiau River from Te Anau to Tuatapere  gives access to some of New Zealand’s most impressive scenery, writes Peter Janssen in this edited extract from A New Zealander’s Guide to Touring Natural New Zealand. 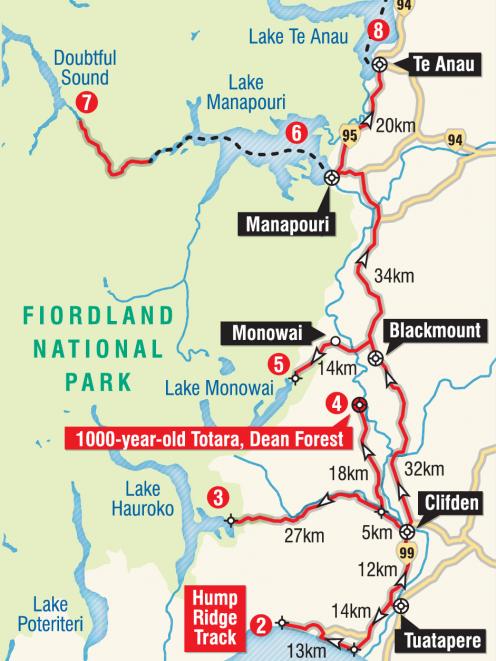 Te Waewae Bay is a marvellous sweep of wild beach with nothing between its shores and the Antarctic ice. To the west the snow-tipped mountains of Fiordland loom over its frequently storm-tossed waters.

The bay is home to a small population of Hector’s dolphins and whales are occasionally seen close to shore.

The beginning of the track is at the end of Papatotara Coast Road, 27km from Tuatapere.

The Hump Ridge Track is the only track that provides access to the southern area of Fiordland National Park. Combining coastal vistas and wildlife with several of the few human interventions in the park, highlights are the spectacular Percy Burn Viaduct — the largest wooden viaduct in New Zealand — and the remains of Port Craig, a once lively sawmilling town.

The entire track takes three to four days, but helicopter and boat options can shorten the trip. Track information and permits are available from the information centre in Tuatapere (www.humpridgetrack.co.nz).

Return to Tuatapere and drive 12km north on SH99 to Clifden. Turn left into Lillburn Valley Rd. The lake is 32km from this point, 20km of which is gravel and rough in parts.

One of the few accessible points in the southern area of Fiordland National Park, at 462m Lake Hauroko is the deepest lake in New Zealand and one of the 10 deepest lakes in the world. Set within the wild and undeveloped mountains, the long gravel road deters most visitors, creating a place of quiet beauty.

There is a three-hour walk through beech forest to a lookout point on the lake’s northern side, and the Dusky Track begins from the head of the lake and can be accessed by (prearranged) boat or guided walk. While there is a boat launching ramp, be aware that the lake is subject to very high winds and can quickly become extremely rough.

From Clifden on SH 99, drive towards Lake Hauroko, and after 5km turn right into the Lillburn-Monowai Road. The forest is 18km down this no-exit gravel road.

While it’s a long drive down a gravel road for a relatively short walk, the trees in the Dean Forest are truly majestic. A massive 1000-year-old Hall’s totara looks every bit its age, but is quite at home among the ranks of other mighty old trees that include rimu, beech and kahikatea. The trees are thickly hung with mosses, the ground is totally covered in lush crown ferns, and the forest rings with the sound of the bellbird.

The loop walk is flat and takes no longer than 20 minutes.

Return to SH99 and drive north for 32km to just past Blackmount. Turn left and travel 14km to the lake; 7km of this road is gravel.

If for no other reason, this lake should be visited because it is a prime example of the long-lasting damage wrought to the environment by careless development.

The Monowai Power Station was built in 1925 and the lake was raised to provide sufficient water, but over 80 years later the disastrous results of this development are still evident in the stumps and logs of the drowned forest visible along the shoreline.

Created by a long-vanished glacier, the lake is long and narrow and surrounded by high mist-shrouded mountains cloaked in virgin beech forest.

Much less developed than Te Anau, at 440m this is New Zealand’s second-deepest lake. With over 34 small islands and numerous bays leading deep into the heart of the Fiordland mountains, the lake maintains a certain air of mystery.

In 1970 it was at the centre of one of New Zealand’s greatest conservation battles, the ‘‘Save Manapouri’’ campaign, which opposed plans to raise the level 30m to increase power generation.

Over a quarter of a million New Zealanders signed a petition to save the lake and the issue had a significant impact on the 1972 general election, which saw a Labour government elected on a platform that included leaving the water level unchanged.

The eastern shore of the lake is drier, more open and flat, radically contrasting with the misty forest-covered mountains to the west. Several operators offer boat trips from the very pretty Pearl Harbour, where kayaks are also available for hire.

Several operators run a variety of trips across Lake Manapouri to the West Arm, then by bus over the Wilmot Pass and down to Deep Cove on Doubtful Sound.

After Milford Sound, Doubtful Sound is the most accessible of the Fiordland sounds. Yet with far fewer visitors than Milford, this sound has a greater unspoiled feeling. Home to fur seals, Fiordland crested penguins and bottlenose dolphins, the 40km-long fiord (Milford is just 16km) is also the deepest at 400m. 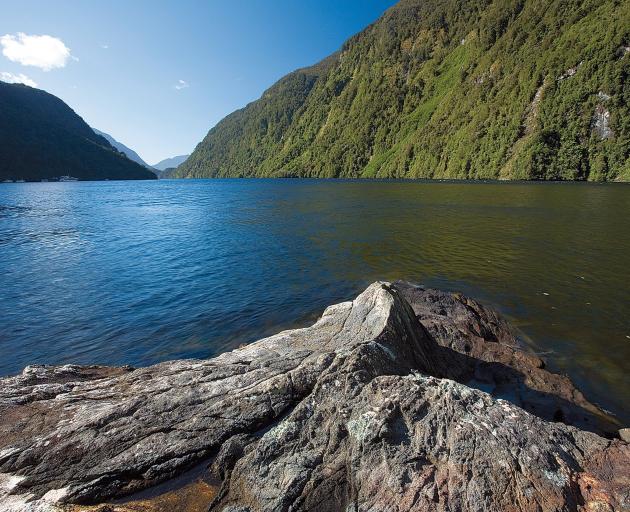 Covering an area of 344sq km and 65km long, Te Anau is the largest lake in the South Island and the second-largest in the country after Lake Taupo. The east and west sides of the lake could not be more contrasting. To the west the rugged Kepler, Murchison and Stuart mountain ranges climb over 1500m and are snow-clad in winter and bush-clad at the shoreline.

Three arms of the lake — somewhat unimaginatively named South, Middle and North Fiords — reach deep into the mountains, while to the east the landscape is flat, open and much drier. At the southern end of the lake where the Kepler Track starts there is an easy shore walk through wonderful beech forest to small beaches at Dock and Brod Bays.

The Te Anau Wildlife Centre is an open park on the lakeside in the Te Anau township with various aviaries containing native birds, some of which are not easily seen in the wild.

These include takahe, weka, kaka, kea and kakariki.

Some of the birds here have been injured in the wild or are part of a bird rearing programme to boost the population before being returned to their natural habitat.

A combination boat and cave trip, the glow-worm caves lie directly across the lake from Te Anau township and are the most impressive caves outside Waitomo.

Operated by Real Journeys (www.realjourneys.co.nz), the two-and-a half-hour tour starts with a boat trip to the western side of the lake, followed by a short bush walk, and ends with a trip along an underground river through the caves.

While known to early Maori, the caves were only discovered by Europeans in 1948 and consist of caverns, rock formations and a glow-worm grotto accessible by boat. 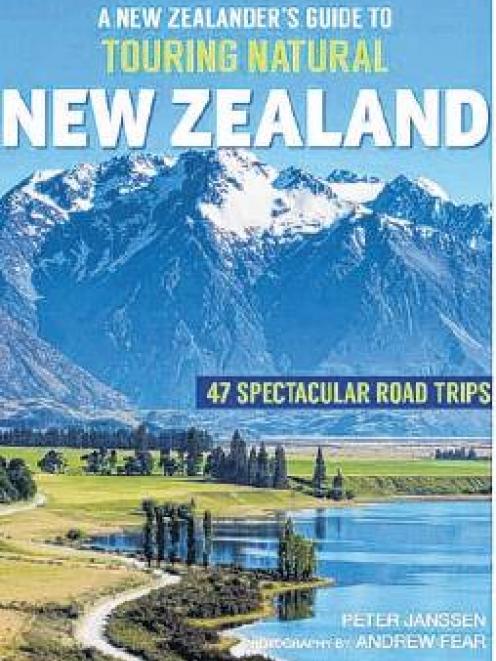 GETTING THERE
Tuatapere, the starting point for this trip, is a small township near the mouth of the Waiau River in western Southland, 87km west of Invercargill and accessible by a good road (from the north the route is southwards from Manapouri).

The heart of this trip runs south to north along SH99, which is a good sealed road, although some of the side trips journey through rougher gravel roads.

BEST TIME TO VISIT
Summer and autumn is a good time in this region, and as the area doesn’t attract a lot of visitors, the places described are seldom too busy or crowded. Winter and early spring can be cold and wet, and the summers are at best mild.

FACILITIES
There’s not too much of anything along this route, so if you intend to stay in the area you will need to bring camping gear and your own supplies.

There are basic camping grounds at Lakes Hauroko and Monowai, and while Tuatapere has a sprinkling of places to stay and eat, there’s little else apart from a few general stores and a very famous butcher’s.

However, Te Anau and, to a lesser extent, Manapouri at the northern end of the trip have plenty of accommodation, places to eat and a reasonable range of shops and services.

BEFORE YOU GO - SANDFLIES
While sandflies are found all over New Zealand, in Fiordland it sometimes feels like they reach plague proportions. Fortunately they are easily deterred by insect repellent readily available from supermarkets, chemists and general stores. 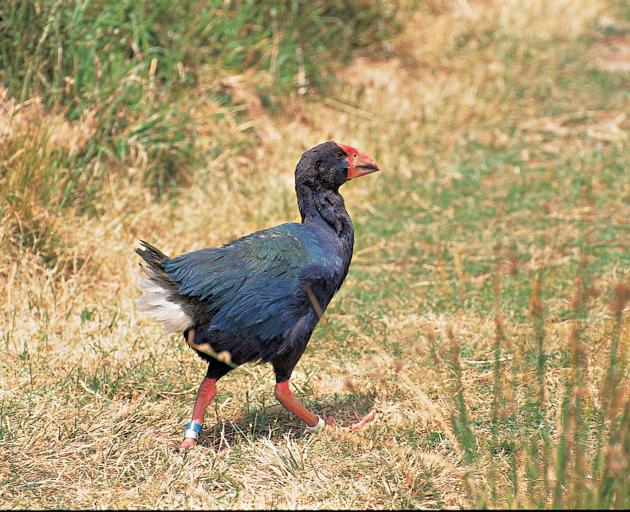 The Murchison Mountains, between the South and Middle Fiords of Lake Te Anau, are the last mainland bastion of the rare takahe (Porphyrio hochstetteri).

There were only four sightings of the bird between 1800 and 1900, so by the early 20th century the takahe was thought to be extinct.

However, ornithologist Dr Geoffrey Orbell was convinced a population still survived and he spent over 15 years searching for takahe, a quest finally rewarded in November 1948 when he rediscovered the birds in the Murchison Mountains.

Closely related to the pukeko, the takahe arrived in New Zealand several million years ago from Australia. Gradually becoming taller and bulkier than the pukeko, in the absence of predators it also became flightless.

Takahe plumage is similar to that of pukeko, ranging from turquoise through blue to iridescent purple, with the same distinctive white tail feathers.

Once widely spread throughout both islands, the arrival of humans led to the extinction of the North Island species and in the South Island the bird took to its last pocket of refuge in the Murchison Mountains.

Even here numbers have dropped radically from the estimated 200 pairs in the early 1950s to just over 100 birds today, mainly due to predation by stoats.

Although the birds live a long time and several new populations have been established on offshore islands, unfortunately the small gene pool has resulted in inbreeding and low fertility.