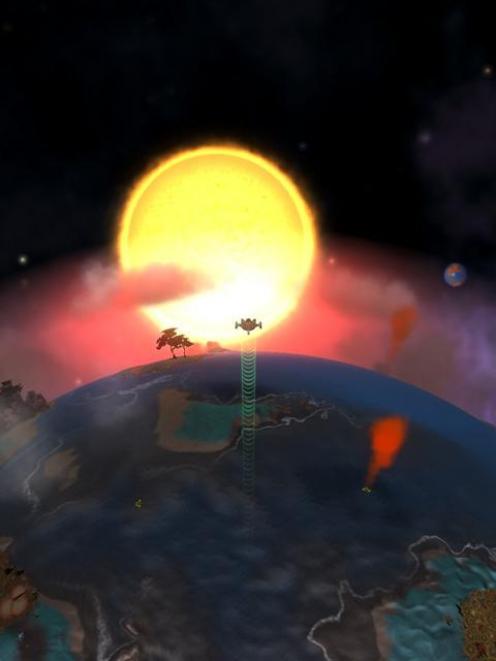 After years of delays, the universe is set to begin - and it's about time.

Spore is an ambitious and long-awaited computer game that takes on the broad topics of life, the universe and everything.

For publisher Electronic Arts, the unusual game is one of the biggest debuts of the year.

Expectations for Spore are high because the game's lead creator is Will Wright, an innovator in the industry who is known for taking unlikely-seeming topics and turning them into addictive experiences.

Wright's previous hit, The Sims, stands as the best-selling computer game of all time and was a cultural phenomenon that drew many of its biggest fans from outside the industry's stereotypical young, male demographic.

As a fixture on the top of software sales charts for two years after its release in 2000, the franchise sold more than 100 million titles - bringing in billions of dollars in sales.

Whereas The Sims let players control the daily routines of human-like characters as they went about their careers and social lives in a suburban setting, Wright's new title, which has been in development for six years, ranges a bit wider in its subject matter.

In Spore, players oversee the evolution and development of a species, starting from its earliest moments as a multicellular organism floating in a puddle.

The game's powerful design tools allow players to follow their imaginations and create a giant race of friendly-looking teddy bears, if they like, or monsters that look as if they might have been plucked from a horror movie.

If certain games are about giving players a sense of control and power, then Spore is the ultimate expression of the urge to play God.

"We wanted to impose as few limitations as possible," Wright said.

"If you want to make a creature without a mouth, you can; they just starve off the bat."

Frank Gibeau, president of EA Games, the division of Electronic Arts that owns Wright's studio, said the company saw many possibilities for this new franchise.

"This is going to be a long-term business for the company," he said.

"I think of Spore as a platform that we want to build over multiple years."

In addition to a version designed to run on computers with Windows or the Mac operating system, EA is also launching versions for the iPhone and the portable Nintendo DS game system.

Versions for game consoles, such as the Nintendo Wii, are in the early stages of research and development, though the company isn't ready to say when those might become available.

A version that could be played in a browser window is also under consideration.

But it would be something of a feat for Spore to live up to the hype surrounding it.

Wright's fans expected this game years ago, but its release was put off as the design team tweaked it and incorporated new features.

Although Gibeau would not comment on the size of EA's investment in the game, industry analyst Michael Pachter, of Wedbush Morgan Securities, said he believed Spore's development cost in the neighbourhood of $US50 million.

Even at such a price tag, Pachter said, he expected Spore to be "wildly profitable".

In theory, every Spore player will encounter a unique of mix of species over the course of the game.

That's because as a player's creations evolve, they are periodically uploaded to the Internet and added to a comprehensive online roster called the "Sporepedia".

Players can either choose which species they want downloaded to their virtual universe or let the game automatically download a range of life forms.

Wright said his new game was closer to social networking sites, such as Facebook, than to online multiplayer games, like World of Warcraft, in the way Spore depended on its users to create much of the compelling content.

Pachter agreed that the shared-user-creativity aspect of the game might be its most intriguing feature.

"What is interesting here is not the fact that Will Wright made another game but that he made a game that has an element that has never been in any game ever," he said.

Spore's software leaves it largely up to the player whether a species will thrive as a result of befriending neighbours on its home planet - or, alternately, hunting them down for food.

As a species begins to thrive, players earn "DNA points" that can be spent on developing better versions of next-generation creatures.

A certain type of leg or foot might make a player's creature run faster or jump higher.

The development options a player is shown are based on his or her previous rounds of choices; a teddy-bear species wouldn't be able to quickly evolve into a two-headed-snake species, in other words.

As with The Sims, there isn't a way to "win" the game.

As a player's pet species develops the technology to venture into space, Spore users can keep exploring the virtual universe for as long as they wish.

EA released a bite-size version of the game this year to players eager to try out the game's creature-creation tools.

As of late last week, there were about 4 million virtual species listed on the Sporepedia.

So in a way, Spore isn't done yet, even if it is finally about to reach retail shelves.

"It feels good to get it out the door," Wright said.

"[But] this is the point where the fans pick up the game and finish it for us."